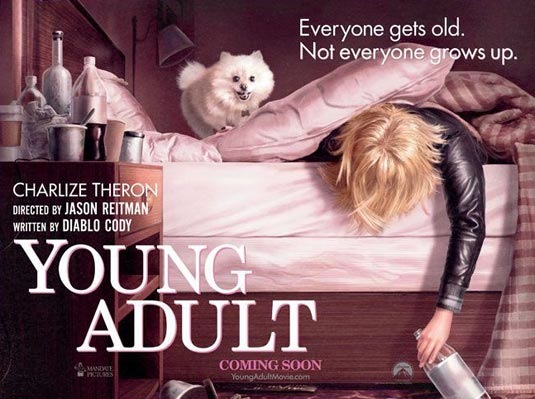 Cody and Reitman Grow Up with Young Adult

Recent films rely on one convention.  It’s sad but almost every Hollywood film is about character redemption.  We love seeing someone with a problem they must overcome.  We love going from liking them to loving them and we get catharsis from the sunset that brings everything together in the end.

What makes Young Adult such a great film is that it knows what you want and refuses to give it to you.  This is not a film about closure.  It’s a film about the inability to close.  It stars Charlize Theron as Mavis Gary, your typical twenty-years-after-Prom Queen bitch.  She’s grown up, moved out of her Podunk town, and makes her living ghost writing a young adult book series about girls in high school. Though the movie starts slow it hits its stride around minute fifteen and never lets up.

If you were going to give this film an incredibly basic plot ,it’s about Mavis’ return to her hometown to rekindle and recapture her former glory by getting back together with her high school sweetheart.  The only problem is he is happily married and has a new baby. Along the way, our antiheroine meets the typical nerd who used to be in love with her (played by Patton Oswalt in a performance that I’ll easily call one of the biggest Oscar snubs this year) and a few women who still hate her.

Not to belabour a point, but what makes this film brilliant is its refusal to be what you want it to be.  Mavis is not home to learn a lesson, she has distinct intentions of breaking up a marriage, reclaiming what she believes is rightfully hers, and then leaving again.  Mavis is an alcoholic, has a dirty mouth, and lives off diet coke and fast food.  She is so evil we enjoy watching her, but there are points she is so sadistic it’s hard for us to continue to sympathize.

This film’s biggest flaw is also its greatest strength; it has created a lead character so complex and dense it’s impossible for the audience to give her any semblance of love.  We watch hoping she will fail but in the end we are forced to examine our own failings with her.

Penned by Diablo Cody and Directed by Jason Reitman, the film is full of an interesting blend of extreme close-ups and devastating monologues.  Unlike in her previous screenplays (I’m lookin’ at you, Juno), here Cody relies more on realistic dialogue and nuanced speeches.  Reitman, to his credit, lets the actors work in longer takes.  He keeps the camera moving and often shoots wide enough to let us react to the body language of the performances.

Many will find the ending of this film to be unsatisfying and astringent.  It is.  It’s not the fault of the filmmaker; rather, it’s because of maturity in the narrative that is not reflected upon the characters.  This is a movie about how diluted life is, but it forces the medicine with a strong after taste.   It will stick with you for days and make you feel better about your own life, but the pill you swallow is most certainly a bitter one.