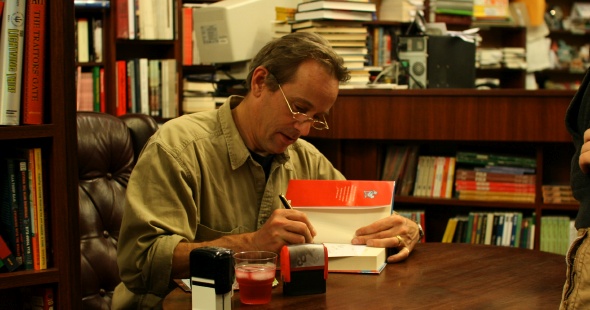 This part is a ramble/rant, but bear with me. Okay, so this may or may not be clear to you already, but just in case you missed it, or are new to my reviews, let me just lay this out for you: I am picky. When I like things, I LOVE them, and when I don’t… I usually really don’t. And for me, good writing is, yes, about good story-telling, it’s about intricate, specific characters, but it’s also about style. If the language isn’t well crafted, I have a much harder time staying interested in the book, and I’ll probably never LOVE it.

And that’s just me, but anyway, the point is, I’m a picky reader, so when I find a book that manages to meet all of my criteria, I get super excited and start to hope (dare to dream) that the author of the book I’m reading has written other books like it. And sometimes I’m bitterly disappointed. I find out, “Aw shucks, this author has only written that one book,” or that I like the random outlier in their oeuvre that isn’t about dairy farmers (don’t worry, the dairy farmers thing hasn’t actually happened to me. That would be truly upsetting). Or I’ll find that the author has what I call The Neil Gaiman Problem.  I know, I know. You, dear reader, are probably saying to yourself; “But you’re a nerd-girl!! How is it possible that you do not worship at the alter of Neil?!” And here’s the thing: I used to. As a younger nerd-girl, I loved Neil Gaiman’s writing, and I still think that each novel, taken as a stand-alone, is pretty great. But as I read more of his stuff, I became more and more tired/bored of the sameness—the stories always end nicely wrapped up for the well-meaning, somewhat bumble-tastic heroes, the girls are either too ethereal for life or interchangeable, and the sense of magic in the worlds feels pretty much the same—the universe as written by one author can be awful constricted. So that’s what I call The Neil Gaiman Problem.  And I realize that this isn’t entirely fair to NG (especially because, by all accounts, he seems like a really cool person), because most authors write the same world, or write books that feel the same—I mean, for heaven’s sakes, they’re just humans, and they’re writing the stories they like and believe in. And I rationally understand that, and empathize with the author—but in the end, the phenomena still just makes me enjoy the books less. And I think the reason that The Neil Gaiman Problem, specifically, is such a thing for me, is that the bittersweet-dark-magical-realism thing that is his niche just shares too much overlap with the work of other artists with high recycle rates, like… everything Tim Burton’s ever made (except Big Fish. Which was stretching his comfort zone and AWESOME). So I get tired of that particular flavor-combo extra-fast.

As you can see, my life is filled with struggle. So, when I do finally find an author with multiple books that I like, I tend to read all of them (or try to), and just pray that the NG Problem doesn’t arise. And from now on, when I find one of these elusive beasts, I will let you know by sticking an Author Review up here on the site.

And happy news, everybody: I have found one such author!!! Yes, this is cause for jubilation throughout the land. Run through the streets, spreading cheer and joy! Anyway, I’ve been reading this author for years, and while his books are all definitely his style, he has multiple series (each of which has its own, slightly different feel to it), puns-galore, snappy jokes, fun characters, and detailed worlds. I happily devour one book right after another.

The Author In Question: Jasper Fforde.

A contemporary author, he started publishing in 2001, with his first novel, The Eyre Affair. Apparently he used to work in the movies. He’s currently working on four separate series of books. My favorite series has only one book out, with no announced release date on the sequel. He makes my heart hurt. He lives in Wales, so sometimes impatient people (mostly me) have to deal with UK publication dates vs. US publication dates.

a) The Thursday Next Novels

This series is a mix of fantasy, sci-fi, crime, and comedy. It’s set in an alternate universe of 1985 London where our hero, Thursday Next, is a Literary Detective, where people get erased (The ChronoGuard gets complicated), and where the pet of choice is a genetically resurrected Dodo bird. It was my initial introduction to Jasper Fforde’s work, and it’s absolutely engrossing. I don’t want to spoil things, but in the first book, Thursday gets inadvertently(ish) sucked into Bronte’s Jane Eyre. No, even in alternate-universe-1985-London, that’s not normal. And we go from there. No metafictional experiment is too big, and no pun is too small. You should go read these now. (Additionally, the author’s own recommendation for anyone who hasn’t read his stuff before is to start with The Eyre Affair. Start at the beginning).

b) Shades of Grey

This series (currently just the one. But he’s promised to write more… eventually) centers around Eddie Russett, and his troubles in a post-apocalyptic world. But wait now, this is not just any post-apocalyptic world—this one revolves around a chromotocracy, where everything—the government, jobs, and basic social structure—is determined by what color an individual can naturally see (and how well they can see it). Our hero, Eddie Russet (a Red) starts the book upside-down in a man-eating tree, and as he back-tracks to tell us how he got there we meet Jane (a Grey), get suspicious about some chromocorruption/why-the-post-apocalyptic-landscape-is-the-way-it-is stuff, and eventually find out how Eddie got to the point where he got stuck in a yateveo (the carnivorous tree). Also, spoons and barcodes are important.

I love this book. It’s weird, clever, funny, and full of characters I over-associate with.

WARNING: If you get easily emotionally invested in books, the end of this book will be… unfair feeling (at least, without a published sequel. Please, JFf, put a girl’s heart at ease). I don’t remember what exactly I did when I read the end, but I do recall being in a public place of some sort and causing a minor disturbance. Just so you’re prepared.

These novels are sort of spin-off’s from The Thursday Next Series, but they can be read by themselves. Like The Thursday Next books, these are also funny literary fantasy sci-fi crime novels, but they are less Literary (with the imposing capital “L” and lion statues out front), and somewhat more humor-driven. Actually, they’re generally just a little bit looser than The Thursday Next books—like how a blues melody is just looser-feeling than any other kind of music. I really enjoy these books, as well. These focus on Jack Spratt, a Nursery Crime Detective of the Reading Police Department (when I said no pun too small, I was serious). These are not the nursery rhymes you knew—they have a decidedly noir tint at times—and there’s a lot more general crime and intrigue than I remember. The first one’s about what really made Humpty have his great fall.

a) The Dragonslayer Series

I haven’t gotten to them yet, but apparently they’re YA books. They’re on my list. Googlemaps, where is my nearest bookstore….