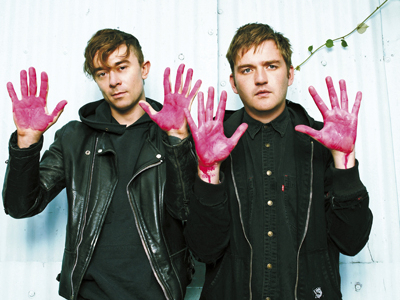 Artists To Bring In The Spring

As February comes to a close, the weather has been getting beautiful – unless of course you’re reading this from Oymyakon in Sakha Republic, Russia which has -3 ºF (-16 ºC) as its yearly average. Hopefully, you’re not there but even if you are, we went and found you some our favorite up and comers to welcome in the higher temperatures. An eclectic mix of hip hop, indie, & punk means there’s definitely something for everyone on this list and we promise you that you won’t need the heavy covers anymore when these artists warm your soul.

London-based duo, The Big Pink, has been around for a few years now. They released their first album back in 2009 and its electro-rock dancetude got them opening for TV On The Radio in no time. After a remix album called Tapes, Milo and Robbie came back with their latest effort Future This and nailed it. The album gives off this “Robert Smith writes LCD Soundsystem songs” and it’ll definitely make spring-cleaning a breeze. The track “Lose Your Mind” is definitely a highlight and a fun way to get into the layering The Big Pink offers. Robbie’s vocals drift over an ever-building array of structured samples and synths until it explodes into an anthem-like chorus.

On Bleeding Knees Club’s Facebook page, they have “skipping” listed under their Interests. The only thing these Aussies skip are their knees right into your face with this thrash-surf punk sound that’s all about stage dives and bar slides. Taking a cue from their mates in Wavves, BKC invites you to a shamalama beach show that’s outfitted with acid wash jeans and non-stop noise. A Ramones revival band for sure since ya know, according to lead singer Alex Wall, “we hate long songs.” Their 2010 EP Virginity is all about that sunburned fun. Expect this April’s Nothing To Do to give you plenty to beep-bop rock out to.

Our dreampop shoegazers from Brooklyn released their sophomore album late in January. Something was met with phenomenal reviews. Caroline Polachek channels her inner Mazzy Star as Patrick Wimberly paints soundscapes with ethereal textures. The twosome brought in Dan Carey & Alan Moulder to add even more depth to the hypnotic mood already in motion. Moulder, who you may know from his work with Depeche Mode or Nine Inch Nails has his dark, doom-stamp throughout the album while Carey brings in the dance-pop to balance. It’s a tight-knit effort from a loose, fun band that takes you to the 80’s and doesn’t make you feel weird about it.

One of the hardest, most overlooked rappers in the scene right now, to me, is Curren$y. Since 2009, the N’Orleans native has released six albums including his most recent Muscle Car Chronicles that just dropped this past Valentine’s Day. He’s got two more solo tapes that’ll be making their way out later this year along with ANOTHER TWO collaboration albums – one with Chuck Inglish of The Cool Kids and another with producer The Alchemist. Curren$y features some of the best production in business, especially when he brings in the local horns and samples some of the best second lines the south has to offer. These smooth beats play right into his laid back delivery. Curren$y’s drawl & twang is his appeal and it never tires – much like him.

Although this name may be completely new to you, you’ve heard Frank Ocean’s voice. Featured on one of the, if not the biggest albums of 2011, Ocean played an essential role on the opening hook to Watch The Throne. “No Church In The Wild” is a classic back and forth between two rappers while a third artist, an R&B artist, bridges the verses with smooth vocals. The Odd Future member is beginning to come out from between the lines and garner some critical attention since he just released his own debut mixtape Nostalgia, Ultra. And it’s well deserved. There’s this certain level of raunchy, dark, R&B Ocean’s hitting and I’m personally excited to see what he has to offer when he’s given a little more money and if the single “Novacane” is indicative to anything he plans on doing in the future you should be excited to.

Claire Boucher, born in Vancouver & now based in Montreal, is the force behind Grimes. And by force, I mean one to be reckoned with. The impressive blend of Lykke Li and Fever Ray, Claire weaves in and out of various genres of music throughout her latest album Visions. She channels Madonna at times, and then dissolves into a few noise-rock interludes but they all succeed in making a case for her interpretation of what music should be. It’s spastic and spacey but the sounds she goes within those spaces are impressive and allowed. They never push to one extreme and alienate the listener. Next time you’re doing dishes, put this album on and you won’t even know that you’ve been done for half an hour and started cooking dinner already.

Brooklyn folks know this Brooklyn folk band. The five-piece band has a deep skill-set, ranging from ukuleles to French horns. Being able to traverse any terrain in musical style, The Loom puts on an incredible performance throughout their 2011 push Teeth. It encompasses the home-grown feel a lot of artists are taking nowadays but adds such a polished feel to the do it yourself trademark that helps it transcend to a new level of accessibility. Keyboards and guitars talk and interact as naturally as the artists playing them, giving this sense of awareness and livelihood that gets lost in a lot of indie acts. There’s organic chemistry throughout and in such a deep-rooted way that it’s an astounding presence in any room. Enjoy them while you relax on your roof with a beer – the scope of the world will just make so much more sense.

Abel Tesfaye is a silent assassin in the music industry right now. Under the stage-name The Weeknd, his debut House of Balloons (which was only back in March of 2011) took his status amongst fans to a whole new level as he garnered critical acclaim for his sultry, R&duB sound. From there, he self-released two more mixtapes (Thursday & Echoes of Silence) and the Canadian killed it. Beautifully structured and seductive to boot, song after song brings you in, slows the world down, and makes you feel the “high from drugs & life” he’s prone to sing about. This music is sexy and knows it but doesn’t need to say it a thousand times. All I need to say is the kid does M.J.’s “Dirty Diana” justice. The Weeknd walks this great pop/hip hop/indie tightrope and it’s a splendid act to witness. Sample some of his work belowfrom the Polaris Music Prize nominee and understand what’s been missing from your iTunes library – since all of his albums are available for download FREE at his website: the-weeknd.com

Chicago native Willis Earl Beal is a lo-fi musician who will immediately draw comparisons to Daniel Johnston. The two do share a common thread in that the music is self-produced and home recordings. However, his depth is yet to be tested so we shouldn’t pigeonhole the man just yet. There are moments of Bright Eyes and Devendra Banhart in his debut Acousmatic Sorcery. With lines like “I’m still disillusioned and cool catatonic/Always in a daze without smoking that chronic,” Willis is able to hit home relatively quickly with a caustic sense of sad, self-worth. His voice melts against his simple picking of the six-string and it’s arresting. Be sure you’re ready for this because his songs cut like a bullet and leave you open to the elements.

So here’s to good weather and good tunes, hoping you bring in spring the way we are – new and with a sense of refreshment. The featured artists above are like you opening the living room window for the first time in months. Enjoy that breeze and relax in the sound because spring is here and we got nothing but warm times ahead.