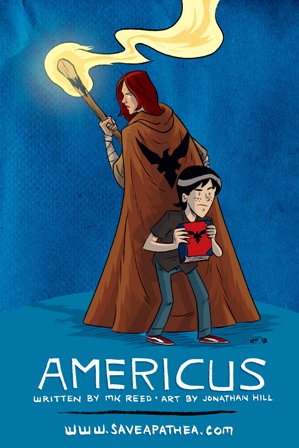 Americus is a YA graphic novel by MK Reed and Jonathan Hill, and IT’S FRIGGIN’ WONDERFUL. It has book wars, humorous depictions of various authority figures, unpretentious but nuanced characters, simple but expressive artwork, and a heck of a lot of heart.

I love the crap out of this book. I just used all caps—you know my love is true.

The book’s set in Americus, Ohio, and we begin with Neil and his best friend, Danny, at a rehearsal for their eighth grade graduation—it’s appropriately awkward—and follow them to the library (because they’re the best fictional 8th graders ever), where Danny picks up the latest installment in the fictional YA series, The Adventures of Apathea Ravenchilde (but the library only has one copy, so Neil has to wait, and Charlotte, the youth librarian/my personal hero tells them to hurry up so she can talk to them about it. Favorite).

Then stuff gets complicated fast—Danny’s mom catches him reading the book, and we realize that she’s one of those crazy people who thinks that fantasy novels will teach kids to be witches and wizards/go to hell (I hate this lady. SHE DESTROYS A LIBRARY BOOK! I feel personally affronted. Also, Harry Potter flashbacks, anyone?), then she and Danny get into a shouting match, then she decides that she’s shipping Danny off to some strange religious camp, and Neil is left alone (if you’re not counting Apathea Ravenchilde and her wolf sidekick, Selke) to deal with it all.

But Danny’s mom isn’t done. She decides to take it further—Danny is banished to military school, and she begins a crusade to ban The Adventures of Apathea Ravenchilde in the town library. Neil is basically left with a choice: to roll over, or to stand up. I’ll let you guess which he chooses.

Throughout the graphic novel, we switch between Neil’s life, Danny’s experience, and excerpts of the Apathea Ravenchilde series (if they ever actually make the Apathea Ravenchilde series, I’m reading it). Even if the plot of this book is fairly simple, it’s effectively done, really pretty touching, and personally, I found it wonderfully heartwarming (in a hope-for-humanity way). I also couldn’t put the book down—once I started it, I read it straight through (regardless of the fact that it was ludicrously late at night when I started and I really should take up acting like a grown up someday. But it is not this day).

In case you missed it, I have quite a bit of affection for Neil, and Charlotte, and the people on their side (the pro-Apathea, pro-uncensored books, etc side). But even with my overwhelming fondness for them, and even in light of my intense… dislike of Danny’s mom and her crew of crusaders, the authors did a great job of portraying Danny’s mom as a well-intentioned (if fundamentally misguided) person. She honestly believes she’s doing the right thing, and we see her struggling to make what she believes are the tough, moral choices. She’s still wrong, but she’s a much better character this way. Sometimes her dialogue is grossly on-the-nose (but this also leads to humor, so sometimes it’s pretty great) but all in all, the authors do try to cast her as a real person, and not just the wrong side of an argument.

I sincerely love this book, funny little quirks and flaws and all. It’s funny, sweet, straightforward, and smart. While it’s not without some teen angst, it’s cheekily self-aware about the angst, instead of oppressively FULL OF FEELINGS, OKAY?! It’s definitely the best YA thing I’ve read in a long while, and a pretty swell graphic novel, too. Read this book. It’s awesome, and probably good for your soul.