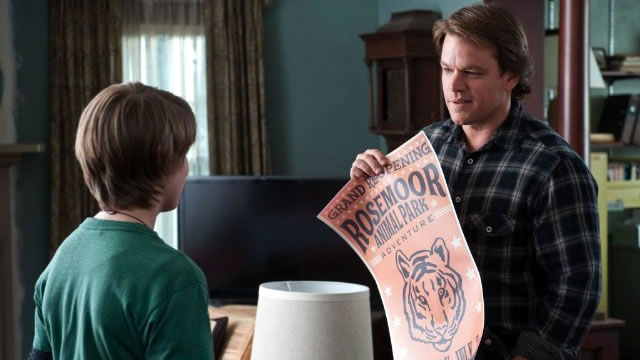 We Bought A Zoo

Cameron Crowe seems a long way away from his glory days in the late nineties/early oughts with this wishy-washy family film. The premise involves Matt Damon as a single father of two whose wife has recently died. Instead of doing the sensible thing like grief counseling, he quits his job and moves across the state to a dilapidated zoo run by Scarlet Johansson. If only we were all that lucky.

One thing Crowe still masters is an outstanding soundtrack of classic rock and indie faves that gives life to scenes that otherwise struggle.The film does have a promising premise, but it gets lost in the brooding “My Mom/Wife is dead” and “How can we save this zoo?” storylines.

The acting feels mostly phoned in, with the exception of Thomas Haden Church who looks like he’s having significantly more fun playing the asshole brother than Matt Damon is playing the befuddled father. Among the child actors, the female characters stand out. Seven-year-old Maggie Elizabeth Jones has real chemistry with Damon and is too cute not to make you smile when on screen. She’s underutilized, though, and Crowe forces her into what he does with most little kids- saying a bad word to startle the family audience. Elle Fanning shines as the love interest for Damon’s son, played by Colin Ford, but she has little to bounce off since the son is pigeonholed into being almost unlikable. Their budding romance is cliché and over-the-top and one has to wonder where the subtlety Crowe showed in films like Almost Famous has gone.

The zoo keepers try to make it lively, but ultimately we have a hard time caring for their unfulfilled romances and general well being. The typical Hollywood ending is so effortless you have to wonder if they phoned the whole thing in.

We Bought A Zoo is a family film that tries to hit all audiences instead of focusing on nailing one story. Like the people working at the titular zoo, the filmmakers’ efforts are spread too thin and ultimately they lose us.