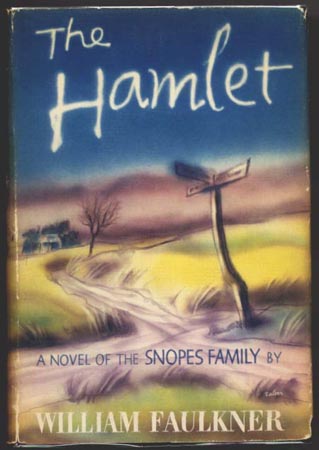 Faulkner’s The Hamlet is about a family of hicks (The Snopes) living in the boonies of Mississippi in a town called Frenchman’s Bend. The novel kicks off by introducing us to the town and giving us a little bit of backstory before bringing in the Snopes and launching us into a Southern, poetic, fablelike, and political self-creation story. It reminds me a bit of The Great Gatsby—but if we didn’t have Nick and instead cared more about a whole network of other characters. The book is the first in a trilogy of novels about the Snopes family, (and can be read after The Unvanquished) but it certainly stands alone as a complete, well-finished piece as well. I really enjoyed this book: it was dense and difficult at times, but also subtle, funny, and gorgeous.

If you’ve had trouble with getting into other Faulkner in the past (Benjy anybody?), fear not. The Hamlet still has WF’s symphonic, slippery, poetic modernism, but it’s less grammatically elusive than in The Sound and The Fury, and way less cubistic than in As I Lay Dying. Interestingly, WF wrote The Hamlet later in his career (a whole decade after AILD), so it sort of feels like he finally felt comfortable going for (relative) clarity in this novel and working less at the word-smithing. Basically, the story is about Flem Snopes as he tries to make himself into something more than white trash, and what happens to his family and the town as he tears down other people to build himself up. It’s similar to other plot lines WF’s written (there are definite echoes of Sutpen from Absalom, Absalom!) but this book felt more like a further examination on the theme of self-creation than a display of stylistic skill.

I’ll admit it: This was also the first time I really got Faulkner’s humor on my own, without someone having to point it out to me. And it had me chuckling consistently.

Beyond being suddenly funny, of all the Faulkner I’ve read so far, this book was also the most universally empathetic toward the characters. In most of WF’s other books, the narrator is really opinionated—people are sort of opaque, and therefore vague and mysterious, but less open to interpretation or empathy, you know? In this book, the narration is limited omniscient, and the novel felt very much like a series of vignettes. It doesn’t have the harshness of AILD’s chapter-breaks, or the sharpness of its character-specific narration—instead WF sort of pans to watch each character individually, and gives them a little more time and affection than he usually does.

I love these characters. Some are enigmatic and wonderful, some are crazy, some strong, some pathetic, and some are just damned, but all of them have fortes, faults and impact. As a network, they are a fascinating bunch—sets of families whose relationships are wonderfully murky, and townspeople who are either directly affected or invested in watching the outcome. V.K. Ratliff, a traveling sewing machine salesman, is my favorite—he’s witty, clever, a fantastic story-teller, and I’m not always sure of what he’s fighting for or why he’s fighting for it, but I’m convinced by his conviction. V.K Ratliff and Flem Snopes are in competition throughout the whole book, and the reason for their contest is, I think, only really known to them. Maybe WF knew.

There are some easy answers, but those don’t quite fit for me. In any case, there’s also an idiot man/child (not Benjy, I promise), who’s in love with a cow, and a woman who’s a lot like a cow (but oddly powerful?). WF wrote a couple of outstanding periphery characters, and often surprised me by investing large subplots in characters that I had initially thought were peripheral. The relationships in this book are also incredibly dynamic, fun, and subtle. My boy WF is not usually much for traditional dialogue, but in this book there are a lot of tense exchanges (sometimes with cheeky homages to Hollywood). As I was reading I just felt WF’s tremendous affection for these people and lineages, and the geography’s influence on their culture. WF clearly wrote the sort of people he found intricate and fascinating.

While it’s a little sweeter than some of WF’s other books, The Hamlet‘s still got that jaded, modernist-world-weariness. The tension between the beauty and the uncertainty of language means that sometimes there’s a relentless, almost brutal, frenetic smashing and crashing of words to convey the way a character is fighting to know what they mean, and sometimes there’s a soft, fluid, enveloping in the moments of waiting—when someone’s down and is waiting to make sense of the world again. The whole book has the sense that it’s driving at something—it has the abstract feeling of a destination long before we realize where we’re actually headed—it crescendos and crests beautifully. And I mean, don’t get me wrong, there are still sections of the book that are just chock-full of weirdness, is-this-really-happening?, and WF-wtf-are-you-doing?!?, but not as frequently as in his other stuff. And, personally, I got so invested in the language, and the characters and their struggles that I didn’t mind working a little bit for their stories.

I love this book—I don’t always like this book, but I care a lot about the language and the characters in it, and it’s now oddly important to me. Sneaky thing wormed its way in while I wasn’t looking. The Hamlet is not for everyone, but if you like beautiful language and a complex web of characters (and you don’t mind a little obfuscation), you should give it a try.