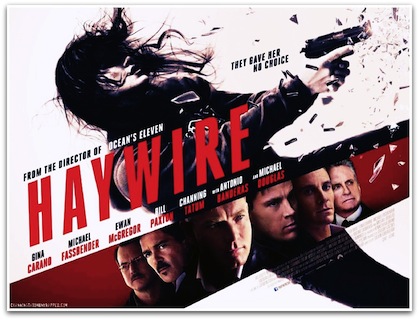 Few modern directors have the skill and precision to nail both large budget genre film and tiny indie projects. Steven Soderbergh embodies the concept of versatility with his second released film in under a year, Haywire. With his twenty-fifth film in twenty-two years Soderbergh branches out from his norm to the world of high action espionage and the new age kick-ass female action star.

It would be hard to name any films that move at the pace of or faster than Haywire. Those of you who caught the exclusive sneak peak of the first five minutes online will not be disappointed by the 85 minutes that follow. The film, told mostly through flashbacks, is the story of a black ops operative who is looking for payback after a betrayal. This sounds cliché and corny but the set pieces and nonstop edge-of-your-seat, hold-your-breath-and-protect-your-groin storytelling leave you gasping at the end.

In typical Soderbergh fashion, even the minor characters are played by big time celebrities and this all-star cast gives his Ocean’s films a run for their money when it comes to name dropping. Every part is played with nuance and snark. There is not much speaking in this film but when dialogue is delivered everyone seems to be on board with the rapid pacing. Michael Douglas stands out among many, as does Antonio Banderas. Even though their collective screen time is minimal they both make the most of their opportunities and help make this film work.

2012 looks to be the year of big action movies with The Dark Knight Rises, The Hunger Games, and The Avengers all slated for summer releases. Hopefully Haywire will not be lost among these names because only seventeen days into January it is easily the best thing about 2012.