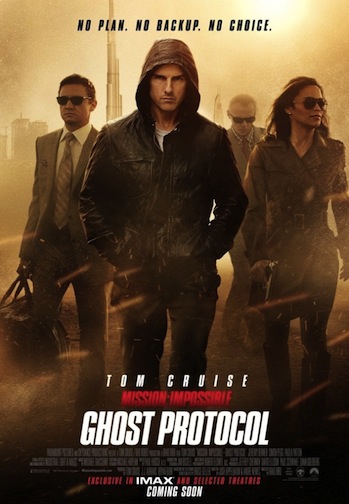 Brad Bird, the man behind such films as The Incredibles and Ratatouille, shifts from the realm of animation to live action for the fourth installment of the Mission Impossible franchise.

For those of you who haven’t seen the other three, fear not. MI4 is about as stand-alone as any sequel can get. If you’re looking for nuance and character development go elsewhere but if you’re into thunderous action set pieces and a downright amazing mix of special effects and live action stunts then you’ve come to the right place.

Tom Cruise returns as Ethan Hunt, secret agent extraordinaire, on a special mission to spy on the Kremlin and investigate the sale of nuclear arms. Along the way he assembles a new team comprised of Simon Pegg (for comic relief) and Paula Patton (for cleavage). After their first assignment goes wrong they pick up Jeremy Renner (who is there for an emotional kicker) and are forced into hiding after Ghost Protocol is initiated. While the film doesn’t do a great job of explaining what is actually going on, the costuming and cinematography helps us understand who the bad guys are and the nuclear weapons aid us in understanding the stakes.

The only actual bad part of the movie is the script, and any scene involving emotional repercussions. In an action movie where everything is over-the-top, it’s hard to see a man lean against the wall with one hand and put the other over his face while he shakes his head and pines over a woman. It’s hard to watch, but at least it’s interrupted by gunfire.

MI4 brings a new team together and that’s fresh. As mentioned before, Simon Pegg brings much-needed laughs to an otherwise overly dramatic plot. He highlights and steals many scenes. Paula Patton seems to only be in this film for low-cut dresses and legs but she does have a few good fight scenes and threads together a film that needs a softer side. You could argue her role is less femme fatale and more male gaze but she is efficient in her scenes.

Most of the media is focusing on Tom Cruise’s stunt scenes in Dubai but for me the best scene takes place in a parking garage. MI4 is truly non-stop action that is the definition of a popcorn film. The epilogue, though overly long at ten minutes, leaves room for the franchise to continue expansion. It’s a mission we hope they’ll accept.

Author’s note: I saw this film in IMAX and in 2D. It’s worth the extra five dollars.