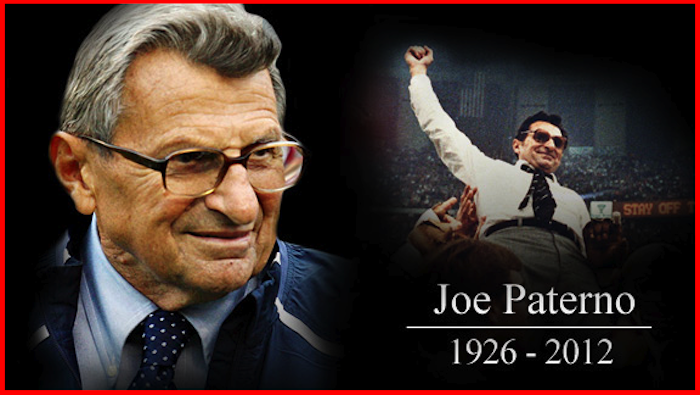 There will be a ten-hour viewing for Joe Paterno and not enough people will get to say goodbye.  There will be countless memorials, television specials, and I am fairly certain an eventual movie and none of it will be enough to encompass the man.  We will see books, paintings, and modern art masterpieces and they will never come close to describing a man who wore twenty dollar Nike’s and drove the same shoddy sedan for fifteen years.   We use the term “Legend” loosely but if ever there was a modern legend it was Joe Paterno.

Toward the end of his career many used the term “figurehead” to describe the man with the coke bottle glasses but there is a much more powerful truth everyone has failed to recognize.  The man who paced on the side lines, diagramed running plays from the press box, and eventually lay in the hospital to pass was not Penn State’s football coach, he was their king.

Joe Pa’s benevolent rule over the hearts and minds of the Nittany Lions lasted forty-six years.  He was the last American monarch, his black well-kempt wig in place of a crown.  Anyone skeptical of Paterno’s ability to wield a scepter need only look at the amount of time he kept Penn State’s presidents in check.  Even when rumors spread about his being replaced, the civilians revolted.  We loved out king and wouldn’t let some Plutocrat push him around.

Sadly, like most kings, Paterno’s legacy ended in failing.  One needs only to look at the story of Oedipus to see the correlation.  A beloved man in charge of a changing kingdom is forced out due to a fault he had committed years ago without the proper information.  The story of Joe Paterno is one part football and 99 parts Greek Tragedy.

Yet even at eighty-five JoePa wouldn’t let it go down that way.  For a man with every justification in the world to be angry at the cards he was dealt he spent his last weeks donating 100,000 dollars to the university and doing interviews where he wished his naysayers well and his fans peace.  For a guy who could have fallen into every stereotype of a bitter old man he resisted the urge.  Joe Paterno died regally.

When Oedipus was plucking out his eyes, Paterno was calling to the families of the abused and praying.  When his loyalists wanted blood it was Paterno who calmed them down.  The great thing about Joe Paterno is that he never bought into his own fame.  While others would have ruled with an iron fist Paterno used his prowess to help the commoners.  He based a football program that focused equally on victories and academics.  He treated his players like people not generic athletes.  He learned names, did his own recruiting, and drove himself to and from the facilities.  While other kings refuse to give up the throne, Paterno was willing to bow to another when the time came.

Let’s not forget who crowned Paterno.  We did.  Like any classical hero we placed the moniker of legend on his head.  Joe was fine being Joe.  He was our Lion leader but in his mind he was just a man.  A man who loved his wife, his kids, and his Penn State – in that order.

Just as we created Joe, we also are the creators of the myth that it was a horrible time to go.  We use terms like “died of a broken heart”, “killed by Sandusky”, and “sentenced to death by the board”.  Look around you; Joe Paterno did not die.  Legends never do.  All Joe did was finally find peace.  He may not be on this earth but his presence emanates in all those who are proud to call themselves Nitanny Lions.  His legacy is once again in our hands.   We lifted him up, we tore him down, and now it’s our time to mourn him.   We must grieve our fallen king without forgetting what Joe desperately wanted to know, “The only thing I have control over is to try to get our football team to play as well as it can play, and have them realize they are playing against a team which has talent, coaching and tradition.  Unless you’re stupid, you’ve got to understand that.”