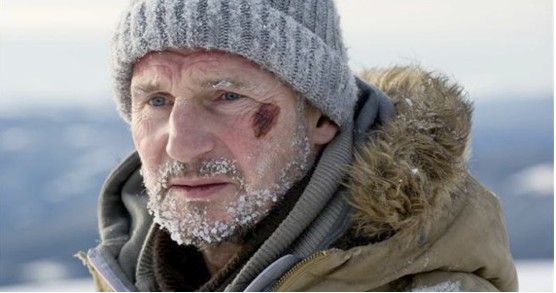 Liam Neeson in The Grey

The biggest problem with The Grey, Liam Neeson’s new movie about fighting wolves in the Alaskan wilderness, is simple, really. It’s the fact that you just walked into a movie theater expecting to see Liam Neeson fight wolves in the Alaskan wilderness – you’re ready to watch Neeson take out our lupine brethren using the same heated, intellectual efficiency with which he dispatched those who took his daughter in Taken. You’ve seen the trailer. You’ve probably got the movie all set in your mind in all its B-movie, testosterone-laden glory. And you’re going to sit through half the movie waiting for the trailer-spoiled moment when desperate Neeson straps bottles to his hands and goes punch for punch with a wolf.

And now the movie’s already been ruined for you.

The trailer for The Grey sets you up to think you’re watching a ridiculous action film, like Snakes on A Plane but with greater gravitas. But the actual movie is a much quieter meditation on men pushed beyond the point of survival.

The Grey follows the survivors of a plane crash (rendered in painfully realistic feeling detail) in the Alaskan wilderness. Amongst them, Neeson plays the de-facto leader, but he’s suffering from pain so great that prior to the crash he considered ending his life. The other men struggle with what it means to be beyond the reach of civilization and with slowly watching their compatriots die from exposure, injuries, and, finally, from brutal wolf attacks that spring out of the unfathomable white mass surrounding them.

The film rings palpable fear out of the vast and unchanging landscape, and, more impressively, manages to make each death feel as intense as the one before. The word “visceral” gets over used in critiquing action movies, but The Grey is the rare movie that earns the adjective, using all the weapons in its arsenal to put you in the place of each man as he surrenders to the wilderness around him.  You feel each death, and more importantly, you feel the moment when the situation wins and the man loses all hope of survival.

There are also a lot of macho and new-wave macho meditations on death and God that thankfully go unanswered for most of the narrative. The characters’ attempts to decipher meaning from the ruins of their plane and their coworkers mostly get swept away by the force of the narrative tumbling forward. Neeson’s character’s arc in his quest for survival is similarly understated. The movie plays with ambiguity in its ending; this adds authenticity and optimism to the film.

On a purely technical side, this movie is gorgeous. I’ve read other people complain that the wolves are clearly CGI, but I didn’t really find this a problem. And the way the camera finds pure terror in the blank landscapes of the North is akin to the use of darkness in the best horror films. The movie has a masterlock on tone and mood that carries us through the story.

But I started off by talking about that Damn Trailer. SPOILERS ABOUND. This is not a movie about punching wolves in the face and squaring off against the elements. In fact, that awesome trailer image of Neeson gearing up to fight the alpha wolf? Yeah, that occurs in the last five minutes, and it’s a cliffhanger ending. I groaned out loud when I realized that. And on top of that, the trailer pretty much robs the characters of any dramatic potential, since you can stand pretty assured by the trailers that eventually Neeson is going to end up alone, battling toe-to-toe with a wolf. Don’t get too invested in any of the other guys, kids, because we’ve still got some wolf stabbing to do.  And I, at least, spent half the movie wondering when it would stop being all slow and atmospheric, and start being a nonstop wolf killing parade.

And it’s too bad, because The Grey is actually a pretty awesome, action-y, contemplative, and gorgeous thriller. If you can put the trailer out of your mind, you might even be able to fully enjoy it.