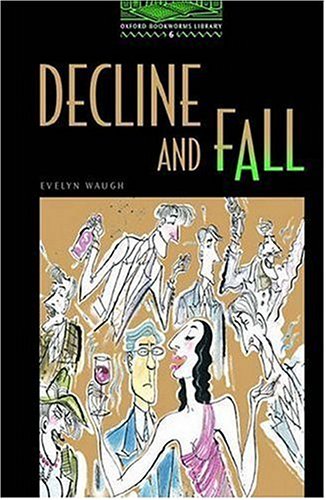 Decline and Fall by Evelyn Waugh

Evelyn Waugh was a British author best known for such novels as Brideshead Revisited and A Handful of Dust. He died in 1966, so he’s not exactly new news. Also, his books are on a bunch of “100 Best Novels of Blahblahblah” type lists. But I recently read Decline and Fall, Mr. Evelyn Waugh’s first published novel (apparently, his actual first novel was initially rejected for publication AND SO HE BURNED IT. Thoroughly sensible). Anyway, I read Decline and Fall, so I thought I’d tell you about it.

Over the holidays at various family gatherings I had a lot of small talk to make with a bunch of relatives. There was a lot of: “How was college?”, “You’re an English major, right?”, and “What have you been reading?”, etc. Anyway, in the midst of all of these catch-up conversations, one of my aunts asked me if I’d read any Evelyn Waugh. I hadn’t. I even told her so (I was very brave that day). Anyway, this aunt of mine felt that I should read something by this guy—I figured: he’s a fairly big deal, I’m big on reading the Important Books and whatnot, so I decided sure, why not?

A bit later, I was making a trip to the bookstore anyway (that’s just the kind of gal I am), so I picked up Evelyn Waugh’s Decline and Fall and got reading. It’s a comedic little book about the perpetually wrong-place-wrong-time prone student turned schoolmaster Paul Pennyfeather and his misadventures among British high society.  It’s well written and the characters are enjoyably absurd. There’s an idiosyncratic Captian (who, of course, is not really a Captain), a pathological liar/mystery man named Philbrick, two horrible sisters (think Aunts Sponge and Spiker, but with less to do), an absurd lady, and Southern American prostitution.

The novel is witty, satiric, and a bit ridiculous. It was a quick, fun read, but I wasn’t too crazy about it. The thing with purely satiric works is that all the characters are built to be ridiculous, and are built for poking fun at. So I sort of drifted through this jaunt of a novel without anybody to care about. I was slightly more fond of certain figures than others, but not in a way that would bring me back to this book. It’s not a bad book—it’s just not really my jam. I’ll be interested to see whether or not I feel differently about any of Waugh’s other works.