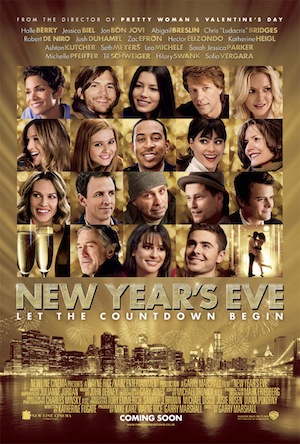 Garry Marshall was once my favourite director. I will admit this only with the accompanying information that I was about 12 at the time, a devotee of the Julia Roberts- Richard Gere oeuvre (Runaway Bride, Pretty Woman) and quite entranced by The Princess Diaries. He’s not an inspired director, but he makes sweet, enjoyable films, and that’s an undervalued quality in Hollywood these days. But in more recent years I’ve gotten more and more frustrated with Marshall. Maybe I’ve just gotten more cynical with age, or maybe his films really are getting worse, but while I appreciate the sugar and sentimentality style of his latest star ensemble projects,  I can’t help feeling that the Marshall I once loved wouldn’t settle for this little magic.

The formula Marshall’s using is smartly stolen from perhaps the most universally beloved romantic comedy in film history- Love, Actually. A big name-packed pastiche of theme-linked story threads about intertwined lives and their loves- it’s worked before, superbly, in the aforementioned British masterpiece, but in Valentine’s Day it was only sort of cute and in New Year’s Eve it’s downright tiresome. I’m the first person to love a silly, overly simple romantic comedy (see my perennially smirked-at love of Something Borrowed) but while Valentine’s Day at least hooked up semi-likable couples in predictable yet unrealistic ways, New Year’s Eve has none of the charm or sparks that even a bad romantic comedy can usually muster.

I can deal with oddball down-to-the-minute stories like the “oh, that’s who good ole Hector’s playing” appearance of go-to Elizondo’s day-saving electrician Kaminsky, and silly misdirects like Josh Duhamel and Hilary Swank’s story intersection. I really like sweet, timely surprises like Halle Berry’s could-have-induced-eye-rolling video chat with her soldier husband and I can even get behind couples meeting in elevators, once-a-year midnight meetups, typical coming-of-age through boy-kissing stories, apologetic rockstar proposals, sentimental dying dads, comic/sweet births and a nice youthful-free-spirit-inspires-downtrodden-adult-and-learns-compassion plot. And New Year’s Eve executes some of those with at least mild competency. But no matter what silly (or, in the case of some of the greats of the genre, inspired) story you’re following, a romantic comedy lives or dies by the chemistry of its stars and on that count New Year’s Eve is a dramatic failure.

The trapped-in-an-elevator pairing of Ashton Kutcher and Lea Michele seems to have been designed for maximum annoyance; they’re both so grossly over-exposed, but at this point her affected wail is so grating that I was thrilled whenever he spoke in her place. A Josh Duhamel-Sarah Jessica Parker coupling inspires confusion with just a dash of ick factor. Jon Bon Jovi is a charm-machine, and while his screen partner Katherine Heigl is known for her romantic comedy flair, the two bicker well and sizzle not at all. In fact, the only sizzle in their scenes is provided by the one-note but SUCH-A-GOOD-NOTE Sofia Vergara, who is predictably funny as Heigl’s sous chef. The RV-driving family in Duhamel’s story is sweet, and actually Duhamel’s a great romantic comedy actor for most of the film, until he meets up with the miscast Parker, who, for the majority of her story, is perfectly lovely as (welcome back!) Abigail Breslin’s exhausted mother; but her and Duhamel were just gross. I was disproportionately thrilled to see Zac Efron in a fun role (though the 22 year gap between him and his “sister” was a little ridiculous);  I think he’s always gotten a bad rap for the bad writing he endured in his early career, which he doesn’t necessarily deserve. And while his part in his story is cute (though a bit of a Walk to Remember ripoff at times), Michelle Pfeiffer’s character is such a drippy mess of a human that caring about her is next to impossible. Cameos from a Bueller-referencing Matthew Broderick, a charming Alyssa Milano, (WESLEY!) Carey Elwes and the always wonderful John Lithgow were greatly appreciated and Seacrest’s participation sold the premise like a good Jon Stewart cameo in a political film. I liked Halle Berry (which I usually don’t) and Seth Meyers (which I always do) and can confirm that, just in time for her to take our beloved JT off the market, I’m finally fond of Jessica Biel, who is pretty funny as half of the only convincing couple on screen (with Meyers- LOVE).

New Year’s Eve is decently paced, not altogether horrendously written (it could’ve been a lot worse) and sports a great soundtrack of poppy feel-good silliness. The most fun thing about it is attempting to piece it together, Sherlock your way through the evidence and determine which storylines will intersect where (I had Duhamel lowered down to Parker or Swank within minutes but refused to believe the truth until it was too late). It could have been a fairly decent, thoroughly enjoyable if forgettable break from the heaviness of Oscar movie season. It is entirely the casting director’s fault that it isn’t. Garry Marshall is the man who launched the careers of Julia Roberts and Anne Hathaway. As the unknown stars of his movies, those two mega-celebrities made magic on the screen with the sort of dazzle only an unknown can muster. Before he makes St. Patrick’s Day, I really want Marshall to remember what that was like.