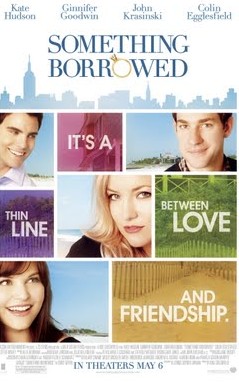 Playing with my Affections

Something Borrowed was a movie that I 75% loved. I loved it; I was ready to declare it my favourite rom com of the year. Ginnifer Goodwin, perhaps the most likable actress on the planet, plus my beloved John Krasinski and his wonderfully developed sense of irony- it was a winning combination. Even Kate Hudson was perfectly cast, and I never think Kate Hudson is perfectly cast.

For the sake of my love of that first 75%, we’re going to pretend the last 25% doesn’t exist for a little while, just while I work through my love and prepare myself for the worst. Bear with me, this is a totally rational approach. IT IS! Okay, shut up.

There’s more after the jump.

The film featured two male/female friendships that were gorgeous and honest and realistic in completely opposite ways (you’re right, that NEVER happens, that’s what I thought!) and the semi-toxic female friendship at the centre of the movie had a heartbreaking truth to it too. The whole things was smart, funny, sweet and incredibly affecting.

Even the film’s resident golden boy Dex (Colin Egglesfield) didn’t get the expected Hollywood treatment. He managed to not become a one-dimensional cartoon of a perfect man but also wasn’t made into a secret skeezeball in a nice sweater. He posessed all the charm, intelligence, good looks and decent guy-ness that usually earns the golden boy his title in real life, but still remained completely likable- crazy, I know, movies haven’t let the golden boys do that in more than a decade. If you didn’t buy that Rachel (and everyone else) loved this guy, you didn’t buy the movie, so Dex proved the sort of character worth balancing the premise on.

And the love story? Ending aside, it was what I think is the most common love story in the world- the one that never happens because both parties are chicken shit. I mean, something nicer… afraid of rejection? Rachel likes Dex, Dex likes Rachel, both of them wait for the other one to say something until she inevitably gets insecure and self-deprecating about it and pushes him towards another girl. Happens every day. But I’ve never seen a movie about it. Movies about the sort of people who stand on coffee carts declaring their love and run through airports to stop someone from leaving and fall in love suddenly at the dance when the plain girl puts on lipstick- I’ve seen those. Never met a person who’s lived one, but I’ve seen the movies. But this, this I’ve seen everywhere but the cineplex. It was heartbreaking and horrible and flat out stupid in all the ways that actual life can be. The love story had me on a string from the first scene.

Even the silly subplot about Ethan’s clingy ex resolved itself into a meaningful little tidbit of a story. Played by the beautiful Ashley Williams with pluck, enthusiasm and decent intelligence, there was no real reason for Ethan not to be into Claire. But he wasn’t. It was a credit to the random and uncontrollable fact of attraction and the lack thereof. In the narrative of the central characters, Claire’s aggressive advances made her crazy, desperate, a broad bit of humour in their overly-complicated lives. But her defeated declaration of “at least I tried” put Rachel and Dex’s story in more perspective than almost any other moment in the film.

The friendships had a similar ring of ugly honesty. All the selfishness and cowardice and idiotic power dynamics between Rachel and Darcy captured so much of what noone likes to say about most friendships. The truth is, life isn’t all Corey and Shawn, Anne and Diana. A lot of friendships, especially the ones that date back so far they started by convenience, aren’t actually that healthy. They’re fun, something the movie manages to show, but not all of them are good. That horrible reality and her inability to face it made up half of Rachel’s fascinating struggle. It wasn’t all about loving the wrong guy, part of it was about giving up the right guy for the friendship of the wrong girl.

The friendship between Rachel and Ethan, on the other hand, was the (still honest) antidote to all that. It was easy and loving and all those things that a really great friendship is. You know those people who know all your crap and who’ve seen your ugliest face and love you anyway because the world’s a little easier to take with someone at your side who sees it the way you do? That was her and Ethan (yes, I say “was”- I’m getting there). The most stunning scene in the film is a giant blowup fight on the beach when everything goes wrong and everyone screams and Dex and Darcy, the two people about whom Rachel is always the most concerned, storm off. Ethan confronts Rachel with the worst of how she’s been in the preceding weeks and she screams at him that he’s a jackass. Ethan’s reply sums up everything that is wrong with Rachel’s friendships, her lovelife and her view of herself: “maybe, but I’m the only jackass here who gives a shit about you”. With everyone embroiled in their own crap, Ethan was the only voice trying to pull his friend back from the deep end she’d swum into following after Darcy and Dex. He couldn’t care less about them, he just needed Rachel to remember to breathe for herself so he doesn’t have to go diving in after her.

Of course, from there (here we go!), the film screwed itself all up. The poignancy of that moment between Rachel and Ethan and all the things it said about what a friendship should be and the ramifications it had for her and Darcy, all that went out the window in an idiotic 2 minute scene in which Ethan confesses that he’s in love with Rachel. It never comes up before or after that 2 minute scene, but with the simple change from loving her to being “in love” with her, Ethan’s character lost all the unique wonderfullness he had for most of the film. He was a rare cinematic creature who was allowed to have friendships more complicated than his romantic entanglements, a guy who was allowed to love a girl fully without having to quantify it with romance or sex. It was new and different for the movies and oh-so-nice to see. Then the studio started giving notes. Or at least that’s what I’m assuming happened, because the last 1/4 of the movie seemed to have little to do with the promising 3/4 at the beginning. All of a sudden, Darcy is a cartoon villain, a philandering tyrant unworthy of love in any context. Well, I guess that solves Rachel’s problem, doesn’t it! Perhaps novelist Emily Giffin and screenwriter Jennie Snyder had written themselves into an overly complex corner and there was no way to find the happy ending their genre demanded without throwing Darcy under the bus. Maybe they just wanted Rachel to get her way. Maybe the studio needed it tied in a pretty little bow with a winner and a loser clearly on the sides of “right” and “wrong”. In any case, the end was too simple, the climax too dramatic, the lines too clearly drawn to fit with the earlier realism and complications of the characters I thought I knew after 90 minutes of the film.

It was kind of heartbreaking, actually, to be let down like that when I was so convinced I was watching something really great. Something Borrowed was not (is not, I suppose) a good movie. And you know how much it hurts me to say so.