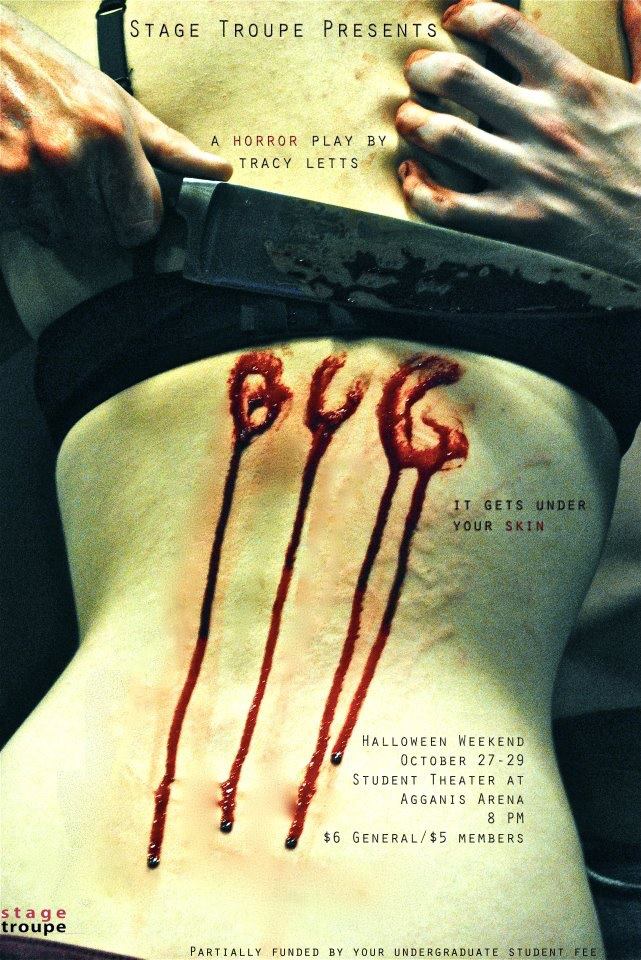 On a particularly stormy night, I ventured out to Boston University Stage Troupe’s production of Bug by Tracy Letts, directed by veteran Chris Hamilton, hoping for a night of horror and suspense.

Unfortunately, I was less than smitten with the results. Billed as “the play that gets under your skin,” I was not moved by the production or many of the performances in it. Thankfully, some secondary characters were compelling and spot-on, but too few, too late.

The horror was in the production team. From the sound design to set design, each piece was unified but off-point for the play. The sound was loud; tip: subtlety and silence are unnerving. The music, while appropriate to the themes of the play, didn’t fit with the concept of creating a horror story. I was greatly annoyed when music and fighter noise played during one of Peter’s speeches. As I will say below, Dan Stevens (Peter) can deliver a speech in an interesting and compelling way. Just let him speak!

While I may not agree with the horror story production concept for Bug, I appreciated Hamilton’s innovative approach to the script. I didn’t feel like the production elements fit and worked towards this concept. The motel room set was appropriate, but it didn’t feel unnerving, nor did it really create the perfect impression of a motel room with its standard sheets, nightstands, or lamps. The bed was also one of the biggest flaws in the production. I sat in the third row and I could only see one person at a time when both Agnes and Peter sat on the bed. Perhaps turning the bed or placing the characters further upstage or even putting the bed on another level could’ve solved this problem.

The lighting and costume designs were probably the best executed, but they still did little for me to move the production forward. The lighting intensity was often dim, a great effect for the suspense and ambiance, but I had trouble seeing many of the characters during these dully-lit scenes. The costumes were good, but nothing remarkable; they set the scene perfectly, but what girl wears matching bra and underwear? The first night between Peter and Agnes felt too much like a striptease. Otherwise, the costumes depicted character and personality, but lacked a clear concept other than “dirty”.

The blood and gore team was excellent, but I would expect nothing less for this play. I was consistently impressed with the cast’s skill in applying the blood, especially during fight scenes. The scars were also top-notch because they seemed to ooze fresh. My only concern was Peter’s dried blood. Blood does not always dry dark red and I would have appreciated more imagination in using the gore to really surprise and frighten the audience. Overall though, this team was excellent in its execution, far out-shining the other production aspects.

This production featured an interesting twist at the beginning: the ushers were employees at the motel. I tried to talk with one female usher, but she was virtually non-responsive. It was a creative idea that seemed to wane in execution. The opening of the show was rough; the pacing seemed to be slow and awkward in the first scene.

Honestly, I foolishly thought Allie Romano (R.C.) was forgettable in the first scene. Her character bumbled about in an awkward way and did not feel as grounded in the action or motivation as I would have liked. Luckily, Romano delivered in Act 2 and she quickly became one of my favorite actors in the show. While I didn’t think she used many different tactics, the tactics she used were well-executed and strong choices. Nazvad Dabu (Jerry Goss) was also particularly good as the abusive, but interestingly considerate ex-lover of Agnes White. Dabu’s thin frame helped make him alarmingly frightening, but almost endearing when he took an interest in Agnes’s deteriorating condition. Bravo for changing my perception of the character and using “against type” casting to your advantage. I didn’t understand the Doctor’s role in this production of the show; she almost felt like a “bad guy” put into the scene late in the show to add a needless amount of conflict. I think there is enough conflict among the characters without adding Lindsay Kopit’s (Dr. Sweet) maniacal smile to the mix.

As previously mentioned, Stevens delivers in his monologues; he is compelling, interesting, and motivated in his delivery. I couldn’t take my eyes off him when he spoke. Unfortunately, there was something off about his relationship with Ali Irwin (Agnes White). Irwin was particularly frightening when she began to get into the hysteria of the conspiracy, but for other scenes, she lacked motivation. I didn’t get that either Irwin or Stevens wanted or needed something from their scene partner. With the exception of the particularly engrossing ending, I didn’t really believe either of them. Their physicality was spot-on, though, especially Stevens’ twitching.

As a final note, any time there is fighting onstage, please get a fight choreographer. I know too many directors and actors are comfortable with orchestrating their own stage fights, but I can tell when a company brings in someone with an objective eye for stage-fighting. Additionally, while I found the accents good, I worried that they were impeding the actors from accessing the full range of their voices.

The show presented an entertaining night of theatre, but I think it missed the concept and point in places. There were unexpected laughs from the audience in the most serious scenes, confusion during stage-fights, and awkward relationships among the characters. But the ending was stunning and, as usual, worth the time sitting through the previous scenes.