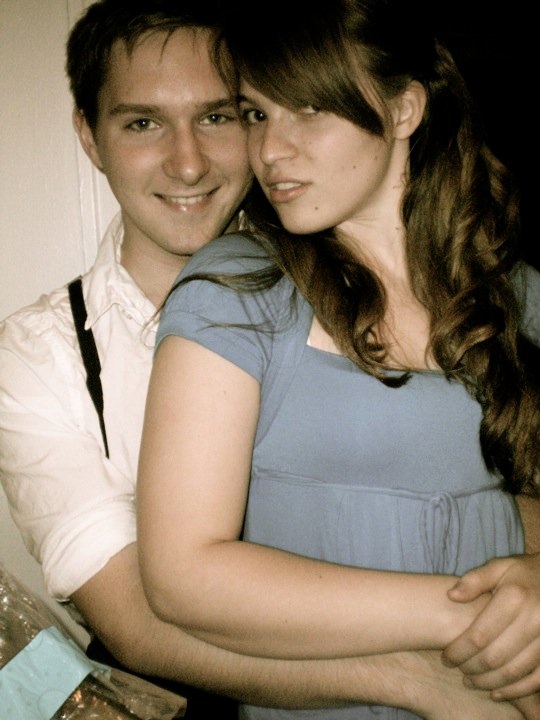 My Theatre Nominees- Q&A with Agatha Babbitt and Chris Hamilton

Before we announce the winners of the 2010 My Theatre Awards, we’re proud to present the My Theatre Nominee Interview Series.
.
One of the best student productions of 2010 was BU Stage Troupe’s Rabbit Hole. The remarkably mature and thoughtful production is nominated for 4 My Theatre Awards in the student division including Best Actor (Dan Stevens), Best Actress (Madeleine DiBiasi) and Best Production. The Best Director nominees Chris Hamilton and Agatha Babbitt took some time out to talk about their collaboration.
.
Read on for Agatha and Chris’ thoughts
.

Chris: I had actually already directed before, so I was already drawn, so to say. I really enjoy acting and producing, but I love the experience of finding a play and envisioning it on stage, and then actually bringing that vision to fruition. To me, there is nothing more satisfying or gratifying.

Was Rabbit Hole your first production together?

Yes it was. I think the biggest regret for both of us is that we didn’t have more time to work together.

What is it about the partnership that makes it work?

We complement each other really well. We were always there for each other as a support system, and we constantly pushed each other to do better and be the best directors we could be. We both understood that our main job was to assist the actors to attain their potential without taking full control of all of the artistic decisions.

If you could direct any play ever written, what would it be and how would you approach it?
Agatha: Two plays come to mind, and they couldn’t be more different. I’ve always wanted to direct Oscar Wilde’s The Importance of Being Earnest; in my mind, it is the wittiest, laugh-out-loud comedy of manners ever written. I would love to try to make it accessible to a modern audience. Another goal of mine has been to direct a production of Huis-Clos (a French one-act drama). It’s an astounding piece of work, but unfortunately, lost a lot in translation. A pipe-dream of mine is to re-translate and direct it.

Chris: I actually already had the opportunity to direct the first half of my favorite play, Tony Kushner’s Angels in America, last year. It was a phenomenal experience to work with such powerful and inspired dialogue. My other favorite play is Tracy Letts’ August: Osage County. I would love the opportunity to direct it; it has one of the finest dinner scenes ever written for the stage.

Do you try and go to the theatre often? Is it helpful to view the work of other directors? If so, what have been some of your favourite productions?

We go to the theater constantly. Our favorite productions include Lestat the Musical, Women on the Verge of a Nervous Breakdown, Liza With a Z, and Death of a Callgirl starring Paris Hilton.

In your review, you drew attention to our director’s note, and we believe that truly sums up what we feel about the production. We were both drawn to the unsentimental, real quality of the script and its daring, de-romanticized take on tragic themes.

There were plenty of great auditions for the show, but our job was made really easy because there were 5 auditioners that truly wowed us, and all 5 of them ended up in our cast. In each actor, we saw an honesty in each portrayal that really fit their respective characters.

The rehearsal process was relatively laid back, three or so rehearsals a week. We had 9 weeks to work on the show. In rehearsal, we gave the actors a lot of room to make their own discoveries, and then helped shape these performances to fit the ensemble of the show.

The characters in Rabbit Hole have gone through so much that students can’t even fathom, how did you get your actors to relate?

It was definitely a struggle at first, because we as students are not only divorced from the mundanity of work and housekeeping that the characters endure throughout the show, but also completely unaware of the tragedy of the situation. For instance, there is a moment in the end of the first act when Howie (played by Vishaal [Reddy]), believes that Becca has intentionally deleted a home video of their son. He then lashes out at Becca out of grief and anger; Vishaal understandably had trouble relating to this moment at first. In order for him to connect to the emotion of the scene, we guided him to attach a personal insecurity to the moment; we had Maddie [DiBiasi] (who played Becca) constantly repeat a certain phrase which he said would most hurt him until he finally broke down and reached an outburst of raw fury and pain. It was a revelatory moment for everyone there, and it helped Vishaal reshape his character for the whole production.

Like you mentioned, it was difficult for the actors at first to step into these older characters, who are far more lived-in than any of us could even fathom at our age. One of our constant notes was to be conscious of the ages of the characters, as they would sometimes have a tendency to play their characters younger than they are written in the script. It was also difficult for us as directors to understand the depth of the pain of the characters in our show. The hardest thing in our recent lives was figuring out how to manage our college payments; losing a son or daughter is entirely alien to us. Nevertheless, we were both validated in our work by the astounding response from parents who came to view the show. Both of our mothers were extremely moved by the play.

What are some of the things you brought to the play that were unique to your production?

We wanted to keep Danny a constant presence in our play; even though he is never on stage, he is always central to the plot and emotions of every character. We physicalized that through a light that is constantly on in Danny’s room; even when there was no action in the room, it served as a reminder of his impact on the characters. Becca turns off the lamp as an act of closure towards the end of the play.

Have you seen the recent film version? (Nicole Kidman’s up for an Oscar for it). What did you think of it?

Hmm. Yes, we have both seen the movie, and as to be expected from people who are so invested in the source material, we had very mixed reactions to the film. Even though David Lindsay-Abaire, the playwright, also adapted the movie script, the tone definitely shifted in the transition from stage to screen. We were disappointed by the loss of a lot of the humor of the script; in our beliefs, it is a vital part of the catharsis of the show. The movie seemed heavy and overbearing in comparison to the play. Neither of us were blown away by Nicole Kidman’s performance, but there were definitely redeeming factors to the film, especially Miles Teller’s performance as Jason.

Sadly, neither of us are directing this semester. We missed performing, so we are both in Stage Troupe’s production of Amadeus. Agatha is playing the lead role of Constanze, and Chris is playing the smaller, yet no-less-glamorous role of Valet/Priest. The performances are April 13-15 in the Student Theater!