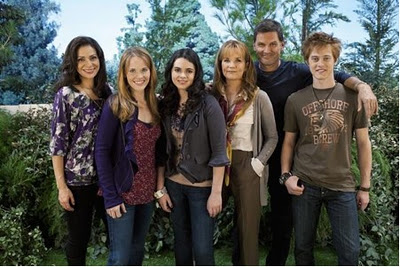 Switched at Birth: Season One

I once touted the virtues of the Hulu-enabled series catch-up on this very website, but today, in view of Netflix’s dismal stock showings, I’m here to throw the company a bone.

Netflix remains a great way to stumble upon TV shows you never would have considered during their regular schedule.

And so it was that one bored evening, when the World Series-delayed regular programming continued its absence from my TV screen, I decided to click on a random ABC Family drama Switched At Birth. Now apparently this show had stellar (for ABC Family) ratings, but I hadn’t really heard of it. But never shy to indulge in TV shows about people almost ten years my junior, I started watching.

And it was great. The show follows Bay and Daphne, who were improbably switched at birth. They discover the mix up and the two families decide that the best thing for the girls is for them all to live semi-together on Bay’s non-biological parents’ (The Kennishes) huge property.

That probably sounds like enough drama to power the first season of nearly any TV show, but Switched At Birth has created characters that sort of dial the drama up past 11.

First is the most obvious one: Daphne is deaf, having lost her hearing at age 3 due to meningitis. The show isn’t shy to explore stereotypes people have about deaf people, which is pretty much to be expected in any after school special that aims to teach us why you shouldn’t make fun of the kid making weird signs with his hands. What’s way more intriguing about Switched At Birth is its use of, and seemingly in-depth understanding of, deaf culture. Daphne goes to a deaf school, doesn’t want a cochlear implant, and has deep connections with a family that is seriously into the “Deaf Pride” movement. At one point, a serious argument is made as to whether deaf and hearing people can ever really understand one another, and there aren’t any easy answers here. Most of the characters (the main characters at least; side and background characters often seem cartoonishly cruel towards the deaf characters in ways that don’t ring true for a show with such great characterization) are trying their best to understand one another, but they often fail.

And while Daphne started off as an overly saintly deaf girl, she has quickly grown into a complex, frustrated, ambitious young woman. Bay, in contrast, started off as an annoying spoiled brat, but has slowly morphed into a sprightly, angry woman trying to figure out where her place in all of this is. They have deftly created two leads who are both compelling and surprisingly realistic.

The second guaranteed drama creator here is the class issues. Daphne and her single mother, Regina, grew up on the wrong side of the tracks and view ostentatious wealth (like The Kennishes’) with a healthy mixture of distrust and annoyance. The Kennishes, in contrast, view their wealth as their privilege and their way to help the world, and they often feel threatened by the lower class flavor offered by Regina. Add to that Bay’s sort of fascinating relationship with her own privilege (Both in hearing and in being raised so wealthy) and Daphne’s surprise, excitement and weariness at her new status as daughter of a famous baseball star, and you’ve got a surprisingly nuanced portrayal of wealth.

Occasionally, though, the show falls too hard onto the crutch of stereotypes. Especially in the early episodes, the wealthy people seemed almost uniformly shallow and controlling, whereas Regina remained dedicated to her daughter. The legitimate fear of crime in Daphne and Regina’s old neighborhood was supposed to be seen as yet another example of the Kennishes being prejudiced, when actually it was a pretty scary place with bars on the windows. And the suburbs aren’t entirely devoid of humanity, even if they are occasionally over-spray tanned.

By the end of the show’s first season, though, the characters had started to become so well fleshed out that we could forgive the show its occasional dives into movie-of-the-week simplicity. The only last problem to me is the show’s absolute reliance on “dating as a divider.” At the end of Season One, with as few spoilers as possible, there’s already a pretty huge built-in drama creator in the mix that flows organically out of the characters and the situation. It’s huge and has far-reaching implications, and was also legitimate an intriguing development. The same cannot be said for the show going back to the old “the girls like the same boy” well. It’s just not necessary in a show this good, and at the very least should have been employed more subtly.

Overall, though, Switched At Birth is a damn good show. It’s like 7th Heaven meets Gilmore Girls, with the slightest element of Veronica Mars’ over-the-top class drama. And that’s about the highest compliment I can pay it.

*Season One of Switched at Birth is available on Netflix Instant Streaming.