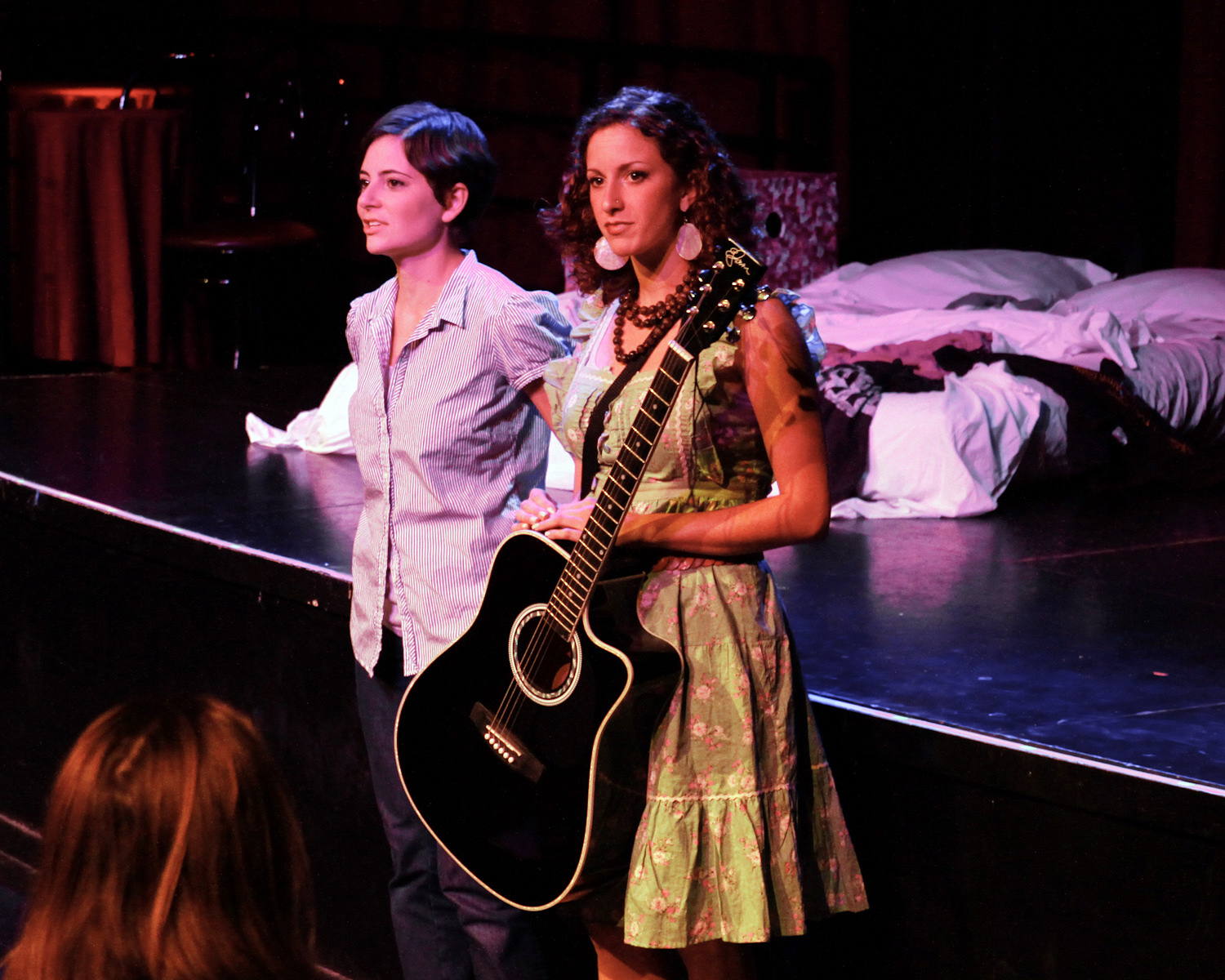 I think it’s delightful when I can just enjoy theatre; it doesn’t happen often that I can sit back with a glass of Pinot Grigio and appreciate a play like a good sitcom. Sugar Cereal Productions’ launch and world-premiere of Girl Hopping was such a night.

Housed in the infamous Club Oberon, Girl Hopping is a sweet, tarty look into the lives of six women. Six lesbian women. Really, the stories would have been the same if you inserted a couple of men, but I’ll talk more about how the energy is just right with this particular cast of actresses and characters. These women all live in West Hollywood, California, and they all sleep with each other. Or they want to sleep with each other. Or they have slept with each other. But as light and enjoyable as the evening proved, playwright Ilene A. Fischer left the mundane and saccharine to actual sitcoms, instead filling Girl Hopping with charm and bite, a devilish mix for this hot cast of women.

Led by skillful director Mark Sickler, Girl Hopping charts the course of Sam, played with spunky fortitude by Cassandra Meyer, a tampon commercial actress (no, the jokes never get old), as she explores the Southern California dating scene. While the play explores what it means to be a lesbian, the show also recognizes the universality in seeking a significant other and the relationships we form along the way.

Sickler does a phenomenal job of negotiating these relationships among his talented cast. The standouts in the cast are Gillian Mackay-Smith as Caitlin, a woman who never seems satisfied with her life, and Shana Dirik as Marlene, best friend to Sam and a lesbian who relishes an open relationship with her younger partner. Both Mackay-Smith and Dirik do an outstanding job of developing chemistry and character-appropriate relationships with every member of the cast. These women don’t just create characters, they create their characters’ entire worlds.

One of my favorite acting and directing elements of the show is the way each actress makes the play her story. Though I could debate who Fischer intended to be the lead, these actresses each make their specific character’s thoughts, feelings, and motivations matter to the audience. Each character’s pursuit of happiness takes center stage and creates a compelling evening of theatre. Additionally, I loved Sickler’s closing of each scene. The director places a crucial defining moment just before the black-out in each scene. Sickler and his cast’s imagination astonished me, from the paper airplane to the clinking of beer bottles; these moments are spot-on brilliant.

I also loved the costume design by Maureen Festa, but I expected nothing less than character-appropriate and flattering from the three-time DASH award nominee. Honestly, I was shocked at how well Festa developed a full closet of costume changes for these six women, each costume fitting perfectly and including accessories. These lesbians know how to dress well. I also liked the videography by Neil Mass and Jason Fenton. While not anything novel for Oberon’s stage, they do a fantastic job of setting each scene with minimal set, especially helpful when returning to the same location.

I was hesitant to see a play about a demographic about which I know relatively little. I was expecting to feel lost and ignorant, not to mention bored. I needn’t have worried. Sickler and his cast create a world with types of people, but not stereotypes. These women are fully-developed characters with back-stories and motivations. Each actress knows who her character is and what her character wants- especially helpful in developing the integral chemistry. With the exception of some hot make-outs and some hilariously funny jokes about lesbians, the relationships are real enough to exist without gender. These characters truly love each other and themselves, and they struggle to achieve happiness throughout the play. That said, the first scene in Caitlin’s apartment does seem a bit gratuitous to me; I was expecting more from the couple’s first night together or at least something more compelling to make me think they belonged together.

Luckily, Mackay-Smith and Meyer had such dynamic chemistry in the previous scene that I quickly remembered why I was secretly rooting for this unlikely pairing. Elise Weiner Wulff’s Courtney never quite hits her mark as one of the play’s more foppish characters; she is deliciously funny as she stumbles through the lesbian dating scene, but she never delivers a really sincere moment to make me think there’s something more to her desire for happiness. She comes so close at the start of Act II that I wondered whether it was the actress or the script that was holding Courtney back. Equally confusing is Shannon Roberts as Donna. She zings with one-liners that make fun of her character more than others, yet I had trouble thinking she was truly “wrong” for anyone. Maybe that is a compliment to the actress, but not the character.

Girl Hopping is a pleasure to enjoy and Sickler and his cast make the play move at a wonderful pace, especially in the chill atmosphere of Club Oberon. I heard a line before the show that was particularly appropriate: “Real lesbians make their own luck.” This production doesn’t need luck; their hard-working and talented cast and crew have made their luck for them.