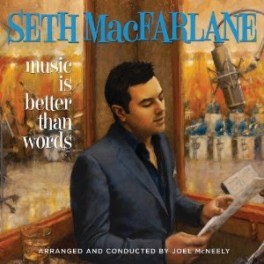 Obsession of the Week: Seth MacFarlane

If given the chance to meet just one celebrity in my life, it wouldn’t take long for me to come up with a remarkably short list of whom I would choose. Very near the top of that list would be the endearing and multi-talented Seth MacFarlane.
If you watch an interview with the Family Guy/American Dad/Cleveland Show creator/showrunner (preferably his superb episode of The Kevin Pollak Chat Show), his easy charm, quick wit and everyman humility are so irrefutably endearing that it’s hard not to fall in love with him.
Now the highest-paid showrunner in TV history, MacFarlane began his career as an animator who got his start working at the classics-factory cartoon house Hanna-Barbera.

The wunderkind producer also quickly proved a talented writer and on the merits of his scriptwriting sold Family Guy to Fox, becoming a major network showrunner when he was only 24 years old. There’s also the fact that he plays the piano, sings, is a self-professed geek, and that he has a fantastically old-fashioned approach to life mixed with leftist modern ideals- for every reason in the world I’ve long been hopelessly smitten with Seth MacFarlane.

Then, of course, when the multi-talented magnate signs a deal to put out an album, he pulls directly at my heartstrings by making it an album of lesser-known jazz standards and including the occasional nod to old school musical theatre (with the Gigi classic “The Night They Invented Champagne” and The Sound of Music‘s best tune, “Something Good”).

MacFarlane’s just-released Music is Better Than Words essentially amounts to an ode to a better time in music history- when smooth and strong voices sang unaltered alongside full orchestras. That’s what this album is. Recorded on Frank Sinatra’s famous microphone and filled with joyful new arrangements by producer Joel McNeely, Music is Better Than Words pays fantastic tribute to the authenticity of the 1950s musical era (many of the tracks were even recorded in one unedited take). MacFarlane’s voice sounds as richly beautiful as ever (audiences know it well from his character Brian’s many musical adventures on Family Guy) as he wanders joyfully and seemingly effortlessly through uptempo swing arrangements like “The Sadder but Wiser Girl” and slow, sweet ballads like “Anytime, Anywhere”. And as he takes on my old favourite “You’re the Cream in My Coffee”, I marvel at where this album has been all my life.

There are celebrities who captivate the imagination, convincing you that they are truly wonderful and fun human beings. Then there are intelligent and genuinely funny writers. There are people with excellent taste and interesting interests. There are gifted voice performers, good animators and those in possession of a truly memorable singing voice. My cynical brain is insistent that such positive qualities have to be mutually exclusive. But then there’s Seth MacFarlane…