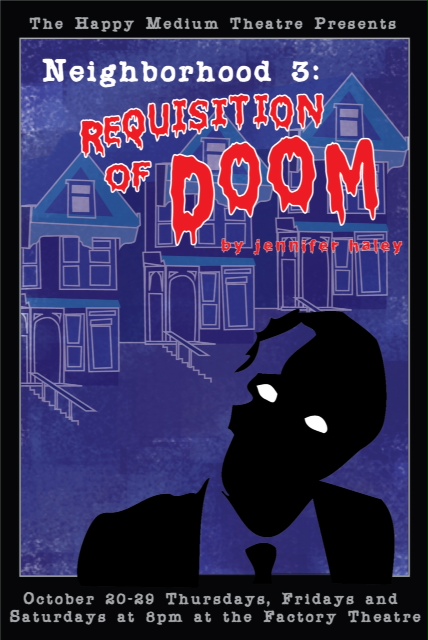 Horror-pop Halloween: Zombies, An Evil Videogame, and A Sinister Suburb

Happy Medium Theatre’s production of Neighborhood 3: Requisition of Doom by Jennifer Haley is often funny, endearing in a nerdy (and sometimes intensely angsty teenage way), and engrossing. The basic story is that in the creepy/Stepfordian suburb of an unnamed town, all the teenagers have become totally engrossed with a videogame that uses satellite photos of the players’ neighborhood and zombifies its inhabitants. But the game isn’t just a game, and the consequences of in-game action start appearing in the real world—so what happens at the final level? It’s an enjoyable night of theatre, especially if you like the scary side of Halloween and/or gaming.

When I walked into The Factory Theatre I saw a paint splattered stage and acting blocks, bloodied picket-fence posts covered in numbered post-its and various suburban-life props (golf club, hedge clippers, etc), and was greeted by a wave of midi music. Now, I’m not a gamer myself—I know, I know, WHERE IS THE DORK CRED? Sorry, it’s out sick today—so I definitely missed the references in the music, but I heard a neighbor whisper, “Whoa. Old school Mario.” I’ll trust her. In any case, the empty playing space and the music pulled me in. I was also greeted by The Walk Through—a silver-gilded, wire-wrapped entity that announced levels and helped orchestrate the scene transitions.

The play began by having The Walk Through (Barbara Digirolamo), and a trio of clown-ballerinas (Kendall Aiguier, Elizabeth Battey, and Lauren Elias) display the “avatars”/characters. Framed by the ballerina’s arms, the characters walked on-stage, revolved, and then walked through the audience single file. It was a good simulation of the avatar selection menu. And even in this walk-through introduction, the entire acting company did a great job of making very specific physical choices about their characters—I could instantly tell who was a mom, who was a teenage kid, who was an overachiever, etc just by how they held themselves. They used that physical specificity throughout the entire play. Well done.

Then the leader ballerina (on pointe. Ouch. And bravo, Kendall Aiguier) did an increasingly frantic routine to a metal song, eventually getting pushed back and forth between the other two ballerinas.

From then on, the play unfolded as a series of scenes, presented as “levels.” Especially toward the beginning, much of the dialogue felt like clunky exposition time, although Melissa DeJesus (as Makaela) and Nick Miller (as Trevor) did a great job of pulling charm and humor out of the awkward first scene.

That note can be extended to the whole cast- they were able to be funny with broadly written, sometimes stereotypical characters, and find some charm or likability even with over-whiny and often insensitive teens.

As the scenes progressed, the pace in the writing picked up, and I felt less adrift as the number of tangents about things like garden gnomes and the comforting logic of their ceramic-face temperatures decreased. Yeah. Ms. Haley, I’m docking those points from you. But as the play continued to unfold, the action became swifter and swifter, and as people started to get eliminated, the show became totally engrossing.

Throughout the show, the lighting, set design, costuming on the “avatars,” and the majority of the sound design created an appropriately malleable—yet specifically suburban—world in the playing space. The lighting especially gave us color and depth and didn’t let us see exactly the violent, gory moments we shouldn’t (but couldn’t help looking for). The only tech element that I found jarring was the use of both live and recorded sound for The Walk Through. I accepted the recorded and altered sound as part of the videogame sphere, but felt jolted out of it with the use of live voice. The costuming for The Walk Through and the ballerinas was just distracting and broad—I wonder if it would have helped me accept the ballerinas as a functional part of the story if they had zombie make-up. Made up as dark scary clowns, I found them totally extraneous, and they felt alien to the rest of the production.

By the end of the show, while I was watching Joy (Audrey Lynn Sylvia) threaten her son, Blake aka Zombiekllr14 with a hammer, I was totally sucked in. It sneaks up on you. It’s not a perfect show—it’s definitely not a perfect script—but it’s a fun production for an easy night of entertainment.

Neighborhood 3: Requisition of Doom is playing at The Factory Theatre in Boston, MA until October 29th.