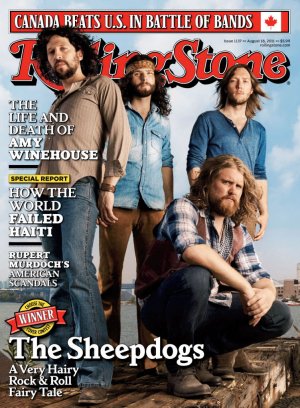 Designing the Music- a joint article with My Music

*The following is a joint article with My Music. Go check out the original posting on our newest branch*

Last week Project Runway played host to Saskatchewan- based rock band The Sheepdogs. The winners of Rolling Stone’s “Choose the Cover” competition, the guys became the first unsigned band to grace the cover of the famous magazine. They’ve since been signed by Atlantic and raking in awards along with appearing in the Project Runway tie-in Garnier ads in Marie Claire and Rolling Stone.

The episode, entitled “Image is Everything”* asked the eight remaining designers to come up with a new look for one band member- 2 looks per musician. The results were an underwhelming spattering of 60s worship and bad tailoring (and a win for Viktor and his pleather fringe jacket). Along the way I got to see The Sheepdogs interact for the first time and came to really like them.

Poor lead singer Ewan Currie took quite the beating but showed tremendous patience when struck with the misfortune of having his looks designed by crazy old man Bert and world’s-worst-person Olivier. Bert tried, he really did, and his look wasn’t terrible- but he put the rocker in purple and pigtails, and Ewan never said a word. Then there was Olivier (thankfully the eliminee of the episode- Finally!) the supposed menswear designer kept the affable singer sitting around in his underwear for an hour after calling him fat (which he Absolutely Is Not) multiple times, arguing with him, ignoring his every request and generally being a massive, awkward douchebag. Again with the easy-going Canadian positivity- Ewan just laughed right through it (and maybe swore a little, off camera- but I’m just guessing).

Guitarist Leot Hanson also made a great impression with quirky moments of describing his lifelong dream of owning red jeans and warning his designer that he has a mighty bush of chest hair. With by far the least screentime, bassist Ryan Gullen seemed pretty cool as well. He got the least screen time because his passable/interesting fashion sense going in struck the fancy of some of the more reliable designers who then didn’t generate enough drama to make their story worth telling. Ryan did, however, get Heidi Klum to describe him as the hottest band member multiple times. It’s a bassist thing Heidi, just go with it.

But the cutest was Sam Corbett, the quiet but charming drummer whose great mistake was describing a bit of an out-there style that was jumped on by the two designers with the least experience in tailoring menswear. The result was the least rock and roll-looking band member being dressed in a series of brown tunics that looked like they were designed for Pocahontas and a seniors bowling league respectively. It was awful, but he was so nice about standing up for his designers even though they knew they screwed up.

There’s nothing like seeing the real guys behind the music to make you love a band. And now, because of Project Runway of all things, I’m officially a Sheepdogs fan. Because these guys are honestly kinda great. And the three songs they performed on the show aren’t half bad either- standard pop-skewed indie rock that my relatively mainstream music taste latched right on to.

*In related news, Adam Lambert served as the (thoughtful and informed) guest judge. He’s a classic example of someone I like more than I like his music (the most prominent example of that phenomenon is Justin Timberlake). Actually, it’s not that I don’t like Adam’s music, his voice is sensational and his writers desperately need to step it up to show off what he can do instead of giving him generic dance mixes and squealing high notes. It’s his image I really don’t like. The super glam Adam is a lot of fun once in awhile, so on Idol when he trotted the high production values out for his performances I was all for it because then he had to stand and take criticism from the judges and endure idiotic interviews with Ryan. We got to see him palling around at the house with the other contestants, developing a secret crush and adorable friendship with his competition Kris Allen, and being awesomely socially awkward. Now, with much more controlled exposure, I never see Glambert without full makeup and theatrical presentation. The theatricality is fun sometimes, but what I liked about Adam Lambert was the Adam part, not the trappings and now I really kind of miss him.