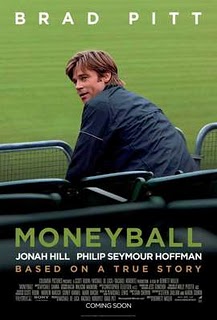 I knew I would like Moneyball. I was hoping it wouldn’t suck but I was fairly certain I’d love it either way.

The following are the reasons:

– My idol of all idols Aaron Sorkin worked on the script, even if it was rewritten for a third time before finally going into long-delayed production, and I’ve never not loved anything he’s ever touched (yes, even Studio 60).

– I like Brad Pitt more than your average Joe, I suppose, and I can even get behind the unconventional casting of Jonah Hill.

– Chris Pratt as an unlikely hero baseball player? Has someone been reading my dream journal?

– I like a good true story. There’s just something really great about life and its inherent cinematic quality.

but, most telling of all,

So I was pretty sure they could completely screw up Moneyball and I’d still be all in.
But hey, they didn’t screw it up.

On the contrary, Moneyball is a well-told adaptation of a hard-to-adapt book about an extraordinary man and the power of doing things differently. From the stellar sound editing to the clever script and well-paced direction to Pratt’s inspiring supporting turn to Pitt’s best leading man role possibly ever to the fact that I might have to start actually liking Jonah Hill- everything about Moneyball is pretty great, actually.

Sports movies almost never get the recognition they deserve, but the inspiring and extremely well-told story of Billy Beane and his Oakland A’s deserves all the recognition in the world. It had me on the edge of my seat and changing the way I think about my favourite game.

That’s how you tell a great story.