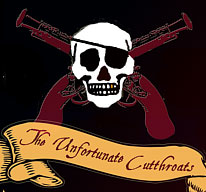 Vagabond Theatre Group was very ambitious in their staging of The Unfortunate Cutthroats, an original play written by Zach Winston and directed by James Peter Sotis. The Unfortunate Cutthroats portrays life at sea for what else but cutthroat pirates. The production bobs like a boat out at sea and staggers under the weight of an unfortunately long script, but shines with some able actors and a strong director.

The show opened with perhaps its most compelling scene: Marcus, a young pirate played by Peter Murphy, examines a tied-up Claude Amos, played with particular skill by an unmoving David Max Gibbons. Unfortunately, the production went off-course from there.

I did, however, like the actors’ consistency with their accents. Dialects can be a difficult challenge to maneuver in any production and, though each actor had a slightly different accent, I bought into the idea that they each came to the ship from a different geographic location, so it worked.

This consistency quickly sank (let’s see how many bad sailing puns I can add to this review) as the actors had difficulty committing to a particular style of acting. Murphy clearly played the “wide-eyed farce” and he played it particularly well. Though in the beginning of the show I was a little shocked by his ferocity and commitment to this style, I quickly appreciated Murphy’s keen sense of comic timing. Unfortunately, not all of the actors made the same commitment. Most notably, Boyle and Everett, played by Christian Sterling Hegg and Alexander Joseph respectively, lacked the same farcical elements in their acting, despite a script that begged for it. In fact, the only other character who came close to matching Murphy in style was Flynn, played by the playwright Zach Winston. But his execution wasn’t nearly as effective, the result being a one-note, blubbering performance that made me want to make him walk the plank (too cheesy or too harsh?).

Despite the inconsistency in style, several other actors shone like beacons on the dark sea of the painfully long voyage of the performance (okay, I am done with the horrible allusions to ships). Most notably, I loved Sadie, played with a perfect combination of coarseness and sweetness by Jenna Forristall. My only complaint would be Forristall’s ambiguous relationship with Murphy; were they supposed to be the romantic leads or were they merely a brother-sister pairing? I’ll blame unclear writing more than the acting or directing decisions on this one. Regardless, Forristall delivered an especially fine performance with Murphy- every scene sparkling with energy (an especially hard feat aboard such a dead ship). Sadie’s father, Edward “the Lefty” Drake, made a dynamic entrance but the actor, Greg Davis, quickly sank under the weight of unclear writing and too much hidden exposition. I was never clear on who Drake was or what he wanted in his scenes, especially with Sam (played with admirable charm and versatility by Andrew T. Mattox II). Mattox, for his part, was especially hilarious in a surprising third act entrance, one of the few really good decisions in Winston’s writing.

James Peter Sotis deserves the highest praise of the evening, however, as the captain of this doomed ship (all right, I did not give up on the pirate references). Sotis’ direction saved the three and a half hour production from utter boredom. His use of an alleyway stage configuration encouraged audience laughter that generated energy and confidence in the actors. He also kept the play moving forward by encouraging the actors to commit to their time onstage; many strong moments were accomplished when the actors were silent but committed to their characters in the background.

Despite the efforts of some fine on and off-stage talent, the play still struggled under a weighty script about pirates, masculinity, loyalty and friendship. I can’t even list all the themes Winston attempted to tackle in a single play, resulting in a convoluted and over-extended script. Many of the jokes fell flat even with the most accomplished actor committing to their lines. What is the purpose of a retching pirate, especially for an extended period á la Family Guy’s situational humor? I was never certain where the show was moving. Often I was lulled into a ten-minute two-person scene that stalled any previous momentum of the play’s rising action. Winston’s script is verbose and self-aware, full of tangents and lose ends that hinder the actors in completely realizing their characters. My favorites actors were either prematurely/insensibly killed off or reduced to playing caricatures lacking any background or motivation to accomplish anything of importance in three and a half long hours.

This may be my most scathing review to date, but I really do anticipate wonderful performances from Vagabond Theatre Group in the future, especially if they feature such a strong cast (Murphy, Mattox, and Forristall in particular). Sotis knows how to cast, develop and execute a show brilliantly, despite a script with more holes than Captain Lefty’s wooden leg. Keep an eye out for future readings, workshops, improv nights and plays. But please, if there are any more three and a half hour productions, I want to be shot in the first ten minutes, like Claude Amos. Lucky pirate!