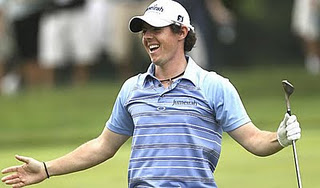 In honour of Rory McIlroy‘s history-making, record-setting, critic-silencing, storybook fodder comeback performance at Sunday’s US Open, we’re naming him My Sports Stadium’s first ever “Sports Superstar of the Week”. Sure he’s only in his early twenties, a gracious player and consistently in contention (and now a winner) at the majors, but so are a few other up and comers in the current golf landscape (23-year-old Jason Day has placed 2nd in the last 2 majors). There’s something that sets Rory apart, something that makes him just a little more superstar-y than the others. It’s not his brilliant swing, consistent putting or steadfast determination; it’s not the way he seems to love the game, his confident approach or his mature ease with the press- it’s not as calculable as that. But you just know even the non-golf lovers of the world are gonna know this kid’s name; and that’s something golf hasn’t seen since a fateful Masters Tournament in 1997.