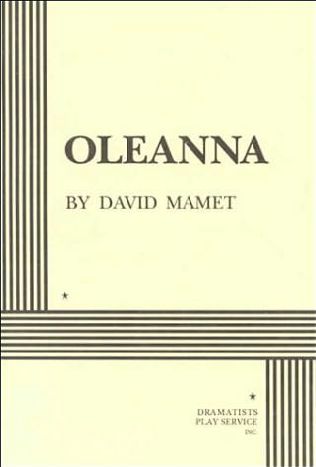 I love new theatre companies, their first productions always pulse with a brilliant first-time energy. Can’t Wait Productions’ Oleanna by David Mamet opened with this same raw verve. Upon arriving at the First Church Somerville venue, the audience was ushered not into a proper theatre but into a small office with the name John displayed charmingly on the door, as though we were intruding right onto the character’s territory. Though the audience was seated uncomfortably on cramped folding chairs in the tiny room, the set was innovative and the use of the office really clever. Dull lighting and expertly placed set dressings set the mood perfectly, including details like the display of The Privilege of Education, an integral book to the plot. The delayed performance time and questionable soundtrack put me off immediately, but director Tasia Jones’ passionate opening remarks more than made up for any wasted time. As the play began, the two-person cast carried that passion through their performances, but they never quite rose to their director’s level.

I’ll admit up front, I’m not generally a fan of Mamet productions, having seen more than my fair share of mediocre companies fail to understand the writer’s unique (and quite brilliant) style. His tendency towards all things morally grey and an almost perpetual consideration of gender roles (even in his predominantly male casts), makes for a fascinating (if sometimes aggravating) dynamic, especially when tackled by a female director. Here, Jones told Mamet’s story artfully, but the production lacked a steady rhythm. As the action unfolded over multiple days in the same office, the tension between the characters progressed strangely, never really hitting any of the appropriate climaxes. The productions notes in the program had the ring of superficiality to them, as though forcedly making a point, an issue that permeated into the production itself.

A production of Oleanna thrives or falls on the chemistry between John and Carol- a professor and his student, roles that (as the production note suggests) “excite the mind without trying to guide the spectator to one side.” The immensely complex relationship between the two characters is a mountain of a job for the actors, who are tasked with holding down the 90-minute production all on their own. The crux of the piece is the ambiguity of the hero and villain roles. Neither character is all-good or all-bad, neither is particularly likable, usually, but nor are they detestable, usually. That’s what makes their power struggle interesting.

Unfortunately, uneven casting took away from that all-important ambiguity. Emily Karel was exemplary as Carol, growing the character from a meek young girl to an electric and emotional force as the play progressed. Cliff Blake, however, proved an unconventional but disappointing John. Stiff and clownish at times, Blake lacked John’s usual spontaneity and condescending air- essential qualities for understanding the character’s motivational and moral ambiguity. I instantly sided with John, which I saw as a fatal flaw in Blake’s portrayal and this production. It’s strange to say, but in a piece as complex as Oleanna, an overly sympathetic character can ruin the evening’s performance.

Oleanna is a play about the ways we interpret the world around us- from the conversations we have to our values and expectations. However, As this production coursed breathlessly to the end and a shocking final moment, I was never convinced that there were two sides to this story. In fact, Blake was so likable and, dare I say, goofy in his role that Karel’s performance lost its poignancy, playing more as the ravings of a manipulative, man-hating feminist. This interpretation, while interesting in a way, is a mere shadow of Mamet’s text, touching on none of the fascinating uncertainty he establishes about the real events of John and Carol’s encounter.

On the other hand, an audience member who doesn’t know the text, would have been free to enjoy this production for all its passionate strengths. Content with a nicer John and a subsequently crazier Carol, Blake and Karel’s performances could have been enjoyed for their commitment, energy and technique. Blake’s sensitivity to nuanced detail shone through clearly, especially during John’s phone calls, showing off the actor’s capacity despite his miscasting, a disservice to the talented performer. I’m convinced that with a longer rehearsal process and more appropriate casting, this production could have reached much more of its potential.

I have faith in the dedication of the production team on their future endeavors. Boasting an impressive collective resume of talent and experience, as well as a daring and ambitious first production, I can’t wait to see Can’t Wait Productions’ next passionate work.