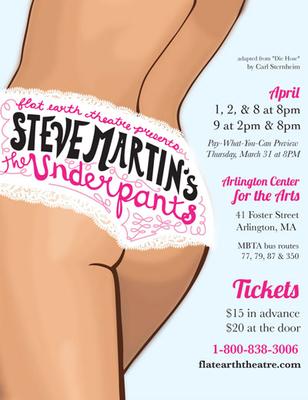 Flat Earth Theatre’s production of The Underpants (by Steve Martin) was a pretty enjoyable way to spend an evening. It was an interesting ride: sometimes I was totally enamored with the actors, and sometimes I was thoroughly underwhelmed by the technical aspects of the show and select performances, but the script saved the day.

I had never seen or read The Underpants before, and hadn’t done much research either (I know, bad reviewer, bad!) so I had only vaguest of ideas as to what I was walking into. I was delightfully surprised. The script is hysterical: some of the jokes are philosophical parodies, some are scatological, and a lot of the farce has to do with underpants (surprise, surprise), sudden entrances and exits, usually into hysterically awkward tableaus, and misunderstandings. It was a delightful script that demanded a certain pace from the production to keep the whirlwind of circumstances going.

This demand was not always met. Pretty much all of the timing could have been tighter (the most distracting rhythmic interruption being the use of tableau, black out, and set change). There are few accepted theater conventions that are reviled by the My Theatre staff as much as the black out-and-set change (“revile” is a strong word, but…). In this case the black outs were never fully black, settling at a gray half light, and the set changes consisted of the movement of two small props by a slow-moving stagehand. It seemed like the props could easily have been snuck into the blocking of the previous or next scene so we didn’t have to stop for them. And it was always immediately after the cast had hit a good, act-ending note, usually in a sitcom-tastic tableau. The black out-prop changes consistently “reset” the play’s momentum, instead of letting it carry.

Another technical gripe I had was the set: I walked into the theater and immediately began worrying that the set would fall on top of the actors during the show. Every once in a while—anytime someone opened or closed a door on-stage—I would say to myself: “Oh God, here we go.” Thankfully, the set didn’t actually fall down, but I think we were lucky on that front.

The actual performances in the play were a mixed bag. Pretty much everyone took a while to ease into the rhythm and timing of the piece. From the very beginning, however, Kathy Berenson was delicious as Gertrude. She was warm, funnily bawdy, charmingly sweet, and touchingly sympathetic. Berenson also truly engaged with the other actors onstage, and mined all of Gertrude’s moments for variety. One of my favorite moments of the play was Gertrude’s decision not to sleep with Theo and her leaving the apartment.

Theo (played by Justus Perry) grew on me, and after his first scene was consistently very funny, bringing out the humor in almost every one of his lines. Perry also displayed an impressive commitment to a real, although very unusual, frank, and abrasive, character.

Maggie Carr, however, was underwhelming as Louise, seeming to huff about the stage, gasping loudly in shocked indignation and widening her eyes a lot. She did have good moments though; my favorite was when, after being swept up into a “tempest of passion” and then abandoned on stage, she just paused, looked around, and said, “…Hello?” It was beautiful. Mostly though, I felt like she wasn’t really engaging with the other actors on stage, and didn’t really grab me.

Versati was … a lot. The character is a self-important, aggrandizing poet, and perhaps it was that type of character that I had so strong a reaction to, but Mike Handelman didn’t help me any. The character is hugely pompous and overblown with his own “poetic” conceits: I so understand the temptation to overplay. But Handelman seemed to channel some of the insane over-the-topness of (specifically) a Jack Black-ian persuasion. Handelman’s approach, although sometimes funny, battled the type of comedy written into the script, and usually ended up overshadowing and undermining the hilarity of the written jokes.

Nick Bennet-Zendzian’s Cohen (with a K) was sometimes frightfully earnest, and sometimes too much to handle. His best moment was when he simply had a frank discussion with Louise. During the comedic moments he was alternately endearing and strained slapstick. I would love to see him in a less farcical play.

The character of Cohen brings up (of course) the matter of the Jew jokes—which, were actually, mostly very clever. However, the odd setting of this particular production negatively impacted said jokes—the script places the action in Germany in the 1910s. The setting and costuming placed this production somewhere between the late 1930s and 1950s in America (the director’s note confirms the 50s). This confused a lot of the historical references (the German king, for example, still exists in the world of the play, and even makes an appearance at the end). With many other plays, the altered setting probably wouldn’t have bothered me—unfortunately, when there’s a play set in mid-century Germany, with a Jewish character and a government clerk, I really want to know whether or not I need to worry about Cohen’s safety. The anachronism of the setting didn’t radically change the meaning of anything in the play, it was just a nagging distraction from the actual performance.