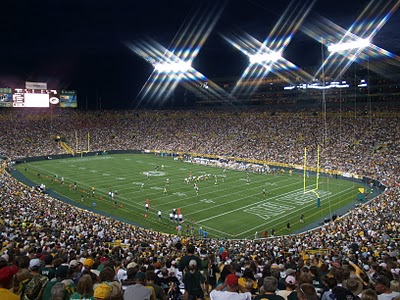 Green Bay Should Have a Super Bowl

Green Bay should have a Super Bowl. I don’t mean that they need to win a Super Bowl (they’ve done that already, 3 times), I’m saying they need to host one. That’s right, the biggest spectacle in sports should be held in tiny Green Bay Wisconsin, population 98,476. This year, Super Bowl XLV is being held in Dallas, Texas (population 1,187,603), in the brand new 1.2 billion dollar Cowboy Stadium (capacity over 100,000). In comparison, Lambeau Field, where the Green Bay Packers have made their home since 1957, has a seating capacity of only 73,128 (after its 2003 renovation). However, it’s hard to ignore the significance of a #1 rating, something Lambeau Field earned in both 2008 and 2009 for best “Game Day” experience from both ESPN and Sports Illustrated.

Unfortunately, the Super Bowl isn’t about “the game” but more about “the event”. This means that the decision on where the Super Bowl is held is not based on stadium conditions or size or even weather conditions (the weather forecast for Green Bay on Super Bowl Sunday is 30ᵒ F with 20% chance of snow showers), but on infrastructure. Does the host city have enough hotel rooms? Are the airport and transit system (I am not even sure Green Bay has these) equipped to handle the hundreds of thousands of visitors who come, not to see the game in person, but to be part of the pre and post game festivities. Because of this, Green Bay, even with its rich NFL history (Green Bay played in and won the first two Super Bowls ever and the trophy is named after legendary Green Bay coach Vince Lombardi), will never host the Super Bowl.

This is a shame for not just the faithful Green Bay fans (of whom there are tons- all season tickets have been sold out since 1960 and there is a waiting list of 81, 000 with an estimated waiting time of 30 years) but to all die-hard, purist football fans. Lambeau Field is to football what Yankee Stadium is to baseball. It deserves to host a Super Bowl. Many of the infrastructure concerns could be accommodated by twining “the event” with the city of Milwaukee, which is only 186 Km away. Where there’s a will there’s a way to make it work, it’s just a matter of putting “the game” ahead of “the event”. If the city of Green Bay is good enough to host the NFC title game, it’s good enough to host the Super Bowl. The only difference is that you’ll need your goose feathered winter parka rather than your golf shorts to enjoy it. But who cares, we’re football fans.