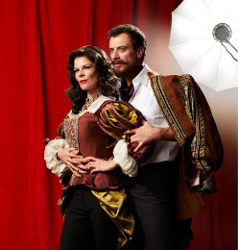 Liking and Loathing “Kiss Me Kate”

Here’s the thing: the backstage aspects of The Stratford Shakespeare Festival’s production of Kiss Me Kate (you know, the parts where the actors are playing actors, not the parts where the actors are playing actors playing some of Shakespeare’s broadest characters) made for a cute, light and altogether not all bad musical. That stuff, the character moments in the well-crafted costumes and the clever, subtle staging, was all pretty good. Not groundbreaking or transcendent in any way, but engaging and entertaining and entirely worth the price of admission.

The dancing was sublime, the chorus incredibly capable (especially Kyle Golemba, a standout of the ensemble year in and year out). The leads were pretty good too. Unlike in Evita, here Chilina Kennedy slides easily into her role as ingenue Lois Lane. This was Kennedy’s effortless part of the season (comparatively speaking), and that effortlessness showed, her natural charm and airiness shining through (in both good and bad but ultimately appropriate ways). Her rendition of “Always True to You in My Fashion” was perfect. Juan Chioran and Monique Lund anchored the cast well as lead actors Fred and Lilli (“So in Love” was particularly lovely) and Steve Ross and Cliff Saunders were at least mildly amusing as the shticky gangsters.

“Too Darn Hot”, as sung by the unbelievable Josh Young, was easily and predictably the show stopper. The best vocals in the piece, it also sported the most impressive choreography from Tracey Flye, perfectly showing off the brilliant dance ensemble.

Unfortunately, the onstage crap (the play-within-the-play Taming of the Shrew stuff) was so broad, so annoying, so flat-out idiotic that the whole thing undermined itself and I left the theatre miserable. Nothing is quite so depressing as squandered potential and Kiss Me Kate at its best showed off the incredible potential of this cast, while at its worst it showed how unworthy it was of their talents. There’s always one, at least one production a year at Stratford that is panderingly broad and I simply hate. This year, for at least a couple scenes, the company of Kiss Me Kate had me thinking that maybe it wouldn’t be them.