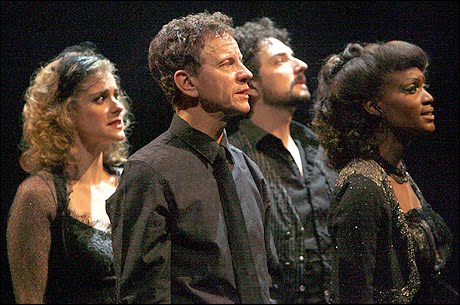 Jaques Brel IS Alive and Well…

… but he’s not living in Paris. He’s in Stratford, hanging out with Brent Carver and having a grand old time. Jaques Brel himself may just be the star of this show, no offense to the four sensational performers featured in The Stratford Shakespeare Festival’s staging. It’s his songs that really make the piece fly. They are haunting and clever, funny but poignant, beautiful and affecting. A song cycle in which the performers float between seemingly unlinked numbers and the characters within them, there’s nothing really for a director to do with this piece other than to cast great people, stage it fluidly and depend on Brel’s songs to carry the show.

And carry it they do.

It would not be humanly possible to find a cast more talented than the one that takes on Jaques Brel is Alive and Well and Living in Paris this season at Stratford. Jewelle Blackman, Mike Nadajewski, Nathalie Nadon and Canadian theatre icon Brent Carver take on equal roles as the uber talented vehicles of Brel’s unique brand of genius. Mort Shuman and Eric Blau’s English translations are inspired, but not quite as inspired as director Stafford Arima’s decision to leave a one or two to shine in their original glorious French. The delicious “Ne Me Quitte Pas” is a perfect example, as well as my favourite number in the show.

I’d never heard of Jaques Brel going into this Stratford season and will most likely never hear him after. But this beautiful production is as much an expected delight as anyone could ever ask for.