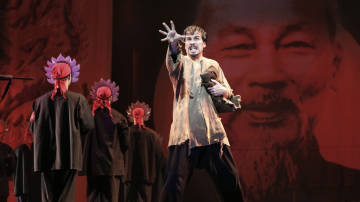 A Schonberg and Boublil Double Feature

Last week was a strange week of musical theatre for a couple of My Theatre writers. Wednesday evening saw us taking in a professional touring company at the lavish Four Seasons Centre in Dancap’s production of Miss Saigon. The following night we were sitting in the much more humble Al Green Theatre taking in a company of 12-21 year olds doing Les Miserables with No Strings Theatre. The contrast was startling but the ironic nature of the contrast perfectly delicious.

Both pieces were written by blockbuster musical team Schonberg and Boublil. Both are melodically beautiful musicals with deep characters and dark but inspiring stories. But these 2 productions shared very little.

Let it first be said that I objectively consider Les Mis a far superior piece as written. It’s fairly close to perfect in my estimation whereas I find Miss Saigon to be a pale imitation of the opera it’s based on. Though beautiful, the characters just aren’t quite as engaging, the music not quite as memorable and the story not quite as epic as that of Les Mis. There’s also the whole issue of that ghastly engineer robbing the much-more-interesting Kim of absurd amounts of stage time. Nevertheless, in assessing these 2 productions, let’s pretend for a minute that they’re on equal footing going in.

Dancap’s production is brimming with talented, trained professionals. It has professional set designers, directors, stage managers, choreographers, musical directors and cast (not to mention a full pit of the best in the business), all being paid handsomely for their troubles. No Strings (a youth company only in its 6th season) has students as designers, stage managers, associate musical directors, pit and cast, many of them volunteers. Their professional director, musical director and choreographer are also teachers, tasked with giving classes and developing technique while running rehearsals. They have minimal budget to costume a 40-something person cast, cover set and sound equipment. And they have a space crunch that has them using a synthesizer to augment the sound of a small band and take the place of a strings section. Their casts are filled largely with non-singers, only a couple of them possessing strong vocal technique when they reach artistic/musical director Denise Williams at the beginning of July. And they had only 3 and a half weeks this summer to mount perhaps the most ambitious musical in the canon. To compare these 2 productions might not be entirely fair, technically.

But for some reason, no matter how much money and expertise they have, the company of Miss Saigon seems a little lost. The opening number lacks energy. The GIs should have all bro-ish energy and pent-up verve, but they seem comfortable. The chorus of callgirls, on the other hand, should be practiced, formulaic in their seductions, but they seem uncomfortable in their costumes and with their daring blocking. The chorus work as a whole falls completely flat. Add on the imperfections a seat in the front row reveals (stage hands hiding behind set pieces, nervous bit players stepping on their entrances) and the production is definitely in need of some polish. Ma-Anne Dionisio in the title role is perfection (technically, dramatically, in every which way- she even sheds real tears) but her leading man Aaron Ramey (though in possession of a stunning tenor) lacks the charisma and pathos the role demands. Becca Ayers undermines her own performance as Ellen when she grossly overacts and her sublimely strong vocals aren’t enough to make up for it. Josh Tower is an excellent John and Kevin Gray handles himself well as the horrid engineer but unfortunately is a victim of his useless character (who unbelievably comes out last at curtain call, usurping the leading lady). Despite some high points (Ramey’s voice, some beautiful songs, Dionisio’s entire existence) Miss Saigon lives up to none of the potential the company’s assets set it up to have.

And then there’s No Strings. Not all these kids could hit their notes. Not many of these kids had the life experience to fully realize the complex characters. Their sound board was badly run so some solos got missed, they had to move the set themselves instead of having it on tracks like the pros and they certainly couldn’t land a helicopter on stage (Miss Saigon‘s trademark move). But I left that theatre on Thursday with a song in my heart and the ticket information number in hand, because I absolutely had to go back.

Those kids went after that show with more determination than I’ve ever seen. When they punched the air and declared revolution, the audience was on their side. When they grieved we grieved, when they cheered we cheered and by god when they died we wept. Each performer in the 2 casts (A:Thurs/Sat matinee and B: Fri/Sat evening) brought something different to their part. Valjean A, Kurtis Whittle, delivered a heartbreaking “Bring Him Home” during which I was incredibly happy I’d worn waterproof mascara. Valjean B, Jonathon LeRose, was the consummate actor of the cast, all strength and warmth from curtain up to curtain call. Eponine A, Amanda Li, infused the role with vulnerable sincerity while Eponine B, Lauren Voorpastel, conquered the trademark songs “On My Own” and “A Little Fall of Rain” like a lifetime student of the role. Madame Thenardier A, Tinishya Gillis, brought the house down with impeccable timing while Fantine B, Olivia Cox, was the most warm and sympathetic Fantine I’ve seen in quite some time. Conor Ling’s Enjolras was a sight to see with incomparable charm, commitment and a leadership quality so pronounced that I was surprised the audience didn’t jump up and join the revolution alongside him. Gavroche A, Isabel Terrell, mastered the fun role with great pluck and youthful maturity (does that make sense?) but it was Cara Tors as Gavroche B whose perfectly executed death scene really stayed with you. 14-year-old Lucas LaRochelle (Marius A) carried off the challenging ballad “Empty Chairs at Empty Tables” with technique far beyond his years and I would happily listen to Cody Weldon (Javert B) sing “Stars” anytime. James Donaldson and Maral Chouljian anchored the student revolutionaries well and the pit band, led by the remarkable Sean Mayes, was brilliant. These kids were, well, they were the whole point. The point of youth programs, the point of community arts support, the point of theatre.

At the end of the day, the trappings don’t mean a thing. For all its flash and professionalism, Dancap’s Miss Saigon inspired nothing compared to No Strings’ little Les Mis school edition. Give me commitment, give me energy, give me a solo-less 12 year old belting from the back of the chorus alongside an 18-year old leading man who’s been with the company for years and worked his way up from playing a monkey (true story). Give me heart and I’ll choose it over prestige any day of the week and twice on Sunday.