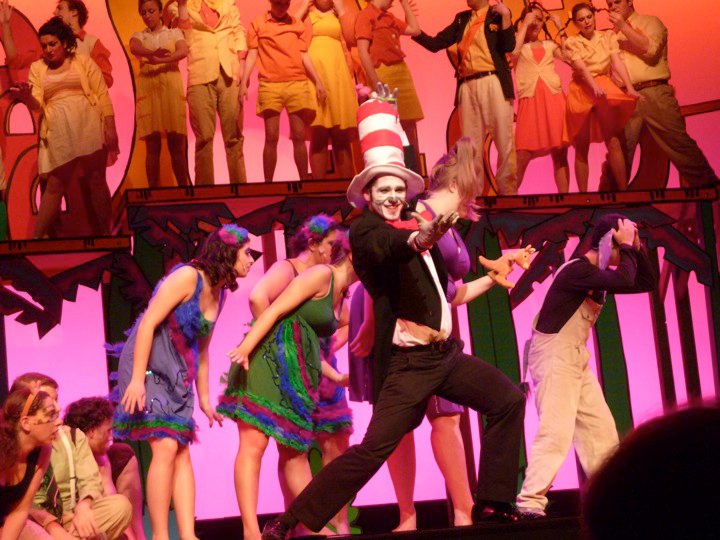 Oh The Thinks You Can Think!

Last weekend BU on Broadway premiered their spring mainstage production: a lighthearted and uplifting musical, a favourite of mine, Seussical. Though plagued with the occasional flaw, the production was for the most part absolutely wonderful and easily one of my favourite things I’ve seen in my time in Boston.

Seussical itself, written by Ahrens and Flaherty, is a joyful romp of a show that leaves you smiling no matter what. Filled with memorable characters like Horton the Elephant and Gertrude McFuzz, beautiful ballads like “Alone in the Universe” and “Solla Sollew” and wonderfully kitschy dialogue that strictly adheres to Dr. Seuss’ famous rhyming couplet format, Seussical is really a wonderful play.

Right off the bat with the raucously great opening number “Oh The Thinks You Can Think”, Seussical inhabits a colourful world filled with cats in hats, sour kangaroos, trouble-making monkeys and birds of a single feather. The world of Seuss is one where the “smallest of small” and the “largest of all” can be friends and anything can happen if you “just think”.

If the play has a problem, it’s that it significantly longer than the story can support. Though filled with show-stopping wonderful songs like “Oh The Thinks You Can Think”, “It’s Possible”, “Alone in the Universe”, “Notice Me, Horton” and “Solla Sollew”, Seussical is polluted by no fewer than 32 other musical numbers. Dull duds like “Circus McGurkus” take up time and barely move the plot forward, basically serving as a platform for some of Seuss’ quirky but neglected characters to show make their mark on the play. But ultimately, the adorable wonderfulness of Horton, Gertrude and Jojo’s journeys overshadows any tedium and keeps the audience on board the cooky coupleted ride of Seussical the Musical.

BU On Broadway’s production perfectly encapsulated what Seussical is all about. As directed by the company’s resident ingenue Sarah Jill Bashein (whose recent credits include Belle in Beauty and the Beast, Janet in Rocky Horror and Woman #1 in Songs for a New World), Seussical was appropriately bold and colourful, sweet and poignant, goofy but smart. The Seuss illustration-inspired set allowed for great levels and a good sense of location with trees on wheels to represent the Jungle of Nool and little Who houses to be wheeled in when the action moves to Whoville. The costumes were sweet and representational- no wings, no trunks, but rather animal ears and feathered dresses paired with character movement that struck the delicate balance of a personified animal in child-inspired detail. The audio levels needed a little more refining but the orchestra and vocals, music directed by wunderkind Jonathan Brenner, were standout.

Overall, the story and characters were represented well. The choreography, though simple, was beautiful and the lighting stunning. The blocking was well thought-out and the characters well defined.

The crucial role of Horton was played by the always excellent Matt Lerner, who’s beautiful tenor voice was in fine form this week alongside his incomparable charm and emotional commitment. Easily one of my favourite performers of the company, Lerner will be missed once he graduates this spring after a run of leading roles including The Baker in Into the Woods, Jimmy in Reefer Madness, Seymour in Little Shop of Horrors, Brad in Rocky Horror and Man #2 in Songs for a New World.

Also in fine form was relative newcomer Colleen Martorano who brought great energy to the role of Mayzie LaBird. Jessie Kavanagh’s Jojo was charming and well executed, while one of OB’s newest superstars Stephanie Gray stole most of the Whoville scenes as Mrs. Mayor with her stunning soprano and never-failing animation. The highlight of the stellar chorus was OB Vice President Matt Cobb in typically enthusiastic fashion.

Tavia Merchant’s Sour Kangaroo was brash acting-wise but her vocal chops proved enough to temporarily make you forget to keep breathing. Liz Furze, as Gertrude McFuzz, was one of the few castmembers to struggle with her vocals (much of “All for You” was lost to inaudible high notes) but she was so thoroughly charming and sounded so beautiful on the notes that were in her range that she was still a resounding success in the role.

Basically Seussical comes down to the audience. You can be that person, who sits there and laments every simplistic musical theme, cheap pun or missed note. But if you’re not, if you’re someone who can enjoy the theatre for all its imperfections, Seussical, especially Bashein’s BU On Broadway production, can be the happiest show on earth.

*This article has been edited to exclude a mildly negative mention of a performer who wishes to not appear on the website.