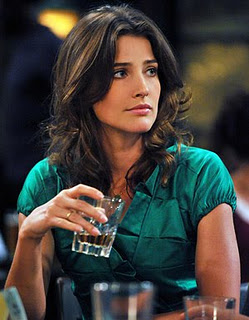 It’s not often that How I Met Your Mother impresses with it’s dramatic performances. Typically, it’s the comic chops of the actors that stand out and add to the overall entertainment of the show. In this weeks “Of Course” Colbie Smulders went above and beyond her usually captivating (and often underrated) performance by adding some drama to her list of accomplishes.

The episode centered around Barney’s attempts to bed Anita, a strong-willed author whose novel tells women how to just say “no” and find the right man. Anita was played by Jennifer Lopez in a not-so-surprisingly fitting role (recall a few years back when J.Lo poked fun of herself on Will and Grace). Partially through the episode, Robin admits that Anita and Barney’s meeting was not a coincidence, but rather she met Anita on her news show and the author offered to teach Barney a lesson. Thus, Anita’s seductive ways and subsequent abandonment of Barney makes sense. The queen of “no” refuses to have sex with Barney until date number seventeen.

While Barney’s storyline drove the comedy of the episode (thanks entirely to NPH and J. Lo), it was Robin who had the standout arc. For the first time since her break up with Barney, the audience is given insight into Robin’s mourning. Lily admits to Marshall that she had previously seen Robin cry over Barney. Later, Marshall spreads the news to Ted and when the three catch Robin crying in the bathroom they finally confront Barney. What follows is one of the most heart-breaking and realistic portrayals of a break-up aftermath. Barney, being the genuinely nice guy he is, checks on Robin and apologizes for flaunting his many post-relationship conquests. Smulders delivers an emotionally charged performance as she tells Barney that his actions makes her feel as though she’s “just another number” to him. In the end, Barney gives his planned super date (the most romantic night which would have resulted in conquering Anita) to Robin after she shows her distress over him never showing her special treatment. To further his awesomeness (or maybe his guilt?) but does an even more noble thing by letting Don be the escort of the date.

While some fans loved the Barney-Robin relationship, others were still left with a sour taste in their mouth when it just didn’t feel right. Personally, the biggest problem with their relationship was the end. It was unbelievable to just assume that two people could immediately go back to being friends after having such a significant relationship (and this was significant since Barney actually settled down). For the first time, my anger for the writers of this show overpowered any entertainment derived from watching. It’s one thing to shift the plot in order to focus on comedy but it’s another thing to disregard drama for the sake of humor. This week’s episode restored my faith in HIMYM. Using their token flashback sequences, the writer’s once again proved that there was a path all along. Several clips from previous episodes were seen again and extended to showcase Robin’s emotional mourning period. Relationships, no matter how good or bad, always result in mourning on one person’s part at least and it was a refreshing taste of real life to see Robin’s break down post break-up.