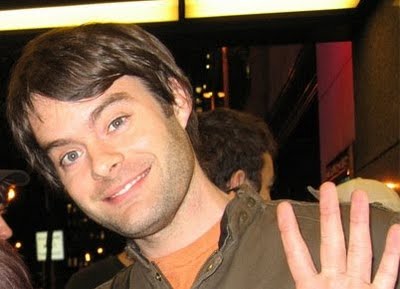 Saturday Night Live Weekend Update Thursday premiered tonight (alongside a decent season premiere for The Office and a promising series premiere for Joel McHale’s new show Community) and it exceeded expectations (which, in all fairness, weren’t particularly high).

The episode as a whole was just average (the concept of an overflow Weekend Update segment on Thursdays was brilliant last fall when there was a ton of election coverage to be done but is now a little tedious since all they have to report on is health care). It was nice to see Amy Poehler back behind the desk and see the burden lifted from head writer/only remaining anchor Seth Meyers’ shoulders a little bit. It was even funny when they made mistakes and were forced to improv around it. But the highlight was, as it often is on any Saturday Night Live, Bill Hader.

The 31 year old Oklahoma native/ Chicago Cubs fan/ Star Wars geek steals the show of every movie he does (including many an Apatow farce as well as this summer’s joyful Battle of the Smithsonian, in which his General Custer stood out as a highlight) and is consistently one of the best things about SNL; tonight’s episode was no different. He pulled off a dead-on impression of democratic political operative James Carville that had me laughing out loud.

Hader can next be heard in the starring role of the animated film Cloudy with a Chance of Meatballs (released tomorrow)and be seen in his element in the upcoming season of Saturday Night Live (premiering soon on NBC).

PS: I love a good “Really!?!” segment and my love of Seth Meyers only continues to grow, so I love any Weekend Update I can get.