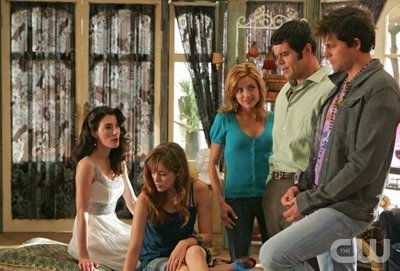 Tonight was the last ever episode of Valentine on The CW. It’s not as if I didn’t know this was coming, every additional episode that showed up on my PVR was a posthumous gift from the darling show. But what I didn’t expect was to already miss the show so much.
It was always a sweet, sugary 60 minutes of happy, but it wasn’t until this final batch of episodes that I considered Valentine to be great television. Watching these final 4 episodes that aired this summer, I realized that Valentine was really a lot more than it seemed.
Characters that are superficially perceived as archetypes are actually interesting and endearing people once you get to know them. Danny’s inner hero was hidden by his smarmy and sarcastic exterior; Leo was a loyal softy, despite Herculean strength; and Ari really was just trying to keep his family safe. Kate even grew on me (though the mortal remained unimpressive next to the gods).
Despite a pretty weak mystery arc about someone trying to destroy the gods, the stories of Valentine kept me interested and invested in the show. Though the final episode offered some sort of milestone in both major “will they or won’t they” relationships in the series (Kate & Danny and Phoebe & Leo), my greatest regret about saying goodbye to the series so soon is that we won’t get to see those play out (particularly the lovely relationship between Leo and Autumn Reeser’s delightful character Phoebe). Mystery-wise, the last scene left the series on a cliffhanger that is also a deal-with-able ending point (SPOILER ALERT: Ari gets killed).
Though its series through-lines developed into decent stories as the episodes wore on, the most impressive thing about Valentine was at the beginning and still remains the weekly client romances. The premise of the show being that the gods of Valentine, Inc are responsible for uniting a new set of soulmates each episode, it was easy to imagine that they would soon begin to repeat their love stories. In fact, I wrote an article to that effect last fall (click here to read it). But Valentine proved me wrong. In each of its 8 episodes, the show told me a new and interesting story of soulmates. There were couples whose families were standing in the way of their love, old friends falling for each other, enemies learning to love each other, college roommates realizing that the love they shared was true, divorced couples reuniting, smitten neighbours overcoming what stood between them, childhood sweethearts fighting for each other and shy singles battling their fears of rejection. We saw couples of all ages, spanning socio-economic backgrounds, with diffrent religious affiliations and romantic histories, homosexual, heterosexual and cross-cultural. Because, after all, Valentine was just about love; and, as Grace would say, love doesn’t follow rules.
Valentine was everything that the current definition of “good TV” is not. It wasn’t gritty and dark like the uber popular CSIs or critically lauded The Shield. It wasn’t sexy like Gossip Girl or Grey’s Anatomy, hip like Dexter or True Blood or cult-y like Flight of the Conchords– but I still think it was good TV. It was sweet and happy and optimistic. Valentine kept me guessing, kept me laughing, kept me caring about the characters, and, most of all, it always left me a little happier than it found me.