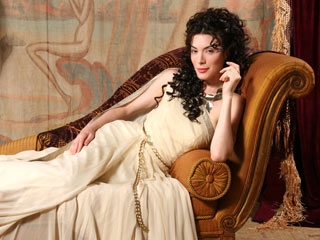 I watch Valentineand so should You.

I don’t care what anyone says, I love Valentine.

This week’s episode was yet another delightful hour full of warm fuzzies. And this week’s romantic hero? Possibly even more adorable than the 2 utterly adorable romantic heroes of the weeks before. The devoted best friend, Roland, was swoon worthy in episode 1. The sweetly romantic perfume scientist, Morgan, was lovely in episode 2.

But Tucker, episode 3’s leading man, topped them all. A true theatre lover, Tucker was a struggling artist who owned and operated his own black box theatre; writing, directing, producing, acting,…the works. I’m sure you can imagine the kinds of scenes in this episode: him seeing through the flighty screen actress’ party girl demeanor, seeing what she’s really capable of and helping her to bring out her real talent, etc… needless to say I quit my game of tetris, stared at the screen, lay my cheek in my hand and sighed “ah me” at the sight. It was hopelessly cheesy, but as is the case with Notting Hill (which they mocked in the episode, by the way, I did not appreciate that), I loved the cheese. Even more so than I have every previous week, because I’m a sucker for a thespian.

But here’s the problem: there are only 3 love stories and now Valentine has done them all. Sure they can throw in new variations and obstacles, but ultimately the show is doomed to repeat itself now. Don’t believe me? Think about it, every story is one of the following:

Love Story #1: the natural progression. This is Morgan and Nisha in episode 2 “Daddy’s Home”. They met, they fell in love, an obstacle or 2 got in their way, and that was pretty much the story. This is Romeo & Juliet, Marius & Cosette, Buffy & Angel, Meredith & McDreamy, Marshall & Lily.

Love Story #2: the best friends. Roland and Joanna from the Pilot. They met, they bonded, they leaned on each other, supported each other, grew to need each other, but were most likely in love with other people. Then one day one of them actually sees the other, in a way they’ve never looked at them before. Then voila! love. Sometimes perfect, often unrequited and most frequently played out on TV. This is Beatrice & Benedick, Emma & Knightley, Monica & Chandler, Jim & Pam, Dawson & Joey.

Love Story #3: the enemies: Tucker and Vivi from episode 3 “Act Naturally”. They don’t like each other, often because of inaccurate first impressions, unfortunate circumstances or someone doing something stupid at the wrong time. Then, like the best friends, they start to see each other, respect each other then WHAM, they’re making out. This is Kate & Petruchio, Elizabeth & Darcy, Anne & Gilbert, Veronica & Logan, Lyla & Riggins.

And episode 4… wait, there’s nothing left. Time to re-use and recycle, reduce is out of the question, I like this show too much to reduce.

yes I just made an environmental strategies joke- don’t judge me.

WATCH VALENTINE!!!!! Your heart will thank you.