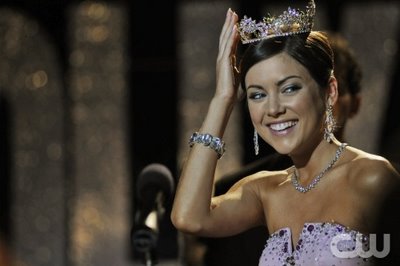 The spinoff’s inaugural season was so unbalanced, so ridiculous and so annoyingly typical that I can barely believe that I watch it. That said, the new 90210boasts a few characters that are worth returning for, and so I do.
The most credit has to go to the adorable Tristan Wilds, an actor of a calibre much too high for his current day job. Wilds took a boring character and gave him a sparkle worth watching. Dustin Milligan, similarly, managed to make me not hate Ethan. In fact, I don’t hate Ethan to such a surprising extent that I’ll really miss his character next season when he disappears (producers announced in April that Milligan would be leaving the show). And the gorgeous Jessica Stroup, as obnoxiously “rebel” Erin Silver, was charming to an extent that I kind of loved her… until they had her go crazy and make Dixon’s life difficult, then I promptly abandoned all love of the whiny “non-conformist”/popular girl.

And while the central characters of Annie and Naomi are revolting on multiple counts (though Naomi, at least, has her moments of redemption), a pleasant surprise came in the forms of Jessica Lowndes and Michael Steger as Adrianna and Navid. Steger is consistently engaging and somehow manages to convince me that his sweet as sugar character is honestly sincere. And Lowndes, another actress who is clearly slumming it on 90210, proves herself most prominently when she takes on a role within a role when Adrianna slips into thespian mode.
The “adults” of the show are, perhaps, the biggest departure from the original series. While Cindy and Jim Walsh were dorky, slightly dowdy and believable parental figures, Debbie and Harry Wilson are basically supermodel placeholders with the occasional funny bit of action (the pot brownies in the finale were outrageous yet mildly hilarious). Meanwhile, annoyingly attractive English teacher Mr. Matthews is somewhat delightful (if stereotypical) and I do enjoy the appearances by original 90210 characters Kelly (Jennie Garth), Brenda (Shannon Doherty) and Donna (Tori Spelling).
Unfortunately, the producers (who are of, at best, questionable intelligence, despite showrunner Rebecca Rand Sinclair’s TV resume, which includes writing stints on both Buffy and the Gilmore girls) have decided that, alongside Ethan, recurring cast members from the original series will be notably absent from season 2. Don’t they know that there’s a reason that the new group gets a tenth of the viewership the old one got?
So, where will the series go from here? Well, even though the finale showed him being carted off the military school, Naomi’s torrid love interest Liam is slated to be back as a regular cast member next season. Ethan’s departure will come on the heels of his confession of love for Silver (by the way, how random was that?!?!). Adrianna will start to cope with giving up her baby; Navid will be by her side. Dixon and Silver will have to move forward after the Ethan debacle and knowing that they have more drama than they’re worth. Naomi has to eventually realize that her sister is a massive bitch, but in the meantime she’ll torture Annie a bit more. And as for Annie herself, last we saw of her she was driving drunk and leaving the crime scene after she hit someone- the Annie volcano has erupted, as Liam would say, and it was a joy to finally get to laugh at the expense of the vapid goody-two-shoes who is supposedly the heart of the show.
FINALE GRADE: C-
SEASON GRADE: C