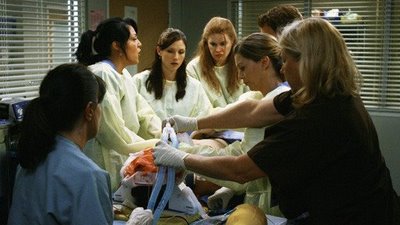 *CAUTION, SPOILERS AHEAD*
Liza Weil, Zach Gilford, Debra Mooney- what more can I ask? OK, well that’s not exactly fair. As much as I adore me a little Matt Saracen, rejoice at the sight of Paris Geller back on my TV screen and smile whenever I remember Edna Harper, it takes a lot more than a stellar guest star lineup to impress me with a series finale.

Luckily for the folks over at Grey’s, they pulled this one out. By utilizing their actors in better ways than they have in years and embracing their lighter side in conjunction with their dark, the Grey’s team surprised me this week with a commendable finale to an unremarkable season.

Though still plagued with some of the series’ more persistent issues (hello annoying new character #437, Izzie’s oncologist), the finale also played to the series’ strengths.

One of those strengths, though they’re often not remembered for it, is their humour.

– Giddy Bailey with the surgery robot, making light saber noises was priceless and wonderful.
– The Arizona scene in which she cries and challenges the chief on trying to steal Bailey from pediatrics was kept light and funny. The effect was to lower the melodrama of every other disaster surrounding the characters.

And there’s a reason that the best supporting actress category at the Emmys is always a Grey’s party, they have one of the best casts around. In this episode they got to strut their stuff like they haven’t since their heyday in season 2.

– Justin Chambers (the consistent highlight of the roster) delivered another varied and human performance in the finale. Though, in all fairness, if there’s one actor who’s been given great material this year it’s him.

– Katherine Heigl, who’s had the weight of the world on her shoulders drama-wise this season as retribution for her self-important comments about the material she got last year, was nothing less than lovely in what could be (but shouldn’t be) her final scenes on the show.

– Sandra Oh and Kevin McKidd laid it all out on the table and I love them for it.

– Eric Dane and Chyler Leigh charmed me into thinking they’re not a gross couple.

– Jessica Capshaw convinced me to love Arizona despite my issues with new Seattle Grace doctors with a stirring and self-deprecating performance. And Sara Ramirez is so great that she deserves a love interest as convincingly authentic as Capshaw.

– and Chandra Wilson is a goddess who under no circumstances deserves to not have won an Emmy yet.
One liners. Grey’s has always been good at crucial and memorable moments and the witty and poignant dialogue that goes with them, assuming they can stay out of cheese territory. Last night’s highlights include:

– the ‘new, happy’ Meredith tells her best friend “I love you Christina Yang”

– Meredith and Derek’s vow to “love each other even when [they] hate each other” perfectly sums up my relationship with the show: I hate it sometimes but I will always love it.

And, the single most important thing in making Grey’s Anatomy‘s fifth season finale a success: it’s own notoriety. You see, for more than a year now, drama queens Katherine Heigl and TR Knight have been all over the media as publicly unhappy with the show. Claiming that they haven’t been given any good material to work with, the two actors have made moves to be let out of their contracts. But showrunner Shonda Rhimes is notoriously hush-hush, reminding Grey’s fans that the power’s all in her corner to decide whether George or Izzie or both lives or dies. So what do Shonda and her team do? They leave the audience, the media and the actors suspended with both characters’ lives hanging in the balance. The decision to use the highly public contract disputes to heighten the tension of an otherwise melodramatic cliff-hanger was pure genius (a rare adjective in Shondaland). If you’ve got the attention at the water cooler, it’s a sin not to run with it.

Last but not least we have to give kudos to a Grey’s Anatomy standard, a golden oldie trick: the big reveal. I’ve got to hand it to them, I didn’t see Addison coming in season 1 and I certainly didn’t see the George reveal coming at the end of this one. In the current TV climate it takes a lot to surprise me, but with the help of TR Knight and some really impressive makeup people, the Grey’s team did it.

But it wasn’t just George’s fate that threw me through a loop. It wasn’t the earth-shattering performance from Chandra Wilson or the sucker punching chemistry between Christina and Owen. I was shocked by the simple fact that Grey’s Anatomy might have just given us one of the better finales of the season… straight from the blah world of Shondaland.
Finale Grade: B+
Season Grade: B-