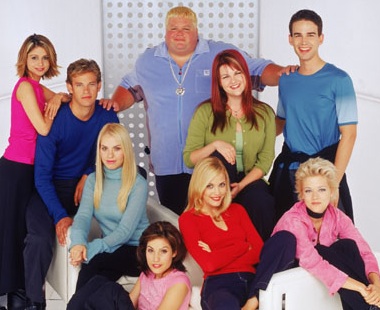 Popular on DVD. This satire of high school soaps was a favourite of mine back when it originally aired and still manages to make me laugh, even now that I’m older and more cynical. Though Sam and Brooke drive me insane, Harrison and Carmen remain two of my all-time favourite television characters and Nicole Julian is one of the greatest villains of all time.

Definitely Maybe. Rachael gave it a good review on “I watch movies then talk about them” but I never got to it at the theatres. I watched it tonight, though, pay per view in a hotel room in Montreal and was completely delighted. The previews nowhere near did this film justice. It was so delightful that it’s earned itself a spot on my shelf among some of my favourite romantic comedies like When Harry Met Sally and My Best Friend’s Wedding.

The TV Addict Podcast Season 2. When TV Guide tragically cancelled their podcast it was a good thing I had an old standard to turn to. The first podcast I ever listened to, TV Addict Daniel Malen and his friend Ari’s podcast is just as great now as it was 2 years ago when I first discovered it. Daniel’s podcast and blog paved the way for this fellow Torontonian to talk TV.

SYTYCD’s Matt and Kourtni. Alright, I love Twitchington to death (particularly the Twitch part) and think Joshua might be the sweetest guy around and think Mark and Chelsie make the coolest odd couple ever but I have made my decision on my clear favourites for So You Think You Can Dance Season 4, and it’s none of them. Without a doubt, the charismatic and endearingly quirky tall couple Matt and Kourtni are my favourites. I can’t help myself, every time they get up to dance I start to cheer- I simply love them and fear for their lives every time America refuses to vote for them.

The Backstreet Boys’ Greatest Hits. Seriously, try not singing along- try it! I love them… go ahead, judge me.