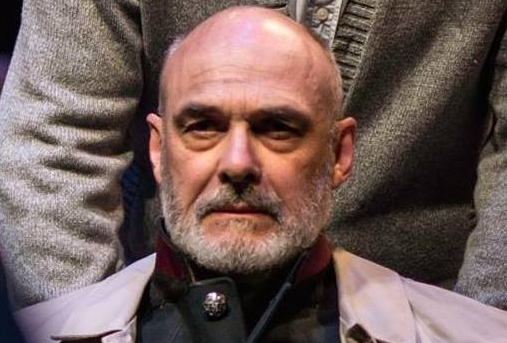 One of the best productions of the year, The November Ticket’s Butcher began with the arrival of John Koensgen. As Josef- a mysterious man speaking an unknown language, wearing a military uniform and santa hat with a butcher’s hook hanging from his neck- John mesmerized with a mostly silent performance as the play’s dramatic twists quickly unspooled his horrific past.

We talked to the Outstanding Supporting Actor nominee about his mysterious character and the life of a Lavinian but he kept as many Butcher spoilers as possible tightly under wraps.

Can you remember your first experience with theatre?
I was asked to act in a summer show for a small company in Ottawa in 1976. It was a farce which they were doing in parks around the city. They received a grant to do it but were actually using the grant to fund their season. There was no money, but I did it as a favour for a friend I met at the Carleton University radio station. He had directed a couple of radio plays I was in. I was in Biology at the time and working at the station. I had no interest in theatre, and at 25 years old, I didn’t even think about it as a hobby because I’d never been involved in it. To make a long story short, I ended up in a play that fall written by one of my fellow cast members from the summer show. It was a challenging part and during the process I discovered a passion for acting and the theatre. I dropped everything. Luckily, I quickly got a part in the season of that small company doing Waiting for Godot. It paid a small amount and I’ve been acting ever since.

How did you develop your skills as an actor?
I had no formal training and no experience when I started. I decided I needed to read some books on acting before taking that role in the play written by my friend. I went to the university library and looked in the catalogue under “Theatre” and “Acting” (no computers back then, just drawers of cards). I picked Brecht’s On Theatre, Artaud’s Theatre of Cruelty and Grotowski’s Towards a Poor Theatre. They weren’t really helpful, although Grotowski mentioned something about breath being a point of departure, so I tried that and, low and behold, I thought I understood my character. It was an amazing discovery. Not that I really knew what I was doing but I imagined.

I worked with my first great teacher, Frank Canino, on the job. He directed Waiting for Godot and later the next year Ashes. Just after Ashes closed I was asked to be part of the National Arts Centre English Theatre Company. Over the two years I was a member of the company, I felt like I was going to school. We had very extensive voice training, lots of work on classical and modern texts, stage combat and movement. Plus, I was working with and learning from to a lot of experienced actors.

My next big learning experience was when I taught stage combat at The National Theatre School over a four year period. I had the opportunity to work alongside great teachers and artists and soaked up as much as I could.

How did you get involved with Butcher?
I was asked to audition, which I did on my phone! I held it in front of me and did a selfie video of the scenes. I sent it to my agent, Kish Iqbal at the Gary Goddard Agency and waited. I got the part!

Your character is mostly silent throughout the play. How did you ensure that his emotional journey still came through?
I listened to the other actors while maintaining my principal action… I don’t want to really reveal anything… it’s a mystery!

Many of the lines you do speak are in an invented language called Lavinian. Was it difficult to master? How do you approach making yourself understood in a language that the audience can’t possibly understand?
There’s no denying that learning to speak Lavinian [was] difficult, it was. The secret to any part though is knowing what you’re doing in the moment, what you’re going through. So, no matter what language you speak you’ll be understood emotionally. It’s no different than speaking English. You leave the “understanding” to the other characters and let the audience “get” the relationships and what you’re saying.

Butcher is full of mysteries and twists so we’re going to throw out a *spoiler alert* so we can ask about playing a war criminal. Did you do much research into the kinds of real-life atrocities perpetrated by the people your character was based on?
Dealing with the play wasn’t easy at first. I had to get through that. It’s not something that I normally deal with, I leave my work at work. This was different, perhaps because I was also learning Lavinian at the time, it seemed to overwhelm my psyche. After a couple of weeks of rehearsal I got through that. We did look at a few really awful videos from conflicts and read accounts from some which had similarities to the play. We also did individual research and presented that.

What would you say is the most important conversation you had with your director in developing your interpretation of the character?
Difficult question… I don’t want to give away anything!

The entire cast of Butcher is nominated for MyTheatre Awards this year. Tell us about working with each of them.
Three of us had done the premiere in Calgary at ATP the year before, that’s me, Michelle Monteith-Hughes and Andrew Musselman, so we had a wonderful bond already. We welcomed our newest cast member, Tony Nappo, with open arms. It’s an ensemble piece, we worked together.

Did you have a favourite moment in the production?
Yes. But I’m not telling.

Butcher was part of a new producing model at the Theatre Centre that bundled three productions in one ticket price. Did you happen to see either of the other productions in The November Ticket?
I saw them both. They blew me away. I was impressed and disturbed by the ensemble work in We are Proud to Present…, there are numerous images which stay in my mind from that production. Late Company I saw in rehearsal, we finished playing Butcher before they opened. That was such a beautiful production, so heartfelt. The actors were amazing! Jordan Tannahill is a powerhouse!

What’s your favourite role you’ve ever performed?
Josef from Butcher is up there. So is Alexander from No Great Mischief, which I had the privilege to perform twice. Glenn Gould for Glenn, which I also performed in two productions (although I played two different Glenns) and Ivan Turgenev in Pauline and Turgenev. And, if you ask me, it’s also [whatever] part that I’m doing at the time!

Do you have a dream role you’d like to play one day?
Not really. Maybe Lear. But every part is a challenge and a dream.

What are you working on now or next?
Right now I’m stepping into the NAC production of Twelfth Night in the role of Malvolio, doing the last two weeks of the run. Next up is a production of Butcher at GCTC with my son Jonathan playing Hamilton Barnes, the lawyer. I’m really looking forward to working with him. In the fall I’m directing The Extremely Short New Play Festival in Ottawa for New Theatre of Ottawa.

Do you have anything you’d like to add?
When Butcher plays Toronto again, don’t miss it!