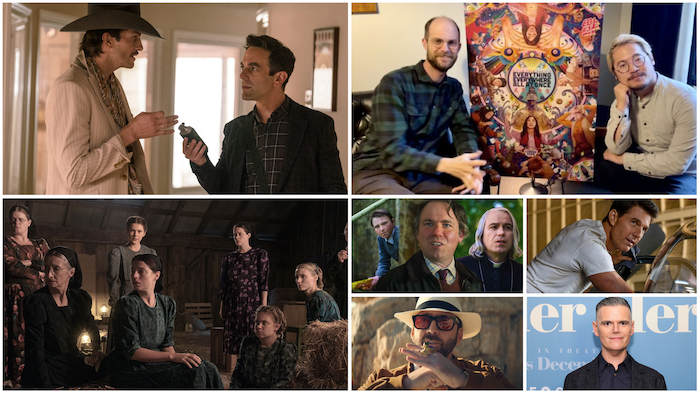 Celebrating the best of the year in film is an entertainment outlet foundational requirement. We’ve done it for years, in some way or other, by ranking every film we saw and/or by attempting to distill the landscape into some set of recognizable award categories that reflected what we truly loved rather than just what caught the Academy’s attention. But this year we simply didn’t see enough films that felt award-worthy, and we certainly didn’t see enough to bother ranking them. It was a quiet year in film, at least for us, with a few standouts but generally not that much to talk about.

So we’re launching our first ever Critics’ Pick Entertainers of the Year. No categories, no competition, just a small nod of appreciation so that we’re still on the record about our favourites, even without formal awards and lists. Though, for the record, if we were doing awards, Ashton Kutcher would win Best Supporting Actor.

Without further ado, our Entertainers of the Year for 2022 in film:

My favourite movie of 2022 by a very large margin was Vengeance, written and directed by one of my low-key favourite people BJ Novak. A brilliant black comedy about the opioid epidemic, journalistic ethics, and America’s rural/urban divide, Vengeance is as thoughtfully nuanced as it is savagely funny. It’s also perfectly cast, which is in my opinion the best thing a film can be. To be clear, perfect casting is not about simply luring the generally accepted “best” actors to your script, it’s about pairing the right person with the right role in a way that will unlock extra-textual impact and bring out the best in the performer and the script. Ashton Kutcher’s non-threatening familiarity, easy charm, and consistently underestimated depths elevate his role in Vengeance to one of the year’s best performances. As the only liberal millennial who actually watched The Ranch (it’s not for you but it’s absolutely not without merit), I’ve long maintained that we’re undervaluing Kutcher but I didn’t realize by how much. Luckily, BJ Novak did.

The Ensemble of Women Talking

This gorgeous human-focused film features a knockout cast almost entirely made up of women (plus one Ben Whishaw!) and genuinely all they do is talk. There’s very little action in the traditional sense and the single location filled with thrilling speeches and tour de force emotion makes the film feel like the most intimate and immediate of live theatre. Not a single cast member has ever been better than they are here under the careful direction of Sarah Polley.

My favourite surprise of 2022 was The Unbearable Weight of Massive Talent, a wild action/comedy I agreed to see on a whim and have thought about at least once a month ever since. The whole film (including an A+ turn from Pedro Pascal) is a big-hearted and ambitious gonzo thrill ride but it’s Nicolas Cage’s central performance that holds it all together. Playing a version of himself, the world’s most confusing actor brilliantly showcases the whiplash of performance quality and style that has made his reputation so inscrutable. He’s the best and worst actor you’ve ever seen, clueless and tasteless and self-aware and discerning and over-the-top and so subtle you don’t dare blink. What a ride.

Spoiler Alert is at once the best rom-com since The Big Sick and the most heartbreaking drama of the year. It’s delicate yet acerbic, observational and honest but never cynical. It also has a soft spot in my heart because its leading man Michael Ausielllo is a TV reporter who sees the world and therefore expresses his emotions through the medium he most understands, which happens to be the medium I most understand. Ausiello’s story (adapted from his memoir) is complicated and beautiful and made all the more impactful because I was paying attention to Michael Ausiello at the time when this was all happening to him and had no idea, so the film has an extra layer of vital reminder that there’s so much more to every moment than any one observer can comprehend. David Marshall Grant and Dan Savage did incredible justice to the story in translating it for the screen. It’s a great film anchored by great writing about a writer.

Rory Kinnear is maybe the best actor whose name most people don’t know. A celebrated stage actor whose normal guy face and understated manner have led him to far too many onscreen bureaucrats, Kinnear is often remembered as that guy you thought was really good in that thing but didn’t bother to look him up. But if you saw Alex Garland’s wild horror drama Men (which not that many people did), at a certain point you’ve got to just Google him. Kinnear plays nearly every character in the film. He’s helped along by a little CG and an ace hair & makeup team but he’s magic all on his own, playing a whole host of excellently differentiated characters without reducing any to caricature. It’s a strange film with a mystifying third act but it’s a marvel of a performance from Kinnear.

The sheer creativity of Everything Everywhere All At Once is enough to justify how completely it monopolized the film conversation in my social circle for months. The film’s muchness is glorious but it’s the quiet humanity and complex, relatable relationships at its heart that keeps the mesmerizing whirligig in place. It’s a directorial masterpiece built on a solid foundation of imagination and honest writing, a true auteur turn from The Daniels.