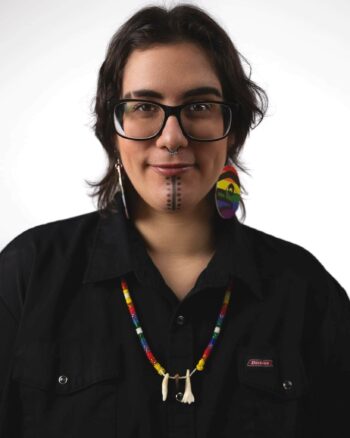 “Gabe Calderon (they/them & kiin/wiin) is a two spirit, trans-non binary and queer white settler with Indigenous ancestry. They originate from Omawinini Anishinabeg aki (Ottawa) and currently thrive in Treaty 6-Amiskwaciwaskahikan (Edmonton). Gabe shared the Lambda Literary Award for LGBTQ+ Anthologies in 2021 as a contributor to the Indigiqueer speculative fiction anthology Love after the End. Magodiz is their first novel.”

I have been writing poetry and fanfiction, short stories and novellas since I was in elementary school. I have always wanted to write and share stories and believe that storytelling is my gift and role to carry in this lifetime.

Honestly no, I was published in some children’s poetry book when I was eight, but I had dozens upon dozens of journals and stacks of lined paper filled with stories from as early as six or seven. I think as soon as I learned to write sentences I started writing stories.

I read. ALOT. I read primarily fiction, but love speculative fiction, fantasy and science fiction the most and have read thousands of books and fanfiction. All this  is probably where my expansive vocabulary, world building and character development skills come from. I have also attended several writing residencies and sent samples of writing to writers in residence at universities and public libraries to improve my work through feedback and mentorship. I never took any classes or studied writing in any formal capacity.

None of what I have done wouldn’t be possible without the incredible non-binary, two-spirit, trans and queer authors, poets and storytellers that have come before me, whose stories and books have given me hope that perhaps I can do this too- Ivan Coyote, Joshua Whitehead, Xiran Jay Zhao, Billy-Ray Belcourt, Rae Spoon, Kacen Callendar, Aiden Thomas, H.E. Edgmon (just to name a few).

Oof. This is hard. I just want to write stories about people like me and not like me that aren’t usually the main characters or even existing characters in books. My whole life I never felt seen in literature, and that’s when I started writing fanfiction. In most of the books I read, the characters weren’t queer and didn’t have disAbilities. I remember how life changing it was to read books with queer and trans characters in high school, but these characters were never wielding light sabres or leading a faction of cyborgs, so I guess I would describe my work as queering science fiction.

Absolute chaos. I have no rhythm or technique, I play extremely loud lyricless video game music, have about six different drinks (diet pepsi, water, coffee, juice and a milkshake or smoothie) around me and write with hyperfocus for hours on end…and then no writing for weeks and weeks, until there is a deadline, then repeat the chaotic process but as an all nighter to make the deadline in time.

I usually dream of scenes or characters so I sleep with my phone and type things out all crooked in the middle of the night, or open the voice memo app and record a sleepy half-sense-making of my dream that I will try to filter through in the following weeks and incorporate into whatever poem, short story  or novel I’m working on.  I have over two hundred half-written poems on my phone and dozens of stories in progress on my laptop. Even if most of these will never be read by others, writing is how I process my world. In that sense, I guess I am constantly existing in a form of a writing process or another.

I started writing Màgòdiz over ten years ago. Originally, I wanted it to be a webcomic, but after several setbacks, I decided to write it as a novel. Màgòdiz is my understanding that as Indigenous peoples we are already living in a post-apocalyptic or post-colonial world. Currently, its Indigenous peoples, across the globe that are on the front lines, defending land and protecting waters from climate change and other colonial/capitalistic issues, so that all of humanity’s future generations can thrive. I had dreams for many years of all the efforts of sustainability and climate action failing. So I thought even if that fails, even if all the water dries up and all the trees and the plants and the animals die out, even then, Indigenous ways of being would still prevail.

I honestly thought no one would want to read about these weird characters trying to survive the post-apocalypse by finding family and falling in love and since the world had ended why not implode the gender binary and cisheteropatriarchy while we’re at it! Fortunately my epic partner encouraged me to submit the first few chapters to the Love After the End Indigenous 2SLGBTQ+ speculative fiction anthology call for submissions and to my utter surprise it was accepted. This made me think maybe people do want to read these stories? So I spent the next few years finishing the manuscript and feeling like Bèl and A’tugwewinu and Riordan were right next to me, bantering and cheering me on.

I wanted to write about people finding love and family and beauty and joy in an impossible, bleak and desolate world, because it’s so vital that we can see ourselves thriving against all odds. As misfits, oppressed folks, people forced into the margins, we survive the systems that oppress us, we laugh in the face of misery and we create and remake spaces of strength and beauty and joy within our communities- so what’s a constant grey orange sky and destroyed cities compared to colonialism and capitalism?

What are you working on now/next?
More sci-fi! I’m working on a generation ship genre where the earth is gone and humans divide into sects with various goals- some to colonize inhabited planets others to terraform planets without life forms, some building treaties and establishing trade with one another. With Màgòdiz, I really relied on the characters to develop the story, but with this new book, I really want to create an entire universe and take sci-fi in a direction I haven’t seen before.