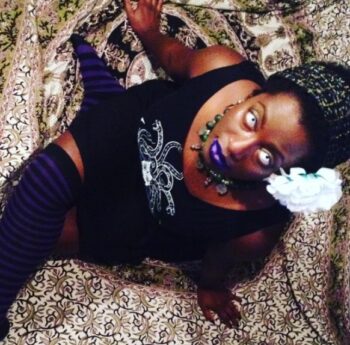 “Sifton Tracey Anipare is a Ghanaian Canadian writer who lived and taught in Japan for four years. She loves video games, bubble tea, and Japanese coffee mixes, and is an avid collector of stickers and stamps. Yume is her first novel.”

Definitely before I was old enough to know I could be a writer. I was always making up weird stories as a kid, even when I was just learning how to write and daydreaming about people reading my weird stories someday and saying “wow, I never thought about stuff like this – I’d like to read more.” But I guess the defining moment of wanting to be a professional writer happened sometime in high school, when I was reading a series of a particular author who wrote beautifully but was also a huge fan of the “magical BIPOC” (not the official name) trope. When I read one story about an “almost-invisible” Black person emerging from darkness to warn white characters they were in danger, I was like “done” and I remember vowing to write something better. And by something better, I guess I meant anything better.

No, but I did come across one of my earliest writing pieces recently. It mentions my first trip to Ghana, so I was nine when I wrote it. At its core, it’s basically a Peter Pan fanfic. We don’t have to talk about it.

I don’t know if I can say I have developed my skills. I have never formally studied creative writing, and I’ve never done a full-fledged writing class. I think I’ve taken about four writing workshops my whole life, two of them being within the last few years (long after I started working on Yume). Up until now, all of my writing has just been “replaying” the movies in my head that are my stories, jotting them down on paper, and hoping they’re interpretable when others read whatever I’ve written. So, I still have skills to develop, but I’ll get there. I’m learning, friends!

Most of my influences actually come from movies and directors: Tim Burton for sure, a couple of films by Federico Fellini and Wong Kar-Wai, a handful of avant garde films I stumbled on in my pre-teen years and of course, I consider Hayao Miyazaki to be a big deal. I’m also REALLY into Jordan Peele movies right now. (Can’t wait to see more from him!) I didn’t read a lot of popular stuff growing up, except for maybe The Babysitters’ Club series and several Choose your own Adventure books (I got way too deep into those things). I don’t think I read any “classics” until I was forced to in high school. But one of my favourite books is definitely Alice’s Adventures in Wonderland. Whenever I hear about any spin-offs, I have to check them out and I have yet to be disappointed. Some of my favourite authors include Octavia Butler, Neil Gaiman, Holly Black, Francesca Lia Block, and Haruki Murakami. I also loved the Lemony Snicket series. So yeah, many influences, very few of them literary in nature.

This is a hard one… “Unconventional,” maybe? “Different?” But the “good” kind of different? I’m not sure. I do know that if you like stories about things or situations that are strange and unusual but occur in plain sight, mine will be up your alley – hopefully!

2) Write down whatever’s playing on the screen in my head, usually using a Pomodoro timer

3) Hope it (eventually ^_^”) makes sense to someone, somehow

Yume (夢) is an urban fantasy about a young woman teaching English in Japan who slowly tumbles down a deep, dark rabbit-hole of culture shock, and her story is mixed in with dream and (Japanese) demon mythology. It’s a story for anime otaku, foodies, and anyone who knows what it’s like to feel like a misfit. It gets very weird and dark, but there’s hope and humour sprinkled in here and there, too. And it seems to make a lot of people hungry when they’re reading so I suggest preparing some snacks.

There is a prequel / spin-off I started the year after starting Yume. It was intended to be a crossover between faerie tale-fable and film noir. It needs so much work though. I’m not entirely sure how to bring it up to my standards, but I also don’t want to scrap it completely. It has so much potential, and I’m so fond of one major plot twist that I’d love to let Yume fans see it before deleting the whole thing and pretending it never existed. I’ll see what I can do with it. Wish me luck!