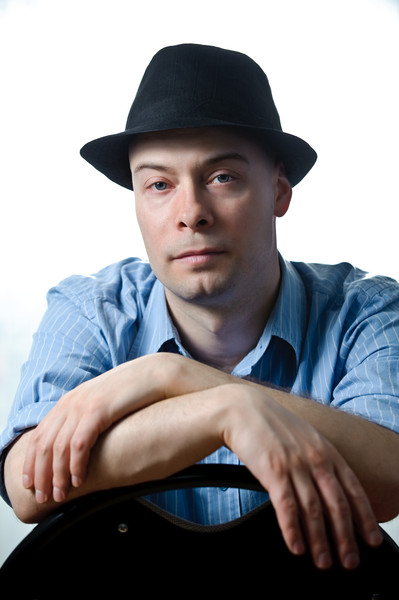 “Jeff Cottrill is a fiction writer, poet, journalist and spoken-word artist based in Toronto, Canada. He has headlined in countless literary series throughout Canada, the U.K., the U.S., France and Ireland over the last twenty years. His performance style is influenced by slam conventions, but subverts them with wit, ironic humour and a satirical tone.

Throughout the COVID-19 pandemic, Jeff has continued his spoken-word career via Zoom, which has allowed him to attend literary events in Australia, New Zealand, Singapore, Lebanon and other new places. In 2021, he has had poetry and flash fiction published in several international anthologies, including Paper Teller Diorama (New York), Sinew: Ten Years of Poetry in the Brew (Nashville), Globalisation: The Sphere Keeps Spinning (Sydney, Australia) and Things Fall Apart: Mischievous Machines (Leeds, U.K.). Other short fiction and poems by him have appeared in The South Shore Review and The Dreaming Machine. Jeff has also been featured in the poetry podcasts Wordsmith (Australia) and Poets and Muses (U.S.) this year.

Jeff’s journalistic credits include OHS Canada, Toronto.com, NOW, EYE WEEKLY, Exclaim!, Post City Magazines, YellowPages.ca, Divorce Magazine, JobPostings and Digital Journal. In 2015, he was nominated for a Kenneth R. Wilson Memorial Award for his OHS Canada article “Off the Rails.” He holds a Master of Arts degree in English from the University of Toronto, as well as a certificate in creative writing from Humber College. Jeff is the former Literary Editor of Burning Effigy Press. Hate Story is Jeff’s seventh or eighth attempt at a novel and the first actually completed.”

When I was very young. I wrote lots of silly poems and stories in elementary school, probably as early as Grade 1 – sometimes for class, sometimes for fun. Reading books by Judy Blume and Roald Dahl, and others, had a strong effect on me; I wanted to do what they were doing. It wasn’t until late high school that I really became serious about writing, though.

Not any one specific thing. I remember writing a lot of stories that were just straight ripoffs of Wayne & Shuster sketches (before I was old enough to understand most of the jokes). And there was a long, weird poem about Charlie Brown studying at Knox College or something.

As with any other skill, it takes practice to get better. The more you do it, the more natural it gets. I wrote tons of stories and poems in my late teens and early twenties, most of which were crap, but all of which helped to make writing a regular routine for me. Working in journalism and editing has done the same. Another important factor is to read a lot, partly for enjoyment, but also to see how better, more established writers do it. I read books in a variety of styles – fiction, poetry, plays, biographical nonfiction, humour – as I believe you can learn from anything, even unconsciously.

I’ve also tried improving my ability through writing workshops, both the free-writing and the “critical” kind. The latter has often backfired, particularly when participants are more interested in lobbing personal attacks than giving constructive feedback. But the Humber School for Writers (both the summer workshop and the certificate program) boosted my confidence in recent years.

My favourite novel of all time is Great Expectations (though I’ve been savagely mocked for it, since many people find Dickens’ expansive prose style to be unreadable and archaic these days). Kurt Vonnegut is another heavy influence; I must have read Mother Night dozens of times by now. Other favourites include Catcher in the Rye and John Steinbeck. I’ve learned a lot about irony and voice from great satirists like Mark Twain, George Orwell, Jonathan Swift, Alexander Pope, Voltaire, Douglas Adams, even Jane Austen a little. And if I’m permitted to stretch outside literature, I’m also influenced a lot by sketch comedy and stuff like The Simpsons, while cinema and theatre have taught me much about how to write realistic, credible dialogue.

Almost everything I write has some satirical and/or comedic bent to it. (I feel as if I didn’t really choose it; it chose me.) I’ve focused mostly on spoken word since about 2000, and many of my performance poems come off more as comedic monologues than as “proper” literary poetry. As a result, people sometimes mistake me for a bad stand-up comic. But that hasn’t stopped me from earning a small international audience, both on tour and on Zoom.

I started getting serious about fiction again four years ago, and since then, I’ve written many short stories with a dark or quirky sense of humour. Sometimes they play like reworked comedy sketches, sometimes not so much. I tend to gravitate towards taboo or controversial themes and issues, which is often a disadvantage when trying to get published or read or just taken seriously. But somebody’s got to write about those things.

With fiction, I just try to get everything down on the page on the first draft, without worrying too much about how “good” it is or about continuity errors. It’s okay to make mistakes on the first draft, or at least, it should be. And if I like what I’ve come up with, I start editing it ruthlessly on a fresh reading later on. Editing seems to be a never-ending process – I’m always finding things I want to cut or clarify or change, even after the hundredth reading.

With poetry and spoken word, on the other hand, I sometimes end up writing pieces in my head, at least in rough draft, before I get anywhere near a notebook or a word processor. I don’t usually write with performance in mind; everything is for the page first, and then I develop it for performance if it suits the piece. And I often use audience reaction to gauge how to edit the poem – if a line didn’t get the laugh I hoped for, or if a line went too far.

Hate Story is my debut novel, which came out in March. It’s an offbeat mix of satire and mystery that explores the aftermath of a riot at a funeral. Jackie Roberts, a movie-obsessed aspiring journalist, is tasked with investigating a recently deceased loner named Paul Shoreditch, and she explores a mysterious website through which anonymous posters have been sullying Paul’s name for years. What did Paul do to these people? As she interviews folks who knew Paul and learns about his unusual life, Jackie begins to question her own social-media conduct and other beliefs. The book satirizes the disturbing modern trend of online shaming and mobbing, among other things.

I should be working on my second novel, and I’ve had a couple of false starts on new projects in the last year or two. Hopefully I’ll get back to one of them and it will work out better, though having a day job is always a barrier. I’d also like to publish a short-story collection at some point. For now, I’m focused on trying to get the word out about Hate Story, while also accepting any spoken-word gigs and opportunities that come along.