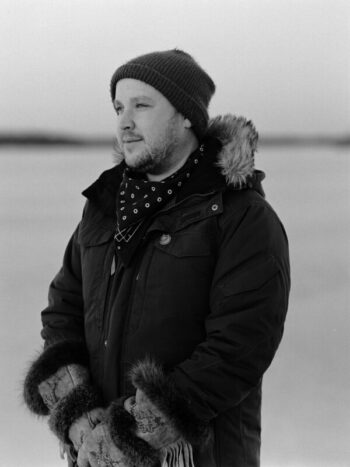 “Conor Kerr is a Métis Ukrainian writer. A member of the Métis Nation of Alberta, he is a descendant of the Lac Ste. Anne Métis and the Papaschase Cree Nation. His Ukrainian family are settlers in Treaty Four and Six territories in Saskatchewan. In 2020 he received The Fiddlehead‘s Ralph Gustafson Poetry Prize and in 2021 was awarded The Malahat Review‘s Long Poem Prize. His work has been anthologized in Best Canadian Poetry 2020 and Best Canadian Stories 2020 and published in literary magazines across Canada. He is the author of the poetry collection An Explosion of Feathers and the novel Avenue of Champions, which was shortlisted for the Amazon First Novel Award and won a 2022 ReLit Award. His poetry collection Old Gods is forthcoming with Nightwood Editions in 2023″.

When did you know you wanted to be a writer?
I’ve been writing since I can remember. I used to get all my Lego men together, and I’d write stories that detailed out there movements and the world that they occupied and lived in. These stories were complete with heroes and villains and quests, all the good things that a five/six-year-old wants to create within a world. I’ve continued that practice for most of my life barring a few years in my early twenties when I focused on my “career.” But it’s always been in the back of my head that this is something that I’m going to do. No one in my life is surprised about the books that are out and coming out. I get messages from friends from high school/university who congratulate me and refer back to conversations we had when we were young and drunk and the world still seemed bright and I told them that my dream life was to be a writer. Now it’s happening in a big way.

Do you remember the first thing you ever wrote?
Those same Lego stories. To be fair, I don’t remember them but my Grandma kept them and I recently revisited them. The one is like fifty pages long and really not that bad. I’ve read worse stories in MFA workshops. I do remember being accused of plagiarism when I was nine or ten and a teacher at my elementary school just lost her mind on me. I had written down an old Metis story that my Grandma had told me. She thought I stole it and instead of being a good educator and asking questions, she told me that I should never write again (this shit is common with white teachers approaching Indigenous kids). That didn’t stop me from continuing to write though. I carry a lot of anger with me so I hope that she quit teaching soon after that so she didn’t ruin any other kids lives. Loser.

How did you develop your skills?
I’ve always had a bit of a knack for voice, but things really came together for me in my mid-twenties when I went back to University to upgrade courses to apply for the Master of Fine Arts, Creative Writing program at the University of British Columbia. The biggest thing that came out of this time period was a focus on discipline and daily practice. Before that, I’d call myself a writer, but I’d maybe crank out a half-assed poem or short story every year. Not a sustained product and not sustained enough to start really developing a unique voice, practice, and an ability to work within words. The workshops in the MFA practice were hit and miss but the necessity to have a daily writing practice really stuck with me and continues to do so to this day. It’s so easy to just say, “ahh I’ll write it tomorow.”

Who are some of your biggest literary influences? Do you have a favourite book/author?
When I was younger I leaned towards the work that we read in our English Lit courses at the University of Alberta. AKA All The Old White Dead Men, Hemingway, Steinbeck, Cohen, Harrison, Carver, etc., and on and on and on. Some of them are better than others. Some of them have aged better than others too. This was what was presented to me and I ate that shit up. As I got older and realized that the world, and especially my world as a Metis person isn’t necessarily defined by the thought process of these men who have had literally everything handed to them I switched it up and started reading more Indigenous writers. The first person who blew my mind was Thomas King. I couldn’t believe that someone could write books in the same voice that my friends and family talked in. Then others such as Katherine Vermette, Cherie Dimaline, Heather O’Neill, Norma Dunning, Colson Whitehead, Billy-Ray Belcourt, jaye simpson, Jas Morgan, showed me that voice and story can be so much more than what is talked about in a 200/300 level University class.

How would you describe your work?
Amazing….. Nah I’m a big fan of the write the exact way you would tell a story to your friend at a party or the bar and then edit it up later. So I tend to have a bit of a ridiculous voice. I usually don’t describe narrative details that often and instead let the characters actions/dialogue do that for them. I try to write humor, I make bad jokes, I tell stories that actually happen. But I try and build in a bit of that magic that lives within a Metis worldview as well. So that people can get drawn in by a gritty inner city world in northern Alberta and then see the love that community has even with colonial violence being smashed into the characters on a regular basis.

What’s your writing process like?
I wrote my first novel Avenue of Champions over the course of a couple years during my MFA. The novel is just my thesis with a couple edits. What I tend to do now though is hop into the bath. I got this great tray that goes over the bathtub and I have a shitty iPad that I don’t care if it hits the water at some point. Hasn’t yet. I tend to try and get anywhere from 1500-2000 words down a day. Most of them suck but some are usable. The practice really gets me into the story, though. Eventually, I get to a point where I’m running with it and I’ll write up to 4000 words a day but that’s usually when the bookend is in sight.

I do hate rewriting and I hate editing. I’ll do it but it’s not my favourite thing.

Tell us about your most recent book.
The book follows a family that was displaced from the lands that they had called home forever when the reserve that they were forced onto in the Treaty making process was illegally taken over by the Canadian government. The family ends up in the bush and the Granny makes a living selling moonshine. Eventually, the family ends up back in the city and the book situates around an Indigenous neighbourhood. It follows two main characters, Daniel, a whiny little university brat and his grandmother, a badass Metis lady who switches from making moonshine to selling weed brownies to finance her move to Vancouver Island. Daniel grapples with being the first person in his family to go through university and then work a government job. There’s violence, there’s humour, there’s love and caring and community and the odd 69 joke.

What are you working on now/next?
I’ve got a new poetry collection coming out in Spring 2023. It’s titled Old Gods and it’s really carried by a long poem that won The Malahat Review’s 2021 Long Poem Contest. It’s about Metis road networks and the stories that are carried through generations on them, and the love of a landscape.

I’ve also got a new novel coming out in Spring 2024 titled Prairie Edge. It centres around two Metis characters who get fed up with the current protest movements and lack of action/capitalist takeover of ideas and decide to steal a whole herd of bison and release them in the middle of an urban city. Then shit goes south and it follows the two as they deal with that and pulls in Metis oral storytelling traditions, humour, the balance of intergenerational trauma and healing and a return to what post-colonialism can really look like as the characters figure out their own decolonization processes. It’s funny. The main character makes a living stealing catalytic convertors, which is something that is a common occurrence up here in the north. That alone is worth a book.