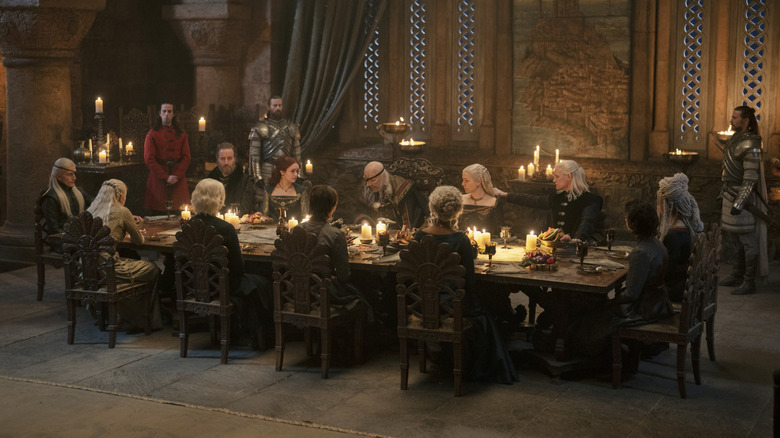 House of the Dragon, Ep. 8 “The Lord of the Tides”

I really want to make a ‘family’ joke (a la Fast and the Furious) about this week’s episode, but I’m coming up empty. Oh well! On to talking about the six year time jump, one of the last for the first season!

Rumor has it this is the last/one of the last time jumps for House of the Dragon. And honestly, that tracks. We’ve said it this whole season long, so much of every episode is just laying groundwork for the greater conflict ahead. War is inevitable – the greens and the blacks hate each other too intensely for that not to be the case. “The Lord of the Tides” ends with a moment that tries to showcase the warmth around the table – cousins dancing with each other, Rhaenyra and Alicent cracking slow smiles at each other, Viserys making his heartfelt speech. The showrunners, after the credits, try to make it clear that the potential for filial bonds to triumph over pettiness and pride exists, that there is happiness and joy in this family as much as there is bitterness.

But we know better. House of the Dragon is a Game of Thrones show, and we’ve come to expect the worst when we see even a glimmer of happiness or hope. And the episode does not disappoint! The children tear into each other, verbally and otherwise. To me, it’s the saddest part about the whole business – they have inherited a fight they feel strongly about, even if they do not yet grasp its full complexity.

Where I find redemption is that both sides of the youthful fracas have troublemakers. Jace and Lucerys are both quick-tempered hotheads, and it didn’t help when Jace decided to dance with Helaena. And yes, Aegon gave him cause to, acting up and casting aspersions in front of Jace’s cousin/fiance, Baela. Aemund is every vigilant, even with one eye, but also lets his temper get the best of him when the roast pig is served. Too much has happened over the course of these young people’s lives to allow them to act civilly or at least, hold their tongues.

If you’re looking at the last paragraph and scratching your head, trust me, I am too. There are so many new names and faces to keep track of. It feels like HBO is turning actors into adjuncts – let’s see how many episodes these folks stick around for, because their predecessors were not long for the stage on House of the Dragon. Plus, Rhaenyra and Daemon just had two more babies, whose names I’m not going to bother looking up (please forgive me, there are just so many children). If all of these kids get dragons eventually, too, it’s going to double the name count.

But the show keeps killing people off to try to balance it out. Corlys is out of the picture, recuperating from his illness (although there are plenty of rumors he may not be coming back), and now his brother Vaemond is dead. I’m a bit sad, I really love seeing these black actors with silver hair, it’s a very striking and cool look. More importantly, it keeps nudging the show in a less-diverse direction. Without any ethnically-ambiguous Dornish folk, we’re down to Baela and Rhaena, the biracial children of Laena and Daemon, the maester who sits on the Small Council, and Lady Mysaria, as far as the main cast goes. I’ve said it before and you’ll hear it again, Western fantasy continues to have a problem with people of color. Even my current favorite show, The Rings of Power, is struggling in certain regards (sorry, Arondir is wonderful but I need more).

The end of the first season of House of the Dragon is coming, friends. Let’s see where we jump to in time, how many new character flashcards we need to make, and how much more of this weird incest family tree we can stomach.