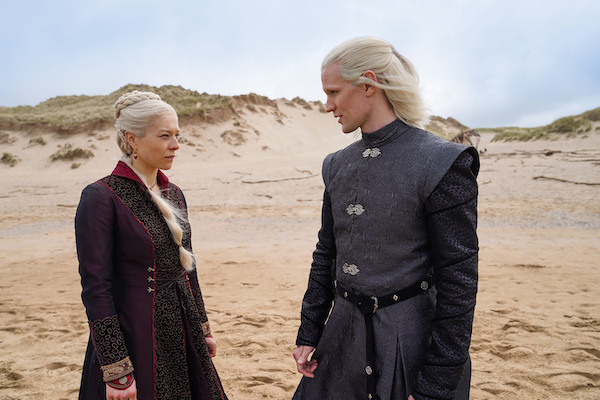 House of the Dragon, Ep. 7 “Driftmark”

I’m a big fan of funeral episodes. Grief is a complicated emotion – more than one emotion, even. Grief is so often mixed with joy, laughter, pain, confusion and a thousand other feelings. It makes for complicated character work, significant acting challenges, and unique opportunities for visual perspectives. Beyond that, the ritual aspect of various funerals present the viewer with timed, regular beats for a narrative to follow. A rise in action with one person’s eulogy, a settling of tension at a wake buffet – there are as many narrative currents in a funeral episode as there are in any river.

“Driftmark” is special, because Laena Valeryon’s funeral was the first scene shot for House of the Dragon with the new cast. It is a complicated, forty-person scene, where cameras are tracking main characters looking at each other, casting glances downward, seaward, dragonward, etc. It’s also a wonderful way to introduce actors to one another – funerals are awkward, emotional places, and a funeral among royal intrigue and drama means some emotions must be curtailed, others manipulated. Learning how to navigate these awkward spaces makes for spectacular awkward acting, but also lays the foundation for stronger character development in the rest of the show.

And boy, does it get awkward. Laenor is standing hip-deep in icy seawater, mourning his sister. Daemon lets out a high-pitched chuckle during Vaemond Velaryon’s funeral rites. Corlys tries to cheer up his grandson by informing him he now stands to inherit his recently-deceased aunt’s claim to Driftmark. Viserys tries to reconcile things with Daemon, as he sees his own death in the wings. His son, Aegon, gets drunk and chases after the servers.

And all this happens just during the funeral. Though I suppose you can’t really call Aemund claiming Vhagar as his mount or Alicent’s confrontation with Rhaenyra “awkward.” It’s just more complicated than that. Aemund is turning from a sulky little boy to a sullen and proud bully. Alicent’s bottled up emotions all burst, drawing the line clearly, for all to see, between what the internet is calling “the greens and the blacks” (those aligned with the Queen, of House Hightower, and those aligned with Rhaenyra, and some of the Targaryens). When Alicent first put on the green dress, we saw it as a finger pointed at Rhaenyra, an indication that she knew the truth about her.

Now, we see the finger turn to a dagger. No longer an intimate secret between them, but a declaration of hostilities. Both sides are shoring up assets – Alicent with her son and Vhagar, Rhaenyra with Daemon and Caraxes – and continue to set the stage for the larger conflicts ahead. This funeral may be the last time we see all parties assembled peacefully. And I definitely think the peace between the youngest involved, the children, is forever shattered. Jace, Baela, Aemund, Aegon – all are chained to their parents, their houses and the struggle for the throne. The only one who looks like he might escape all this is the freshly-shaved Laenor Velaryon, on a rowboat with Ser Qarl.

Let’s see if he stays rowing for as long as Gendry did.