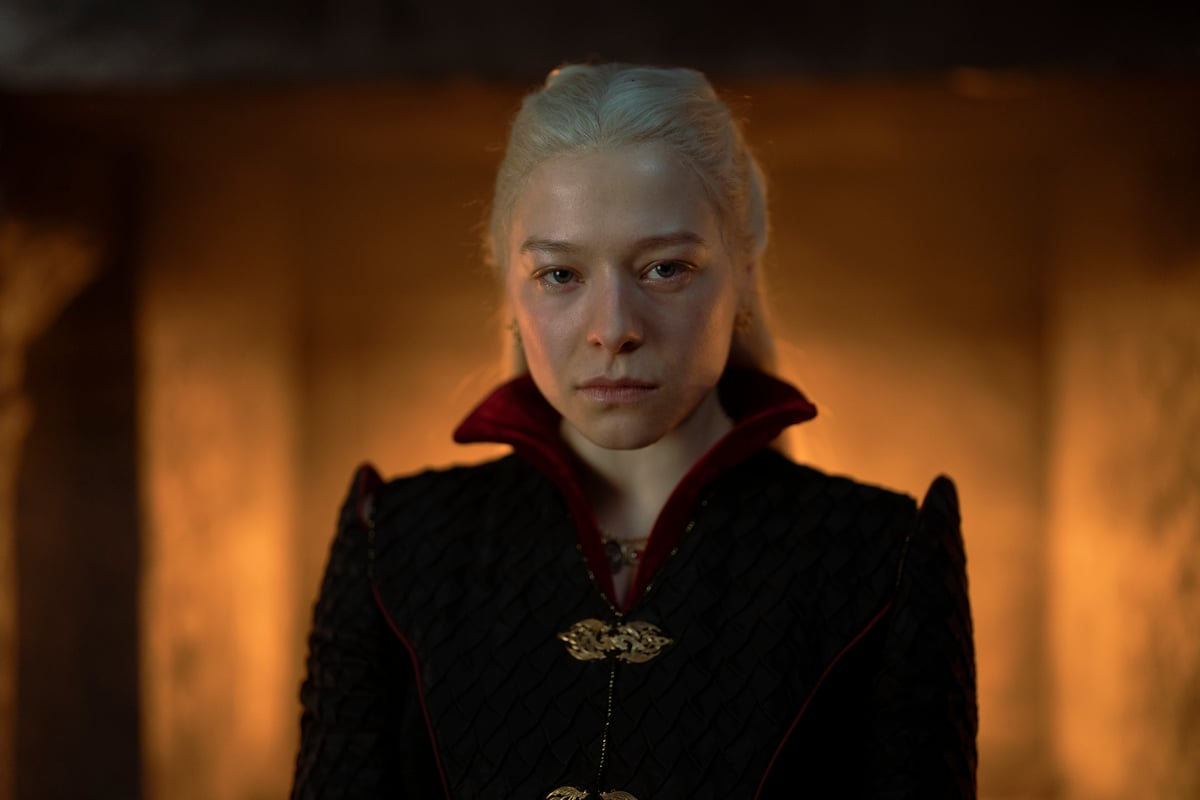 What a way to end the first season! Whether he meant to or not, Aemund has plunged the Blacks and the Greens into war. Lucerys is dead (although you know what they say, if you didn’t see the body…), Arrax is chomped, and the first season of House of the Dragon is over.

There are many thoughts, many memes, and many positions to take for the finale and for the season as a whole. This has been a show many of us have been struggling to understand. We have sat through birth trauma after birth trauma, cringe after cringe, time jump after time jump. We have seen actors change and tensions escalate. But ultimately, what I want to write about are the women of House of the Dragon.

This show is, I think, centered around women. So many of the first season’s episodes were directed and produced by woemn. Rhaenyra and Alicent’s relationship (or lack thereof) is the heart of the series. And now, in episode ten, there is a Green Dowager Queen and a Black Queen, separated by a distance only dragons, ravens and ships can cross. In the wake of Otto Hightower’s visit to Dragonstone, war is what the Black council is preparing for, shoring up allies and shouting at each other over that big beautiful table. Rhaenyra is dealing with the death of her father, the stillbirth of her child, the burden of queenhood, and finally, the betrayal of her friend.

In episode eight, there is a nod towards potential resolution between the two of them. At Viserys’ table, there is a brief moment where we all hold our breath, where the two women smile at each other. And then all hell breaks loose between the children, and that’s it – no more reconciliation, only the threat of war. But it’s that pause, that space between Rhaenyra and Alicent, that we remember. Two mothers, their children, a family setting before a storm breaks loose, that’s the climactic moment of that episode.

As much as I struggled with the multiple birth scenes in House of the Dragon, I definitely recognize that they have a purpose. The current moment in the world revolves around bodily autonomy, discussions around conception and the like, as I wrote in my first review. Women’s rights are human rights. In the tenth episode, birth becomes about chaos, pain and power. Chaos, because moments before Rhaenyra goes into premature labor, she learns of her father’s death, Alicent’s betrayal and the usurping of her throne. Pain, both emotional and physical, as she goes through a stillbirth while grieving. Power, because Rhaenyra is the Black queen, and the cutaways to the dragons beneath her palace highlight what she said earlier this season – everything the Targaryens have, they owe to the power of fire.

But as the episode develops, it redefines power multiple times. Rhaenyra clashes with Daemon over whether or not to go to war. Her steadfast desire for peace and prosperity inspires Rhaenys, who commits her husband, house, fleet and dragon to the Black cause. The interplay between the two women really comes together in this episode. Rhaenys still blames Rhaenyra for the death of her son, Laenor, as does Corlys, but she seethes at the Greens’ treatment of her and suspects their complicity in her brother’s death. She recognizes the needs of the moment, certainly, but what the show draws our gaze to is how she sees Rhaenyra as the only one in a position of power who is interested in keeping war at bay. In many ways, it’s a smaller callback to Milly Alcock as young Rhaenyra, returning victorious and bloodied from her encounter with the boar. She is an inspiring sight to young nobles and lords at the royal hunt, as she shows the bloody side of royalty. Now, she inspires House Velaryon, all too familiar with death and loss, by fighting every urging for bloodshed.

The real tragedy of the finale is Rhaenyra, learning of her son’s death. In the post-show analysis, the producers say this scene is about uncovering new grief, that even in the face of all she’s gone through, Lucerys’ death uncovers a pain she could not have imagined. All credit where it’s due, Emma D’Arcy delivers a stunning performance in this episode, and the slow turn, the small look of madness in her eyes, is masterful. It really puts us in mind of what they kept saying in Game of Thrones, “every time a Targaryen is born, the gods flip a coin.” We still have yet to see where her coin will land, but the suspense should make for sufficient hype as we await the second season.

First seasons are rarely perfect. They are fraught with difficulties, learning curves, and production timelines. We’ve definitely seen House of the Dragon go through its growing pains, but the three seasons we’ve yet to see are, I think, going to shape up to be some of the most exciting television we’ll get this decade. With regard to women, the show struggled at first with telling their stories. But the inciting incident at the start, the council at Harrenhal’s decision to pick Viserys over Rhaenys, has remained a true and constant thread for the series. The question of who can take power, which gender the Realm will favor for the throne, all remains compelling to the audience. Many of the fans know how the story ends, but House of the Dragon is the real proof that it’s about the journey, not the destination. A fitting message, I think, for a finale.