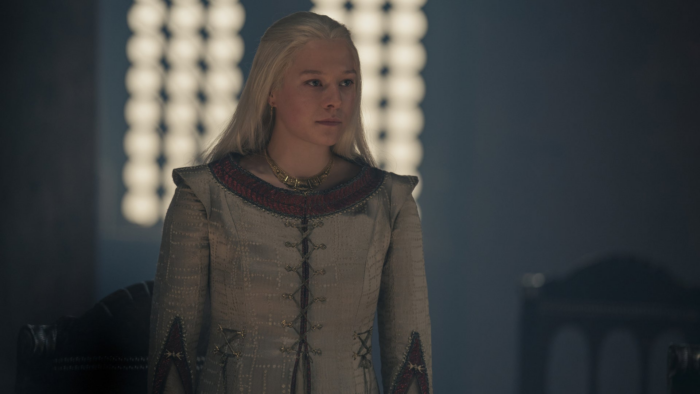 House of the Dragon, Ep. 6 “The Princess and the Queen”

Pilots are funny little things. Sometimes, in the case of shows like Firefly, they are only fully appreciated too late, when the show is cancelled and all hope for a reboot is dead and gone. In other cases, the pilot episode is inconsequential, poorly produced and altogether better forgotten – the rancid, ignoble little brother to the glroious span of seasons. Most of the time, the average person finds pilots forgettable, worth only returning to once a show has finished, as part of a rewatch or, for fans of Downton Abbey, to see the shocking distinctions in characters after such a lengthy period drama.

House of the Dragon’s sixth episode is essentially a second pilot. An almost entirely new cast, nearly double the supporting characters, and set ten years apart from the fifth episode. “The Princess and the Queen” isn’t quite a reboot, because the show is still airing weekly, and it’s not quite ‘starting over,’ since time in Westeros keeps moving forward.

It is, quite simply, beginning again.

Some of you will want to call this ‘the start of the next chapter,’ but I’d ask you to reconsider. The Targaryen drama is only just being introduced. And in style of GRRM, a chapter is densely packed with drama, intrigue and feuding. Rhaenyra is not yet at the height of her power, but she has clearly gained considerable political acumen. Alicent is more queenly than ever, but not by regal grace, but by what we understand queenliness to be in the GoT universe – bitterness, wrath, and skullduggery. The gulf between the two has not lessened, it has widened exponentially. So this isn’t another chapter, because the tension on screen is still being set up. The denouement between the two legendary women has yet to come to a head.

No, the show is beginning again. It’s not a new start, it’s the show aiming to start new things. The children of Daemon, Rhaenyra and Alicent are all going to be key parts of the wars to come, players on a stage set by their forebears. We’re introduced to their turbulent youth and meant to acknowledge them in the same way we saw young Alicent and Rhaenyra – with humor (‘the pink dread’), with revulsion (Aegon naked at the window) and with unfolding revelations (Ser Harwin’s outburst and summary dismissal). Children are, in the style of GoT, play-actors to prophecy, carrying the names of conquerors and dead men forward as they carry generational trauma and the burdens of duty. To the show, children are the vehicle to which great drama can begin again.

This second pilot gives the opportunity to hold more mirrors up. In the first episode, we witnessed the traumatic death through childbirth of Queen Aemma. In “The Princess and the Queen,” two characters give birth. The false mirror ends up being the first one – Rhaenyra is who we open with, in the midst of birthing Joffrey, her third son. It’s a startling reveal, given how much Emma d’Arcy looks like Aemma (I see what you did there, HBO). But she survives her birth, and shows her strength – foolhardily or not – climbing the stairs to the king’s tower to introduce her baby at the Queen’s request. The final birth, it turns out, ends up being the truer mirror. Laena Valeryon faces a difficult birth with a baby who refuses to exit the womb. Daemon is given the same choice as Viserys, to save the child at the cost of the mother’s life, and he recognizes just as we do that he acted poorly after his sister-in-law’s death. But Laena doesn’t let anyone decide for her. She breaks the mirror. Laena’s death is inevitable, but it is her dragon, the massive Vhagar, who ends her life, and at her order. It is an incredible moment, and the truest sign, to me, that we are making House of the Dragon begin again.

Given the time jumps, it feels uncomfortable in certain ways to be beginning again. We expect shows to move linearly, to keep us abreast of the shifting tides of drama. Without episodes between five and six, the sudden appearance of children for Rhaenyra, with no romance between her and Ser Harwin, seems hurried, even sloppy. There are pacing issues with beginning again, story details and events that the show clearly feels are unimportant, but the viewer hasn’t been given the chance to decide. Beginning again forces our hand, it makes us ask questions about that ten year gap. It draws our attentions away from the majestic storytelling we’ve come to expect from this production house and act like we’ve got whiplash.

If I had to hazard a guess, beginning again is simply a prelude to the larger acts coming. We, the audience, are being tested. We must begin again, we must watch again, as this hurried drama plays out, moving forward to make way for a larger, looming narrative. Maybe beginning again here, in episode six, is the writer’s nod to us, their way of saying “you ain’t seen nothing yet.”