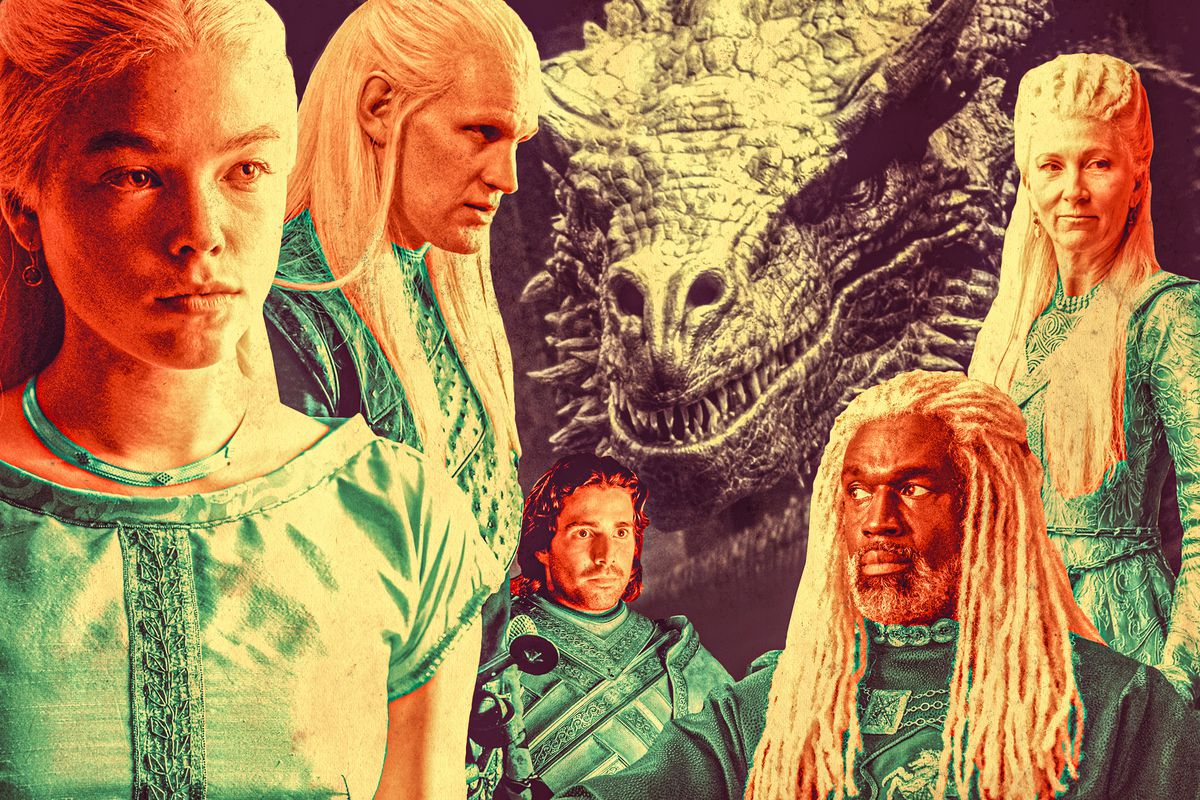 There’s nothing like a wedding in a high fantasy series. The dresses, the decor, the sumptuous feasting and above all else, the drama. House of the Dragon’s mid-season climax is the wedding of Laenor Valeryon and Rhaenyra Targaryen, and “We Light the Way” is all about setting up the friction, the agitation between characters, so that the wedding goes the way of what we expect weddings in Westeros to be – tragic, bloody, and exceedingly consequential.

Let’s start with the heir herself, the Princess Rhaenyra. Fresh from her adventures in the episode previous, she approaches her wedding with a pragmatic, progressive air. There is a definite smugness about her – the discussion of “differing tastes” between Rhaenyra and her betrothed is part of her perfect scheme. Laenor’s preferred choice of partner is sort of an open secret, and the arrangement couldn’t be more amicable for the both of them. The one fly in the ointment ends up being Ser Criston Cole, who falls for one of the classic blunders – being in love.

Corlys Valeryon, the Sea Snake and father of the groom, begins the episode from a position of strength. Lord of the wealthiest family in the Seven Kingdoms, commander of navies and dragons, still riding high from his victory in the Stepstones, he is first noted in the episode by his absence. Corlys doesn’t greet the king at his door, but rather, from his throne. Viserys and Corlys are at opposing ends – one a lord, presented as hale and crafty, the other the king, presented as ill and desperate. They have been at odds in since the first episode, but it really shows now that Corlys is in a position to bargain, and what a bargain he tries to strike! In one marriage, he tries to end the Targaryen dynasty and begin a Valeryon one. Viserys manages to outdo him, allowing for children of the union to be named Valeryon, but when they take the throne, they’ll be expected to change their name to Targaryen. Corlys accepts, and given the king’s poor health, I’m betting he’s counting on outliving Viserys and manipulating things later on down the road.

So much of House of the Dragon has been rooted in patrilineage, in the concept of male heirs and male succession. The relationship between Alicent Hightower and her father, Otto, is a great example of this discussion. In this episode, Alicent begins clinging to the belieft that Rhaenrya is her friend, and will make a good ruler. Otto begins as he always has, but gets a lot more blunt with his daughter. He says Rhaenyra’s claim to the throne will be a bloody one, and Alicent’s children will be sacrificed for it. Terrified, Alicent seeks to plumb the heartbroken Criston Cole for information, trying to learn the truth of what happened that night with Daemon. Instead, she discovers more than she bargained for, and wears the Hightower colors to the wedding to show where her allegiances lie – with her family, and with the truth she is now burdened with knowing.

King Viserys isn’t spared any share of misery, either. Much of the internet has been comparing the king’s journey throughout the season to the meme of exhausted Ben Affleck, smoking a cigarette. Part of that has to do with Paddy Considine’s considerable acting ability, but the larger part is certainly Viserys just watching all his hard work and plans unravel before his eyes. Every episode, he is thwarted – by Daemon, by fate, by Rhaenyra or Corlys or the small council or any number of factors. His dreams don’t come true. He is trying to hold everyone together, build peace and security through marriage and unity, but things fall apart.

And they fall apart with Ser Criston Cole. Yes, that handsome little knight’s heart broke, and so he broke Laenor’s beloved’s face. The seven days of feasting all vanish in one hurried, hush-hush ceremony, not twenty feet from the pool of blood on the floor where Ser Harwin Strong lay. His attempted suicide at the end is interrupted by Alicent, and I’m looking forward to seeing what develops between them in the latter half of the season.

For now, we bid adieu to Milly Alcock and Emily Carey, both amazing actors with a lot of promise. I’ve been waiting for Emma D’Arcy to take the stage, and this coming Sunday, she will! Good times, my friends, good times are ahead.

For us, I mean. Not for Westeros.