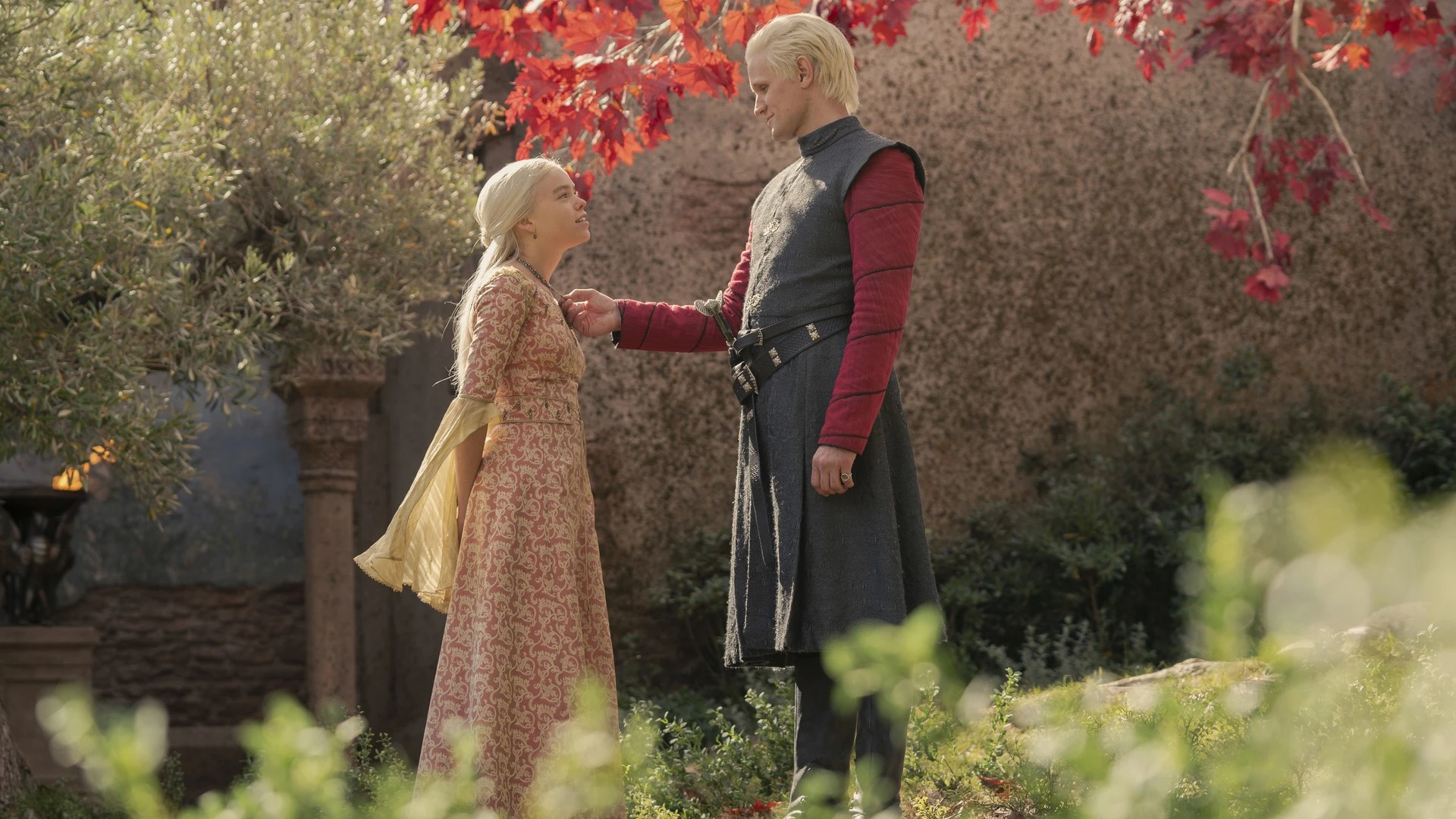 House of the Dragon, Ep. 4 “King of the Narrow Sea”

Spoilers ahead, friends. And some difficult sexual discussion.

I feel, this week more than others, at a loss for where to start. Normally, I try and create a preamble, something to ease the reader in. But after the events of House of the Dragon this week, I find myself struggling to write a fitting opener.

In a sense, that a show can reduce my review’s opening to a mere stammering is a sign of it’s strength and quality. “King of the Narrow Sea” took out the heavy trauma bats with the paired sex scenes (Alicent x Viserys, Rhaenyra x Daemon/Ser Criston). As much as the internet fawned over Daemon’s new haircut, it’s undeniable that his behavior in the pleasure house was abuse, was grooming, was manipulative, and was wrong. There is not amount of “but that’s just Targaryens doing Targaryen things,” to justify his behavior in the scene.

So let’s get into it. We have been told, time and again, that the Targaryens have a history of inbreeding, of marrying closely within their family and allied Valyrian families. In Game of Thrones, Cersei and Jamie Lannister use this to justify their relationship, at least, at the beginning. As the show progresses, they make the simplest, most reduced romantic statements regarding how they feel for each other – “we belong together,” “we came into this world together,” and the like.

But let’s think about how we’re introduced to Cersei and Jamie’s relationship. In the first episode, Bran climbs the tower, sees them having sex, and thus sets off the inciting moment for the war between the Starks and the Lannisters. Cersei and Jamie are siblings, yes, but they are adult siblings. There is the clear indication (and reminder as the show moves forward in time) that they’ve been romantically involved for a very long time.

Now think about House of the Dragon. In the span of four episodes, Rhaenyra goes from the reeling birth trauma of her mother to a sexualized individual. Yes, there are the time jumps, establishing a 2-3 year span over those four episodes. Yes, the sex scenes in episode four were directed and choregraphed by women, to underscore and highlight a woman’s perspective in a brothel, in moments of intimacy, during sex. Yes, it serves as a mirror to Game of Thrones – brother and sister, niece and uncle.

But the contexts are alarmingly different. With the Lannister twins, there is romance, there is passion, there is unbridled sexuality between them. With Daemon, his entire motive is exposure – exposing Rhaenyra to the world of sex and to the world at large, as we see with Otto Hightower’s spies. Game of Thrones showed us a sexual world with an admittedly male perspective – willing sexual partners, exciting whorehouse scenes, throes of intense passion, sexual adventurism and comedic bedroom moments (Pycelle’s bed-clothed monologue comes to mind). House of the Dragon, with it’s first sex scenes, upends all of that. It shows us a fearful and unhappy Alicent, pinned beneath her husband, “stuck in a castle and forced to pump out heirs,” as Rhaenyra so cruelly put it earlier. It shows a sexually-abused Rhaenyra acting out with Ser Criston Cole, modeling what so many of us who work with teens know as trauma response. The sexual world of Westeros is transforming, before our eyes, into one of sexual violence, trauma, and patriarchy.

Daemon tries to shove this under a rug. His mini-monologue where he attempts to prove that people have sex for pleasure too, not just for reproductive purposes, may be factually correct, but that’s not where his intentions are. Daemon’s lies are always cloaked in the truth – his attempted violation of Rhaenyra is a prelude to his marriage proposal under Viserys’s knife. Men, as it turns out, will say anything, do anything, to get what they want.

I say “attempted violation,” because according to the showrunners, Daemon and Rhaenyra never actually have penetrative sex. In the after-show discussion with the producers and actors, they say he can’t get it up, because Rhaenyra starts to like it. The sexual tension the producers claim to have been establishing from the first episode (where he slowly drapes a Valyrian steel necklace around Rhaenyra) comes out here, but it kind of blows up in Daemon’s face. The producers say he needs to be in control, have the power, be in charge. And Rhaenyra’s willingness to share in that power, her arousal at his sexual aggression, completely counters his own arousal.

Had I not continued watching after the teaser for next week’s episode, I would not have known that. The scene is dark, and mostly shot above the waist. Camera angles cut and move sharply around Rhaenyra and Daemon, making it difficult to understand what happened. The revelation that there was no sex between them also recontextualizes later scenes in the episode. Rhaenyra is (strictly speaking) telling the truth when she says Daemon and her did not have sex. But if you didn’t know that, it makes you feel differently about her as a character.

When it comes to sexual abuse in a TV show, clarity is everything. The confusing nature of what did or didn’t happen changes the meanings behind them. I understand that there is essential mystery to telling a story week to week, that each episode uncovers layer after layer. But House of the Dragon is different. There are interviews with showrunners and cast members after each episode that change the context of what we watch. The story of the Targaryen civil war is known to fans who’ve read the books. There are massive Wiki articles about every Targaryen in this timeline. So when the story is known fairly well, it is on the show to make changes or not, to create or distort narrative truth. For House of the Dragon to be even a little bit unclear, to invite a smidge of speculation, invokes the twin forces of shock and drama (both of which, I might add, have proven very profitable for HBO).

My fear is that, without clarity, what we see on a show like this can begin to feel like manipulation. And people are deservedly angry when they recognize they are being manipulated. So I’ll end here, hoping next week opts for more clarity in episode, not out of it.