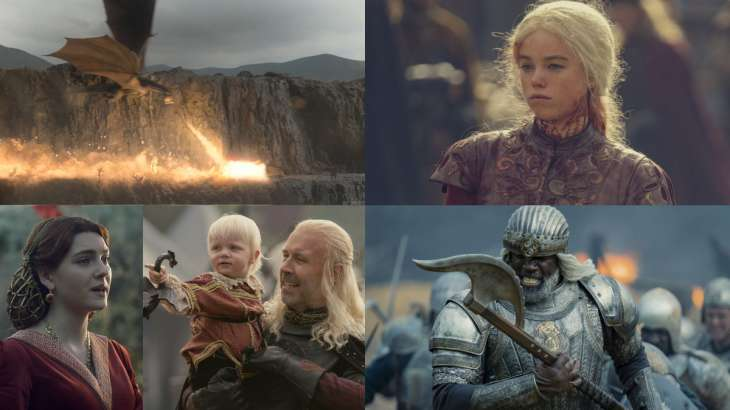 House of the Dragon, Ep. 3 “Second of His Name”

If you’ll recall from my earlier reviews, Game of Thrones suffered greatly from what I like to call the “mid-season slump.” Most seasons presented us with something new and exciting at the beginning, but then slackened as the season went on. TV is formulaic – the season finale is where you save all your big reveals, dramatic moments, epic battles, etc. But viewers often felt starved for quality content in the middle of seasons. There were occasional moments, lines of dialogue or beautiful scenese that made feeling stir within us. But by and large, those were reserved for pilots or finales.

House of the Dragon, it seems, is taking a very different approach. Episode 3, “Second of His Name,” is so jam-packed with content, it’s impossible to make the slump argument! Regardless of whether or not you like the time jumps, regardless of how you feel about the King or the dragons or the war in the Stepstones, you won’t be able to deny that stuff is HAPPENING in this episode. After the credits, the producers and director focus on what their goals were, specifically along the lines of character development. According to them, Viserys, Rhaenyra and Daemen all change a great deal from start to finish in this episode. It presents each of them with their own crucible – a male son, a royal hunt, and a seaside battle, respectively – and the elements essential for their transfiguration.

Viserys’s growth is a little sketchier to track, given his obsession with his dream. The overall nature of prophecy as it relates to Targaryens is a thing, and viewers new to the franchise may need to watch a few Dany clips on YouTube to really get it. So when Viserys is forced to contend with a regular hart instead of a white one, he is making a layered choice. He is choosing reality over prophecy, Rhaenyra over Aegon II, and family over kingly honor. It’s why he ends up sending aid to Daemon (whose refusal of said aid we’ll get into, for sure). The Viserys who comes out of episode three is developing, conflicted, but driven forward.

When I first saw trailers for House of the Dragon, part of me wondered how much of a focus would be placed on Rhaenyra. I was excited for the prospect of watching her coming-of-age story, but the more I watch, the more I remember what the Game of Thrones franchise is built on – the complex political drama of this world. Rhaenyra is a large part of it, but only one part of it. Still, episode three works hard to give her the glory of a lead role. Rhaenyra literally breaks convention as she leaves camp, overcomes adversity in the face of a wild boar, and is rewarded by the very same prophecy Viserys forgoes, the face-to-face encounter with the regal white hart. This is textbook bildungsroman content in an hour and three minutes. Rhaenyra starts at the bottom (in her own eyes) – the arrival of Aegon II is like a ticking clock for her, ready to detonate her role as heir in an instant. She ends reaffirmed as heir by the end of the episode, and more – Viserys makes it clear he wants her to be happy, to choose her own consort. Power and privelige define who she is going into episode four.

This bring us to Daemon. When the episode starts, the war in the Stepstones is not going well. The Sea Snake’s forces are faltering under Daemon’s leadership, the dragons are making little impact on their enemy, and the Crabfeeder is just confusingly gross and weird. But that all changes the moment the news of aid from Viserys reaches the prince. Daemon knows this war is his chance to prove himself, to show Westeros what he’s made of. So he goes along with the Valeryon strategy, a suicidal walk on the burning beach, and achieves victory. There are levels of repercussions to recognize here – a major victory for his forces in an era of peace means he’s got the largest force of battle veterans, there’s the PR victory, too, the freed shipping lanes mean Corlys has money to back Daemon even more aggressively now, and of course, the pending conversation between Viserys and Daemon will be…interesting. The strength of the rogue prince increases dramatically in episode three, readying him for the greater conflict ahead.

All of this wouldn’t be possible without the two-year time jump between episodes two and three. I’m shocked they were willing to go that far ahead, but it’s paid off for the show. Hard as it might be to trust these producers after the eight season debacle of Game of Thrones, it is getting easier to trust them in House of the Dragon. A two year jump sets up tension and pent up emotion for characters to resolve and act through for the audience, and they do so perfectly. Amazon’s The Rings of Power may be giving them a thorough run for their money right now, but HBO and the team behind this series are biding their time. Dragons every episode, time jumps for character growth and narrative drive – they aren’t settling in for a mid-season slump with this show. Let’s see how high they can keep the action in next week’s episode.